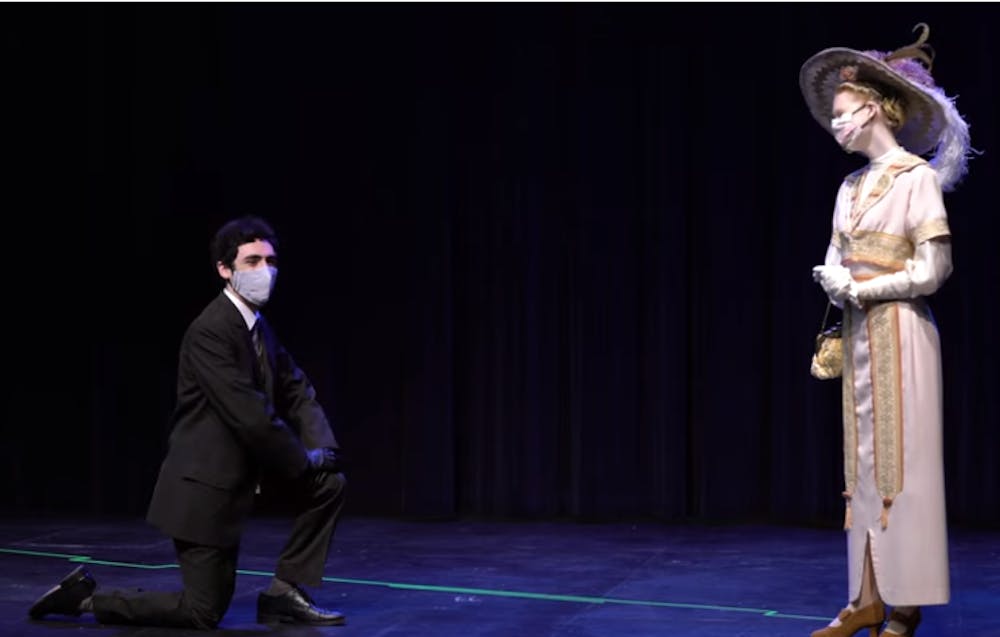 Rice Theatre will premiere a livestreamed performance of Oscar Wilde’s “The Importance of Being Earnest” this Friday, Oct. 9 at 8 p.m. CST. The play, originally published in 1895 with the subtitle, “a trivial comedy for serious people,” narrates the double lives of two men, John Worthing and Algernon Moncrieff, who both pretend to be named “Ernest” and deceive their lovers in doing so. Directed by Christina Keefe, director of the Rice Theatre Program, the production will be available to view online as well as to a select live audience who must abide by Rice’s social distancing protocol. All actors will be wearing masks and remaining at least six feet apart on stage, painting a stark portrait of how the pandemic has changed performance art.

“One of the many unfortunate fallouts for the country is [that] the arts and theatre is especially struggling because it is a format that, in its nature, requires a live audience … it’s a communal experience,” Keefe said. “[And so] every theatre program in the country has been going through this real struggle with, how do we continue to [stay] alive? And how do we continue to grow in a time where it's not safe for us to be together, at least not together in the way that we know it?”

According to Keefe, the theatre program selected “The Importance of Being Earnest” specifically because of how it could be executed while adhering to restrictions presented by social distancing. Unlike their original plans of producing a musical, the story and stage directions of this play would more easily allow actors to stand further apart without changing as much of the original work.

“I started to wrack my brain with what [we could] do that would fit this world of masks and physical distance. So, the Victorians came to mind,” Keefe said. “There was very much a sense of style and manners ...  there [were] servants, there [was a class structure, so] people don't necessarily have to get super close together. I think ‘The Importance of Being Earnest’ is probably the closest that I can come to still retaining the sense of wit and fun of the play without it being so close.”

Some components of the script still had to be adapted, however. Stage manager Claire Boschert said that some of the props and set designs originally described by Wilde had to either be simplified or omitted for the safety of the cast.

“There's a lot of food in this play. It's late 19th century, upper-class England, [so] they go to each other's houses, and they drink tea, and they have muffins and cake and bread and butter,” Boschert, a Lovett College senior, said. “But you can’t eat with a mask on … [so] we’re handing around empty plates.”

In addition to changes in the set, every other aspect of the play had to accommodate the new guidelines of the pandemic as well. Rehearsals the week before the show were reduced from their regular 12-hour duration to three and a half hours, everyone had to wear face shields during costume fittings and the first few weeks of rehearsal were conducted over Zoom calls. Wiess College sophomore Alejandra Wagnon, who plays Algernon Moncrieff’s love interest Cecily Cardew, said that learning to act while social distancing was especially challenging at first.

“The first couple rehearsals were definitely … a process to get adjusted [to]. I think especially in theatre, you get very used to having to get close to people. And so we would constantly have to make sure we were checking ourselves,” Wagnon said. “But honestly, this has been one of my favorite shows that I've ever worked on, not only because [of] the show itself … but because the process of working on the show has really reminded me that there are people who are willing to sacrifice things — like the comfort of being less than six feet apart, the comfort of not having to wear a mask — things like that in order to come to a collective goal.”

Aside from the changes caused by the pandemic, Boschert described “The Importance of Being Earnest” as uniquely more comedic than some of the other productions put on by the theatre program in recent years.

“Oscar Wilde loved triviality and just letting loose in daily life,” said Matthew Alter, a Wiess freshman who plays John Worthing. “It’s hilarious, and I love that. And what I want people to take away from the show after seeing it is that they don’t have to be so uptight, serious, especially now with all of the seriousness that is happening. It’s important that people realize that they can, you know, let loose, and that’s what theatre does. It entertains. It takes away your stress for a couple hours.”

While much of the theatre program’s plans for the next semester remain unclear, some of their events have already been modified in response to the pandemic. For instance, their annual playwriting competition and Play in a Day, an event where writers, performers and directors all stage a play in the span of 24 hours, will be hosted entirely digitally. This transition to remote platforms does pose some challenges to the program, but Alter said that he thinks the situation makes theatre even more important.

“With COVID happening, it’s so important that we keep theatre alive for the industry [because] it’s a moment in time,” Alter said. “The Romans did theatre to reflect their political victories and things like that, so theatre reflects what people want to see. It’s very indicative of the culture. And right now, we’re putting on a show with COVID. And so for better or for worse, it’s like a staple of this time period … Moving forward, I think that hopefully we’ll be able to come back and see this very short timeframe, and see the theatre of COVID.”

Rice Theatre’s production of “The Importance of Being Earnest” will be live streamed on the Rice University YouTube channel on Friday, Oct. 9 at 8 p.m. CST.