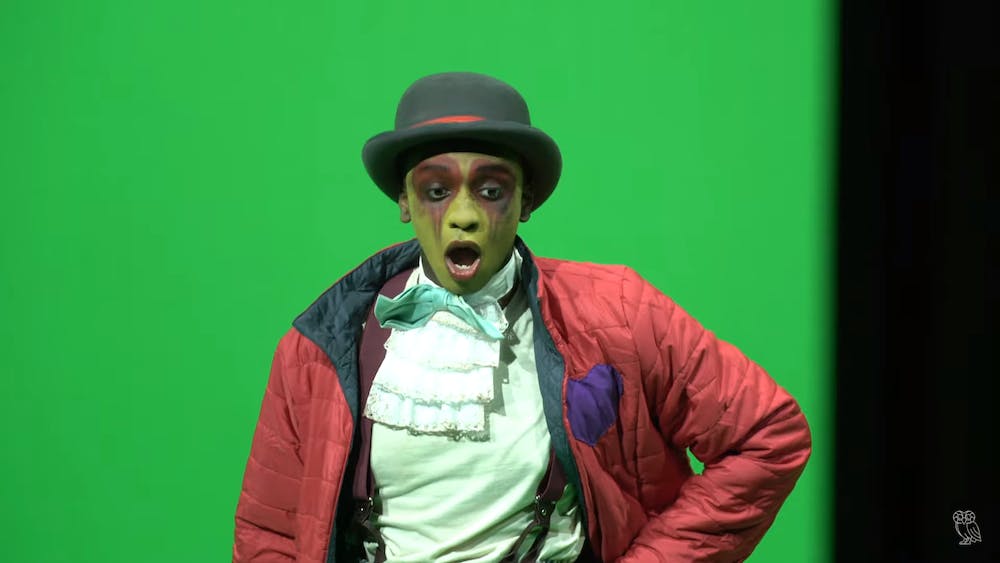 When ground broke in 2017 for the construction of the Brockman Hall for Opera, no one could have predicted that the first show in the new hall would be one without an audience. The new hall, equipped with a three-tiered, 600-seat European-style theater, the first of its kind according to the Shepherd School of Music’s website, amongst all U.S. conservatories and universities, will be completely empty for its pre-recorded and lip-synced showing of the little-known chamber opera: “Der Kaiser von Atlantis.”

“Der Kaiser von Atlantis” follows the story of, as the title suggests, the supreme ruler of the fictitious city of Atlantis. Overcome with power and greed, he declares the entire world at war with itself and orders the people of the world to kill each other senselessly. The personification of Death steps in to punish Kaiser for misusing death as a tool for tyranny by making the world population immortal, but with the agonizing burden of still being able to be mortally wounded.

The plotline of this production, however, is nothing compared to the story of the operas’ composition and its survival through Nazi concentration camps.

According to graduate student Shannon Keegan, who plays Der Trommler, the opera almost didn’t survive its way through the Holocaust.  Der Trommler, which literally means “the drummer” in German, sort of acts like the Kaiser’s microphone, announcing his messages to the audience.

“[‘Der Kaiser von Atlantis’] was written in the concentration camp in Terezin, during the Second World War, as a part of the smoke screen the Nazis would put up for the Red Cross when they would come and look at the camps. [‘Der Kaiser von Atlantis’] was a project put together by the composer Viktor Ullmann and librettist Peter Kien, who were both Jewish prisoners at Terezin.”

However, the opera never premiered at the camp. After Nazi officials attended the dress rehearsal of the show and saw the almost direct criticism of Hitler in Ullmann’s portrayal of the Kaiser, they canceled all performances and sent all personnel involved, including Ullmann and Kien, to Auschwitz, where they perished in the gas chambers. Miraculously, Ullmann’s work was smuggled through the camp and was pieced together after Germany was defeated and the camps were liberated (Operavision.eu)

Keegan said he feels this opera is relevant today given the current political climate and the current pandemic. The opera deals with the overconsumption of death as a tool for political power and, at a time when almost 8.7 million Americans have caught the virus that has killed 230,000, the plot hits a little too close to home for many.

This macabre background of the opera, coupled with its small character list of only seven cast members and small chamber orchestra made it a timely performance given current COVID-19 regulations. Luke Sutliff, a graduate student who plays Der Kaiser, described the completely foreign process of filming and lip-syncing the opera for production.

“After a week of staging, we had to be filmed and green-screened, all with socially distant staging,” Sutliff said. “We recorded all the orchestra tracks weeks prior, then we got individual takes of specific scenes with the orchestral audio playing. Then, they would play back our voices and the music and act it out and lip-sync what we had just recorded.”

The stage will also be equipped with a giant green screen set, which will later be superimposed with a 3D Chromadepth version of the actual set that would have been used in a live production.  This gives the viewer at home the ability to put on 3D glasses, watch the show, and feel like they are in a live hall because of the computer-added Chromadepth.  Even the performers were dressed according to this.  They are all wearing bright, sometimes neon, colors in order to fully “pop” out of the screen.  The viewer also has the option to watch the opera in 2D, in case they don’t have a pair of 3D glasses on hand.

Both Sutliff and Keegan said that while this virtual version of opera was no replacement for the magic of a live show equipped with an in-person orchestra, massive sets and a giant chorus, it still presents a lot of positives. The opera is now fully viewable from home and at a much cheaper price than a traditional opera, giving viewers more access and flexibility in their mode of viewing the show.

To reserve a free ticket for performances of “Der Kaiser von Atlantis,” on October 29 and 30 at 7:30 p.m. CT, go to: https://music.rice.edu/form/der-kaiser-registration.