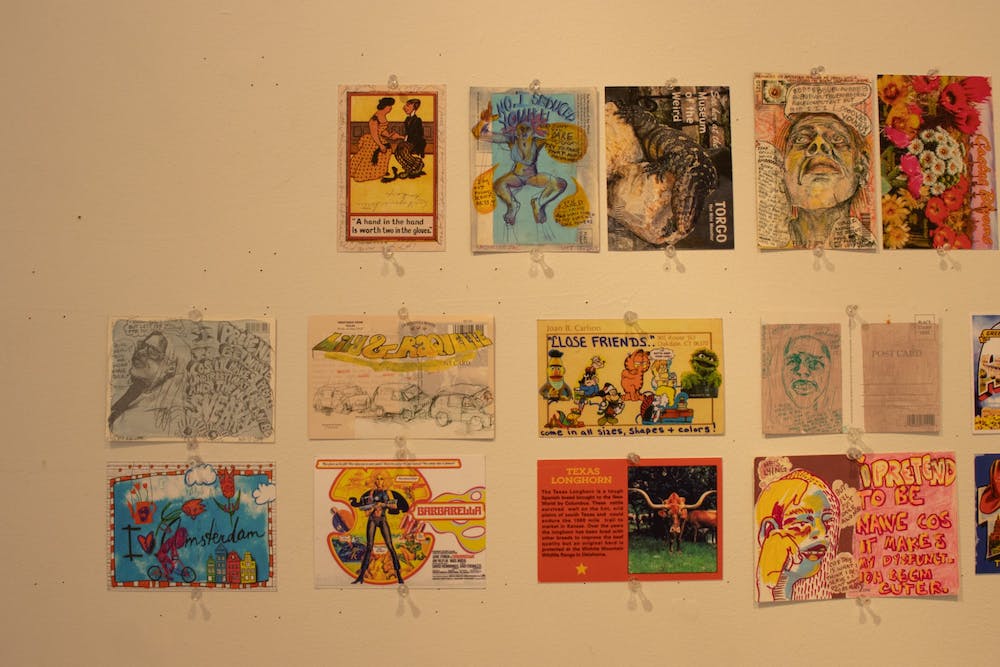 “Proud Late Bloomer” by Raquelle Jacqueline is the latest exhibition at Rice’s student-run Sleepy Cyborg Gallery. On view from Oct. 1-15, the collection’s main piece was a 41-page autobiographical coming of age comic titled “Misguided Love,” viewable only to in-person visitors at the tiny gallery in Sewall Hall. The solo exhibition also includes Jacqueline’s illustrations on postcards she collected during the travels she narrates in the comic, and short interviews available on Sleepy Cyborg’s website.

The eye-level, letter-size pages of dense scribbles stretched horizontally on two walls opposite each other, united by a common hot pink color and telling a story of Jacqueline’s candid inner thoughts on young love and introspection. Originally from Midland, Texas, Jacqueline now lives in San Diego for an art residency at the Nottingham Center for the Arts, where she is exploring the artistic medium of pottery for the first time. In an interview for the exhibition, Jacqueline said she created “Misguided Love” in a month and a half during what she called “a race to the finish line” to make her deadline. Her work paid off — the comic is the anchoring piece featured in comic publisher Fantagraphics’ “Now #9: The New Comics Anthology,” which released Aug. 4. The Eisner-award winning anthology series describes the subject-matter of Jacqueline’s piece as “ping-ponging among relationships, hospitalizations, internet ‘fame,’ international travel, sex, romance and trauma.”

“It was my first long narrative piece, so there was a lot of experimentation that I did while working on it,” Jacqueline said in her interview. “I was given the choice to make something for the upcoming nine issue or hold off and have an additional six months to work on something for the 10th issue. But I was so excited about the prospect of being published by Fantagraphics that I worked day-in and day-out for a month and a half figuring out the story I wanted to tell and making it come to life.”

Gallery Director Isabel Samperio described the process of selecting Jacqueline for the show and being given agency as a curator. She intends for the gallery to be a platform for local artists and underrepresented, underexposed artists or media.

“I had originally found Raquelle through researching artists with connections to Austin,” said Samperio, a Hanszen College senior. “I really wanted to find young artists from Texas specifically, and through a fair amount of searching I found Raquelle’s work through a [University of Texas, Austin] Studio Art alumnus that had previously shown work at the gallery.”

Samperio was given the freedom to set up over 100 pieces of paper in a careful display that preserved Jacqueline’s intention for the piece to be viewed from beginning to end. Careful not to pierce through the art, she rested each page on and between clear plastic tacks in a single horizontal row and set the accessory art pieces above and below it. The latter part of the comic narrates Jacqueline’s travels to Los Angeles, Italy and Amsterdam, so Samperio decided the altered postcards from each location served as great accompanying visuals when placed adjacent to the comic pages that talked about each stop.

At Jacqueline’s request, the only images of her art on the gallery’s website are a handful of pieces selected from her postcard series. Samperio said Jacqueline asked that the core of the exhibition only be viewable in the room itself to encourage people to see it up close. Samperio filled the rest of the virtual space with clips from a video Q&A where she discusses topics such as finding her biggest influences in female comic authors Aline Kominsky-Crumb and Phoebe Gloeckner.

“I felt it would be so valuable to hear more from Raquelle because of the highly personal nature of her work, so I’m really grateful that we were able to interview Raquelle, and that that interview became a part of our virtual programming,” said Samperio.

“Comics combine the two things I’m really good at: art and writing,” Jacqueline said regarding her choice of medium. “[It] is a way to organize my thoughts. I love the order and the frames. Even though my work is chaotic, there’s still order, there is still a narrative. There’s something so peaceful about that … Above all, that’s what I like about it: it’s a way to make myself feel heard.”

Samperio agreed. The unifying visual element is the heaping on, the revisitation again and again till each page overflows with words and stimuli. It’s the perfect way to convey a main message: human experiences are complex, justifying fixation and reevaluation.

“There is a strong embracement of ‘mess’ that I think serves her work really well, and adds to this sense of history with each page,” Samperio said. “There is so much depth; you could spend hours absorbing it all, really.”

The in-person component of “Proud Late Bloomer” has closed, but Jacqueline’s interviews and postcard art are available for virtual viewing at matchbox.rice.edu.