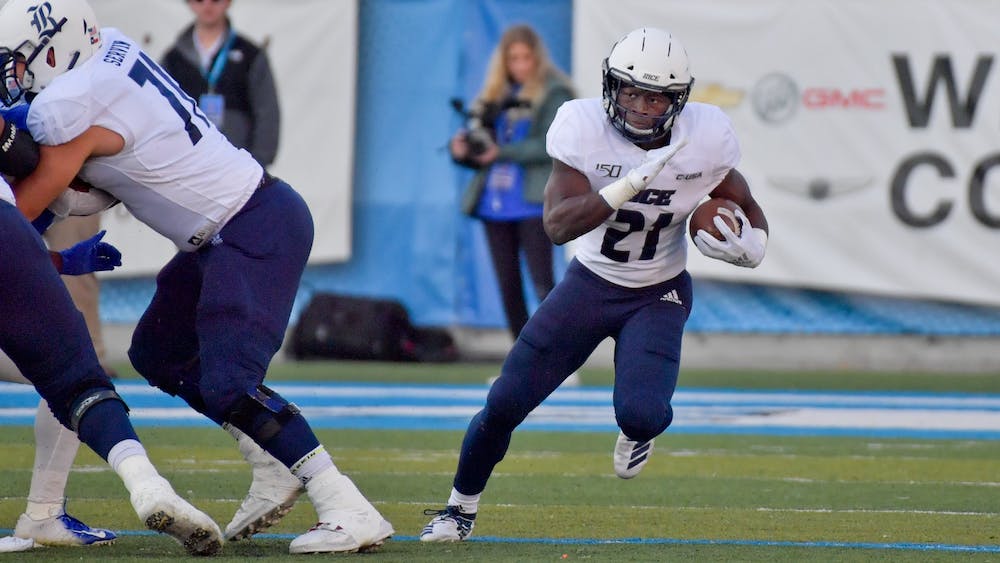 “We’re not the same offense that we were in 2018,” Mack said. “We’ve learned how to manage these guys, what their strengths and what their weaknesses are, and [how] to put them in better positions to be successful.”

While the team returns five starters from last year, it will have new starters at the other six spots. According to head coach Mike Bloomgren, the team is prepared for this turnover, and confident in its new players’ ability to contribute.

“We added 30 new players [this offseason],” Bloomgren said. “We’re gonna have some of those guys play some really key roles for our football team.”

The Owls are coming off of a season that saw them rank No. 13 out of 14 teams in the conference with 17.9 points per game. That number jumped to 27 points per game over the last three games of the season. According to Mack, building off of that strong finish will be key to the offense improving this year.

“The biggest thing [we need to] continue to understand what helped us win those last few games of the season,” Mack said. “[We need to take] the energy and the passion that we came out with, and try to compete with it every week.”

Bloomgren’s offenses tend to focus heavily on running the ball. Last year, the Owls ran the ball 35.9 times a game, compared to only 26.6 pass attempts.

In the passing game, there are question marks too. Wide receiver Austin Trammell will reprise his role as the team’s do-it-all receiver. Trammell, who can line up both in the slot and as an outside receiver, has led the team in receptions each of the last two years — with 62 and 60, respectively. Trammell said that his familiarity with Bloomgren’s offense should help him improve off of his past success.

“It being the third year in the system, guys know everything much better, we’re comfortable, it’s second nature now,” he said. “It’s going to be an exciting year.”

Last year, Rice was plagued by uncertainty surrounding the quarterback position all season. The Owls used three different starters over the course of their 12-game season before eventually settling on Tom Stewart. This year, they hope to have found more stability at the position. Rice will turn to Mike Collins, a graduate transfer from Texas Christian University, to be their signal-caller.

Collins began his college career at University of Pennsylvania before joining the Horned Frogs in 2017 after his freshman season. At TCU, Collins threw for over 1,100 yards, including 1,059 in the 2018 season, during which he made four starts. According to Bloomgren, Collins, who won the starting job after a competition with redshirt freshman JoVoni Johnson, has impressed the coaching staff throughout the offseason.

“Mike has just been a head above, and not just on one day, he’s been consistent throughout camp,” Bloomgren said. “He’s executing our offense at a very high level, and he’s got an unbelievable arm.”

Collins said that he has faced challenges coming in as a transfer, especially in this strange offseason, but credited his teammates with helping him adjust.

“It’s interesting because you’re the new guy but you’re also the quarterback so you’ve got to have a voice,” Collins said. “So it’s a fine line you have to work with, but the guys have been great and really embraced me.”

Otoviano is returning from an injury-plagued 2019 season that saw him miss nine games due to injury, and retain a medical redshirt. This season, Otoviano said that he is focused on remaining healthy, and building off of the promise that he showed as a freshman.

“Personally, [my goal is to] stay healthy and have good games day in and day out,” Otoviano said.

According to Mack, these explosive plays, both in the running game and in the passing game, may end up setting this offense apart from Rice’s offenses in previous years.

“Explosive plays have been something we’ve really prided ourselves on this fall camp,” he said. “We’ve been able to generate more explosive plays [than any year in the past].”

Improving the offense will be crucial if the Owls want to improve from their 3-9 record last year. According to Collins, the offense knows this, is focused on doing whatever it takes to win games.

“Our goal is just to score more points than the other guys,” Collins said. “That’s all it really comes down to.”