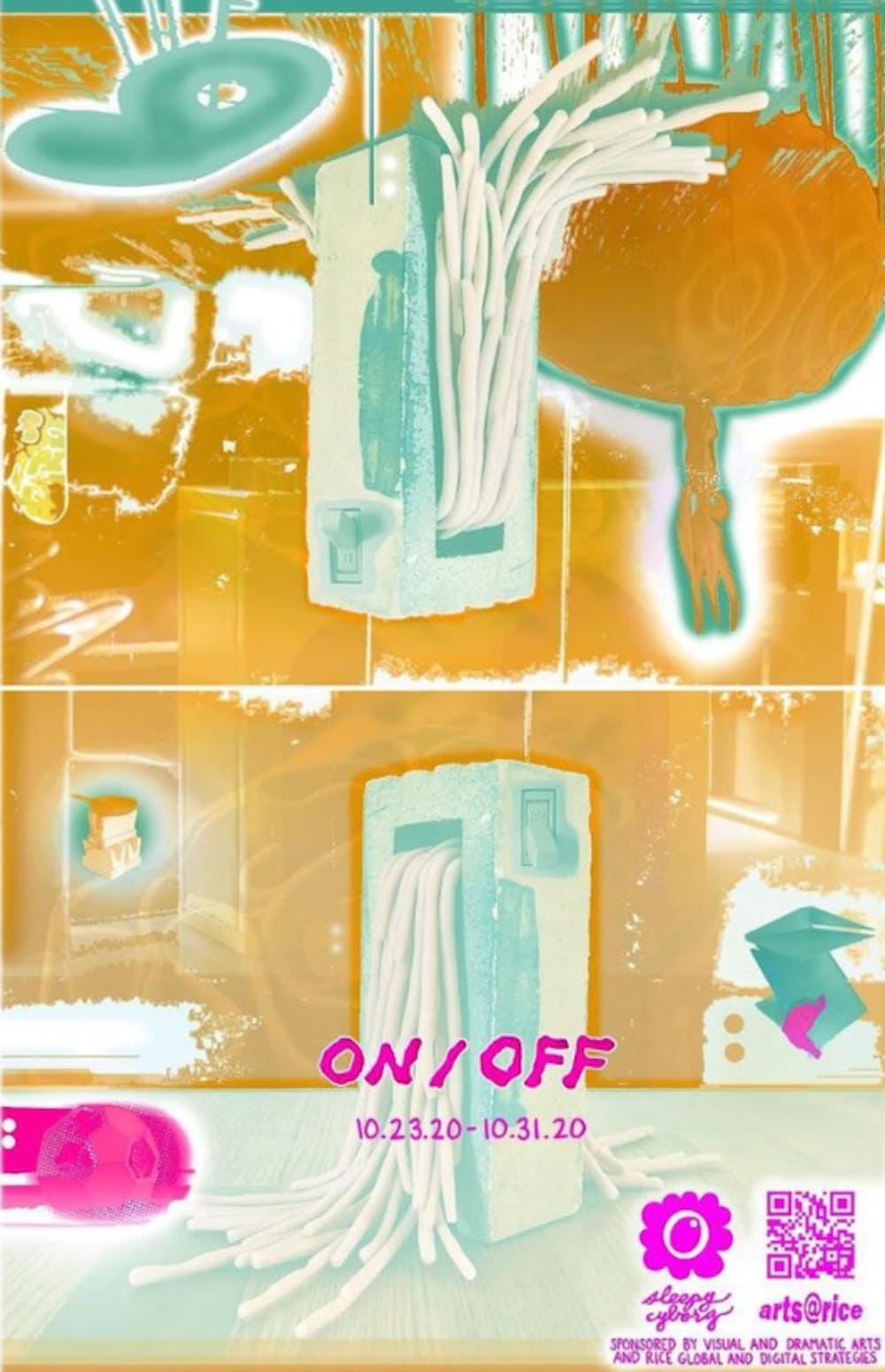 Various artworks will be presented in several spaces throughout campus, all of which are mapped on the ON/OFF interactive website. The show’s principal location will be the Sewall Hall courtyard, which will hold an opening reception and performances by a string quartet and the Marching Owl Band throughout the week. The other locations for viewing sculpture pieces include The Hangout near Fondren Library, Herzstein Hall, Seibel Servery and the Rice Community Garden.

The show was designed to provide multiple channels for student expression and ways to showcase Rice campus’s unique vivacity. To-be-announced performances will be livestreamed with a 360-degree camera in the Sewall Hall courtyard, and the camera will stay on throughout daylight hours for the whole week. The organizers encourage campus visitors to make impromptu performances or monologues for the Sewall Hall camera, and remote students are encouraged to respond by recording and submitting their own performances to be integrated into ON/OFF’s website and social media content.

While each site will start with two or three sculptures, Sleepy Cyborg Gallery Director Isabel Samperio said each of the nine locations are intended to be additive — students can go to each site and place their own sculptures there to make their own mark on the exhibit. According to a press release from Sleepy Cyborg, the ON/OFF digital map will link to media galleries for each location, which will become increasingly populated as students tour the show and submit photos of their experiences and interactions with the exhibits.

The show is a compromise between the artists and 2020’s challenges. Gabriella Feuillet, a Sid Richardson College senior, said ON/OFF is both a substitute for and a reaction to a showcase that was supposed to happen for her sculpture class in March but was cancelled due to the pandemic. Assistant Professor of Sculpture Lisa Lapinski encouraged her students to still make it happen and supplied a budget for the numerous associated expenses. The show is now dually sponsored by VADA and Rice Global and Digital Strategies.

“[Lapinski has] really been our mentor throughout the whole sculpture show,” Feuillet said. “It was her idea over the summer to take the work that we’ve made and show it in some way. It’s a delayed conclusion to that semester but now it’s turned into something bigger — we’re really trying to involve on-campus and off-campus groups.”

Feuillet credited the name ON/OFF to her sculpture classmate Sophie Parker, a Will Rice College senior, who chose it to point out multiple dichotomies: The show is for on- and off-campus students; lives are lived online and offline with in-person and virtual components to nearly every experience now. ON/OFF will straddle that divide by hosting community-sourced media galleries of each location.

“It's more interesting to let go of agency over the show after we've set it up,” Feuillet said. “We've put so much energy into planning and structuring it that I feel now the interesting part is seeing how people interact with it and what people record on video and what it becomes on its own in the Rice community.”

Samperio, a Hanszen College senior, said student organizers Ethan and Braden Perryman both contributed to the idea of capturing how the weather and fauna will play with the installations.

“Ethan purchased game cameras, so we have a few of those,” Samperio said. “One thing that Braden was really interested in was how squirrels or animals would interact with these objects, especially locations like the garden that are more nature-y.”

Baker College senior Ginny Jeon said that she is in the process of evolving her project for last semester’s sculpture class into something consumable on a large scale. She originally made four collapsible card stock boxes, but now is on the way to making almost 400 to be given out during the show.

“The boxes are inspired by [McDonald’s] Happy Meals and Gothic cathedral architecture,” Jeon said. “I wanted to make some sculptural objects that were functional and somewhat classy but also easily disposable to show how design is everywhere and often thrown away. For this show, they'll serve the purpose of holding voting information — and buttons — for anyone who grabs one, and I suspect many of them will end up in the trash after being opened.”

While ON/OFF was conceived as a substitute for a sculpture class’s canceled showcase, by the time it opens it will have embraced many more forms of artistic expression including photography, graphic design, music and narrative. Viewers will be able to engage with art in new ways by observing how wildlife interact with the sculptures, taking pieces home, responding with their own pieces and participating in a scavenger hunt.

See ON/OFF on campus Oct. 23-31, with an opening reception Friday, Oct. 23 in the Sewall Hall courtyard, or online at onnnnnofffff.cargo.site.