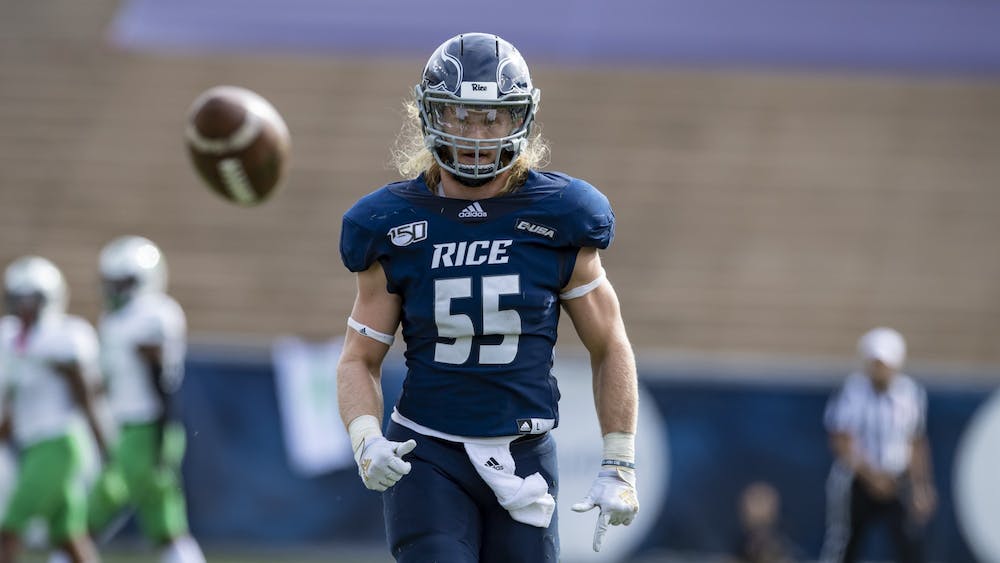 The Owls, currently the only team in Conference USA that has yet to start their season, will face off at home against Middle Tennessee State University, who started their season 1-5. According to head coach Mike Bloomgren, the team is just happy to be on the field.

According to defensive coordinator Brian Smith, the returning starters are a major advantage for the defensive unit.

“[We have] lots of returning starters on defense and guys that have played before in quality game minutes,” Smith said.

Led by senior Blaze Alldredge, Rice’s defensive front seven are ready to continue putting clamps on opposing offenses. Alldredge, Rice’s standout outside linebacker, is primed to, once again, lead not only the linebackers but also the Owls’ defense. Last season, Alldredge had 102 tackles, the most of any Rice defender; 21.5 of those were tackles for a loss, which ranked No. 2 in the NCAA. In addition, Alldredge led the team in quarterback sacks.

Over the offseason, the Rice team captain was placed on the award watchlist for the Bednarik Award, Nagurski Award and Butkus Award, which are all prestigious accolades awarded to the best college defenders in the NCAA.

“Blaze works hard, and is kind of a leader for us in terms of work ethic,” Smith said. “He sets up the tone.”

With Alldredge, and fellow linebacker, captain and senior Garrett Grammer leading the way, the Owls will look to continue their rough and tough defense after allowing 25.9 points per game, ranking No. 49 out of 130 in the NCAA. That strong defense can be partly attributed to the linebackers who were the main engine in a rushing defense that allowed only 138.7 rushing yards to opposing running backs, ranking them as the fifth-best rushing defense in the C-USA. Additionally, Rice’s defense ranked as the fourth-best C-USA defense in rushing first downs, as they allowed opposing running backs, on average, to get only seven first downs per game.

The Owls’ defensive line only lost two players, Anthony Ekpe, who transferred to Ball State University, and Myles Adams, who graduated, since the conclusion of last season. Smith mentioned redshirt senior Elijah Garcia and redshirt junior Kenneth Orji as players who improved greatly over the offseason.

“Elijah Garcia [is a] returning starter, [and we are] looking for outstanding things this year and looking for him to take a big jump this year,” Smith said. “Kenneth Orji, another player who started for us last year, and he may be the most improved guy on our defense.. [We are] looking for big things from him at the defensive end position.”

With the abundance of new players, along with the growth of the upperclassmen defenders over the offseason, Bloomgren expressed confidence that this group is better prepared than any other incoming class.

“Because of the Zoom time, because they were able to master the classroom, [the new players] have been able to get to the grass and hit in running, probably better than any group of newcomers we’ve ever had,” Bloomgren said.

Despite going only 3-9 last season, Rice’s defense stepped up against their opponents as they were able to control opposing, high-flying offenses pretty well. Last season, the Owls’ defensive unit had very strong performances against the University of North Texas, who finished third in C-USA for total offense, and Baylor University, the runner-up in the Big 12 conference.

As the Owls prepare for Middle Tennessee, Bloomgren mentioned that the Blue Raiders record does not tell the full story of their season thus far.

“Obviously they’re not where they expected to be with their record,” Bloomgren said. “But aside from their first two ballgames, they’ve had a chance to win every game going into the fourth quarter. All their pieces are there, and I think they will be a challenge for us this weekend.”

An obvious impacting factor is the fact that the Owls have played zero games this season, while the Blue Raiders have played six. According to Bloomgren, having game experience is crucial to development over the course of a season.

“The biggest gains you get in a year are from game one to game two, and all the experience from playing those games,” Bloomgren said.

On the flip side, games can cause injuries, while the Owls’ roster remains healthy.

“The advantage for us is that we’ve had so much time to (prepare), and we’re pretty healthy,” Bloomgren said. “They also don’t know a lot about our new personnel.”

In the end, Bloomgren said, there’s no way to know which team’s situation is more favorable.

“I don’t know which side of it is an advantage,” Bloomgren said. “There’s pluses and minuses to both, we’re going to kick off at 2:35 on Saturday and see how it comes out.”