‘What am I actually going to do with my life?’: Rice’s class of 2020 navigates post-college life amid pandemic 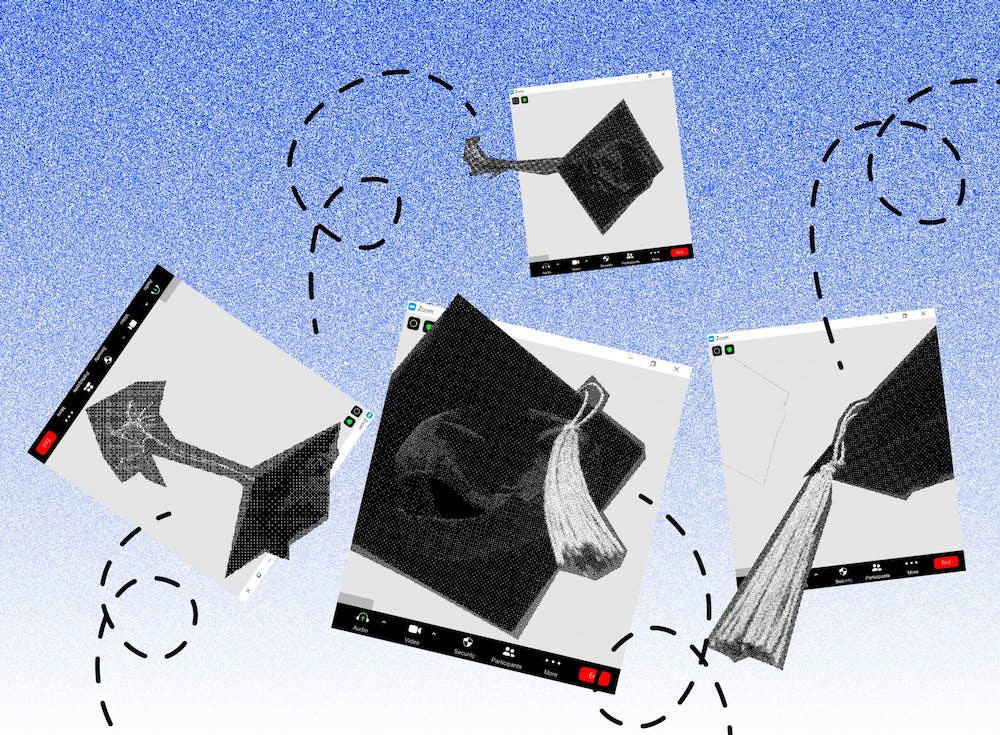 When Dean of Undergraduates Bridget Gorman first emailed the undergraduate student body back in March to announce that classes would be shifting to a remote learning format due to the unfolding pandemic, she took extra care to address the class of 2020.

“For our seniors, this situation must seem especially unfair. Your final semester was supposed to be filled with celebration, a joyous time marking the conclusion of your Rice experience as you prepare to launch on your next life journey,” Gorman wrote. “It is my sincere hope that we will see you back for commencement in May.”

There was, of course, no in-person commencement in May. COVID-19 has gone on to change the world in ways that most people could not foresee back in March. For current Rice students, the pandemic has resulted in a semester unlike any other. But for the class of 2020, it has set the stage for a tumultuous and daunting entry into adulthood. The Thresher talked to alumni from the class of 2020 to see how they’re doing.

The gravity of the pandemic began to dawn on most students when Rice first postponed classes in March. But Grace Wickerson (Brown College ‘20) had insight into how serious COVID-19 was by the end of February due to their role as SA president at the time.

“As I was in those early meetings, everything changed. I was like, oh crap, this is really serious,” Wickerson said. “I actually knew because of those meetings that campus was going to be completely shut down pretty early the day it was announced, and it was hard for me to grapple with that.”

For Claire Telfer (Lovett College ‘20), the reality of how serious the pandemic was set in while she was helping other students move out.

“I was moving people’s personal belongings out of those rooms, and stripping their rooms down to nothing,” Telfer said. ”I was down for the manual labor, but I was not down for the emotional toll of taking someone’s life and putting it in a box for them.”

Anson Tong (Wiess College ‘20), a student getting a master’s degree in behavioral science at the London School of Economics and Political Science, said she feels that there was a major lack of closure for her class.

“There are people that I saw for the last time at Rice, and I don’t know when I will see them again. I had no idea that the last time we spoke was the last time,” Tong said. “Part of me feels like one day I’m gonna wake up and I’m supposed to go back to Houston and finish going to Rice.”

Starting at a new job is a common marker of life after college. But for recent graduates, the experience has been drastically altered by the pandemic.

Anna Ta (Will Rice College ’20) has stayed in Houston after graduating, and she recently finished her first job remotely at the Minneapolis Star Tribune with the Instagram Local News Fellowship. She said she faced a number of challenges working from home, including struggling to separate work life from home life.

“To this day, I still don’t have the experience of going into an office and clocking in at nine and clocking out at five,” Ta said. “I never met any of my co-workers, even though I talked to them every single day. That messed with my mindset transitioning from being a student to being an adult who works.”

However, Ta said the pandemic has made her realize that going after your passions is worthwhile.

Not all students have been able to kick off their careers. Tyson Taylor (Jones College ‘20) has remained in Houston, and he is one of the many students who have had a job offer rescinded as the pandemic affects the job market. He had a job lined up in the fall of 2019 to start working in a project management and financial consulting position in the oil and gas industry until this offer was rescinded.

“It was a bummer at the time, but it turned out to be a bit of a blessing in disguise because [my parents] really needed to have an adjustment phase at [their jewelry] business,” Taylor said. “I was happy that I could use the knowledge that I accumulated at Rice engineering to help them out.”

Four months after graduating, Wickerson is still navigating situations for which they weren’t prepared. They are currently studying material sciences and engineering at Northwestern University, which they said has been isolating.

“I had thought about ways that my adult life would look,” Wickerson said. “The ways in which I would meet new people, work and start to form professional relationships. Everything has not really been able to take off the way I thought it would.”

Daniel Martinez (Brown ‘20) is at home in Laredo, Texas, trying to figure out his next move. Looking back at the 2008 economic recession and the data from graduates of that year, he said he thinks the best option for him right now is graduate school. He has been applying for several job interviews and is applying to graduate school programs as well.

“The rejections keep coming,” Martinez said. “There’s definitely that element of anxiety and uncertainty that’s, ‘Okay, what am I actually going to do with my life?’”

Those continuing their studies in higher education have also continued to face challenges because of social distancing protocols and remote learning. Johannah Palomo (Wiess  ‘20), a graduate student studying sociology at University of North Carolina, Chapel Hill, said she has been attempting to establish repertoire with her cohort over Zoom. She said it can be difficult to connect with older students and professors, and mimic face-to-face interactions over video calls.

Even with these complications, Palomo said she feels lucky to be where she is.

“I feel really lucky to have the safety net that is graduate school,” Palomo said. “It has been frustrating to see my friends, who are brilliant and super smart and wonderful people, struggle to find jobs or have to completely change their plans for after graduation.”

“The world is on fire”

Aside from transitioning to a life after college, graduates have also been struggling with the racial violence exacerbated by the pandemic. Summar McGee (Hanszen College ‘20), a graduate student at Brown University in the American studies department, said she feels like “the world is on fire.”

“The things that you think you would think about after graduating, we didn’t really have a chance to think about it. We still don’t,” McGee said. “You have things that are specific to graduation or young adulthood, the everyday concerns of not getting coronavirus or dealing with sickness or death … or the onslaught of racial terror that is the United States of America. So I don’t have much time to think about milestones.”

McGee said it can be mentally taxing to be isolated from people during this time.

“Being isolated from people and not being able to touch people that you love, it’s hard,” McGee said. “For me, culturally speaking, when we deal with grief, we gather, come together and collectively deal with it. So it’s very hard to not have an avenue to do that safely.”

Similarly, Wickerson expressed worries about social issues, especially the wealth disparity that has been highlighted by the pandemic.

“We’re already in a society that’s deeply inequitable. All the billionaires earn more billions during the pandemic. And yet, so many students and their families are losing money, they’ve lost jobs,” Wickerson said. “What I worry about the most is the real widening inequities.”

However, McGee said she has found resilience amid her despair.

“I wake up in the morning and I scream, and I go on about my day,” McGee said. “When you’re pessimistic about things there also comes a sense of empowerment, because if everything sucks, you have the power to change it or do something about it.”

Despite the difficulties with adjusting to life in the midst of a pandemic, the class of 2020 is finding ways to cope. Telfer said she has found herself in “the middle of nowhere, Virginia” for her job at Merck & Co., a pharmaceutical health care company. She has taken up hiking and taken in a foster kitten, and said she appreciates that she was able to do so because of remote work.

Wickerson has also found companionship by adopting a cat. As a social person, they said they have been struggling with the lack of contact with others, but have been cementing healthy habits to look after their mental health.

“During the pandemic, I’ve gone to therapy, I’ve started exercising regularly, I’ve done some things that, with the time that I have, are my sanity checks,” Wickerson said. “It helps me with my mental well being because there’s just more isolation than there is connection.”

Meanwhile, Charles Davis (Brown ‘20) has been biking more since he got back home. He is currently at home in Jackson, Mississippi, and he wants to pursue a doctorate in ecology and evolutionary biology.

“I try to get out of the house as much as I can,” he said. “A couple weeks ago I did a 100 mile ride. That was super cool, pretty tiring. But it was nice to be alone with my thoughts on the open road. I just try to get away from everything.”

Although Palomo missed out on being able to go to Ireland with the Wagoner Foreign Study Scholarship through the Center for Civic Leadership, which would have allowed her to do research on the Mormon community, she said she feels lucky to have been given the opportunity to spend time with her family over the summer instead.

“I have been really lucky to spend time with my family and loved ones and get close with them in ways that I wouldn’t have had COVID not happened,” Palomo said. “It was like, no you’re going to be home for a month, and then you’re going to move,  so you need to make the most of the month that you have. It was actually imperative that I made a connection with my family.”

Jessica Weng (Brown ‘20) is currently in Rochester, Minnesota for the Mayo Clinic M.D.-Ph.D. program. She said she feels that the pandemic has left her with a greater appreciation for in-person interactions.

“I think before [the pandemic] I took in-person interactions for granted,” Weng said. “Now whenever I see people, even if they’re gone for five to ten minutes at a time, I really miss the human interaction. And I always tell them, ‘Oh I missed you,’ or ‘Welcome back!’ because I’m really thankful for their presence.”

Disclaimer: Anna Ta is a former managing editor of the Thresher.