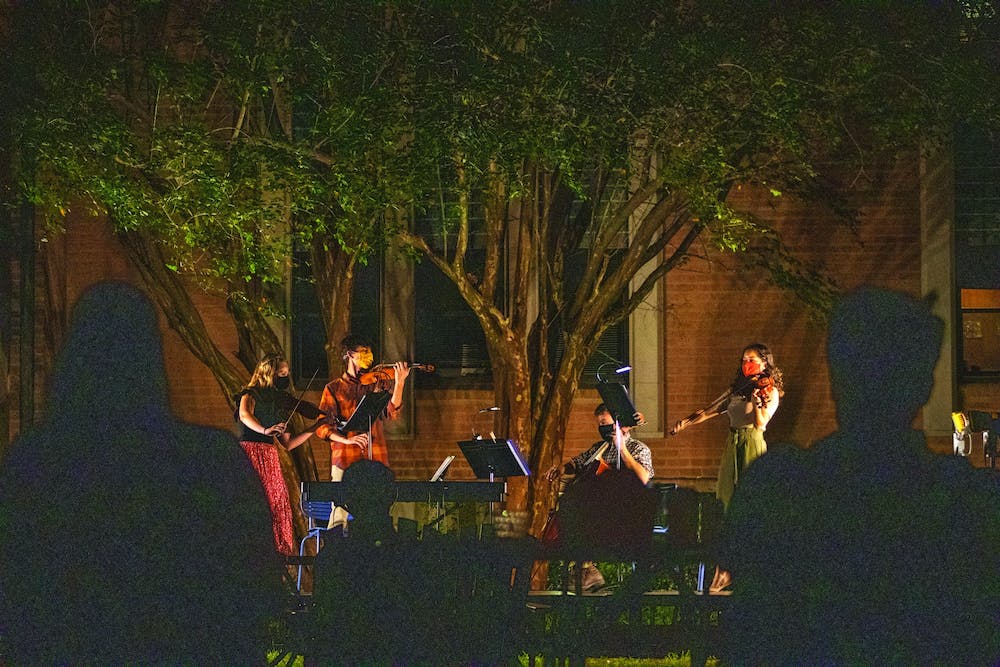 Masked musicians, small groups and livestreaming equipment, all outdoors — the inaugural concert of the Hanszen Family Heart Chamber Music Festival showed us what performance looks like in a pandemic. The concert, held last Friday, Sept. 18 in Hanszen College’s quad, was the first in a series planned to recur on the third Friday of each month this semester, according to festival organizer and horn player Shawn Zheng.

Ten students from the Shepherd School of Music treated their in-person and virtual audiences to an eclectic mix of classical, pop and jazz pieces. Alongside classical works were familiar songs with a new sound — ever heard The Beatles’ “Hey Jude” on brass? — and ethereal tones played by Tomás Jonsson, who masterfully utilized the keyboard’s electronic sound effects for two pieces. Upbeat rhythms, like the jazz standard “Ain’t Misbehavin’” performed by the brass quintet, evoked cheerful gatherings on the dance floor. Before the string quartet played “The Peat Dance” folk song, cellist Nicholas Perkyns told the audience they were welcome to dance, albeit socially distanced.

“I wanted this first concert to have some variety, and you can’t really get much more varied than a brass quintet, a string quartet and a solo jazz pianist,” Zheng, a junior at Hanszen, said. “[There was] something for everybody for this first one.”

Some of the pieces performed were the students’ original arrangements or improvisations. The string quartet’s rendition of “Passacaglia” stood out for its alternating duos: violin with viola and violin with cello. Violinist Allison Smith said her group arranged the piece — which was written for a violin and a viola only — along with another song they played, “The Bones” by Maren Morris.

“We thought it would be fun to incorporate a song that everyone would know, so we took this popular song and figured out our own harmonies and melodies and then put [them] together,” Smith said.

Since Hanszen’s quad has an occupancy of 50 people, 45 chairs for the audience were set up at a distance from each other, and the slots filled up quickly, according to Zheng. Around 25 additional students could watch the livestream on a grassy area near the Hanszen magisters’ house where a projector and speaker were set up to accommodate students on the seating waitlist, according to Zheng. Simultaneously, the concert was accessible to the public on A440.live, a classical music streaming platform founded by a Rice graduate, Smith said.

“I know my family back at home was appreciative that [students] were livestreaming it because before they’ve never been able to watch my concerts at Shepherd live,” Smith, a Baker College junior, said.

The video stream was mostly glitch-free, and the sound and graphics were clear. Based on the concert’s attendance, Rice students’ interest in classical music performance seemed greater than usual, according to Smith.

“[The audience] seemed very excited to be there and seemed very appreciative that we were performing,” Smith said. “I was also very appreciative of them for attending because I know with COVID, it does make things more difficult to attend in-person. The fact that we had a lot of non-musicians in attendance meant a lot too because it showed that people outside the music world are interested too.”

The listeners were not the only ones enthusiastic about the concert. Both Zheng and Smith said that the musicians were eager to perform.

“For me and my quartet, I just felt a lot of joy being able to perform onstage with friends again,” Smith said. “It meant a lot that [Zheng] and the Hanszen magisters [Carlos Martínez-Rivera and Fabiola López-Durán] were able to put this together … I know the musicians were really excited because it’s been so long since we’ve performed [together].”

By bringing these performances to students, the HFH Chamber Musical Festival overcomes the barrier that Zheng says exists between classical music performers and audiences. Moreover, Zheng does not intend to limit the next concerts’ performers to music majors, he said.

“I’ve noticed in my previous two years here that Shepherd really doesn't have too much of a presence … within the Rice community, besides, you know, our concerts at Shepherd,” Zheng said. “And so I … thought this sort of series [would] be a relatively easy way to sort of enhance the social or musical life — or both — within the Rice community at large. Well, now [it’s] just at Hanszen, but, hopefully when everything clears up, we can bring this sort of initiative to other colleges as well.”

“It’s very flexible, but the constant aspect is this idea of a casual neighborhood concert,” Zheng said. “That’s how I would summarize these concerts: [events] to help students take a break from their studying, to chill with their friends in a socially distanced manner, enjoy some refreshments and listen to music played by their peers.”

Watch a recording of last Friday’s concert and tune into future livestream performances at A440.live.