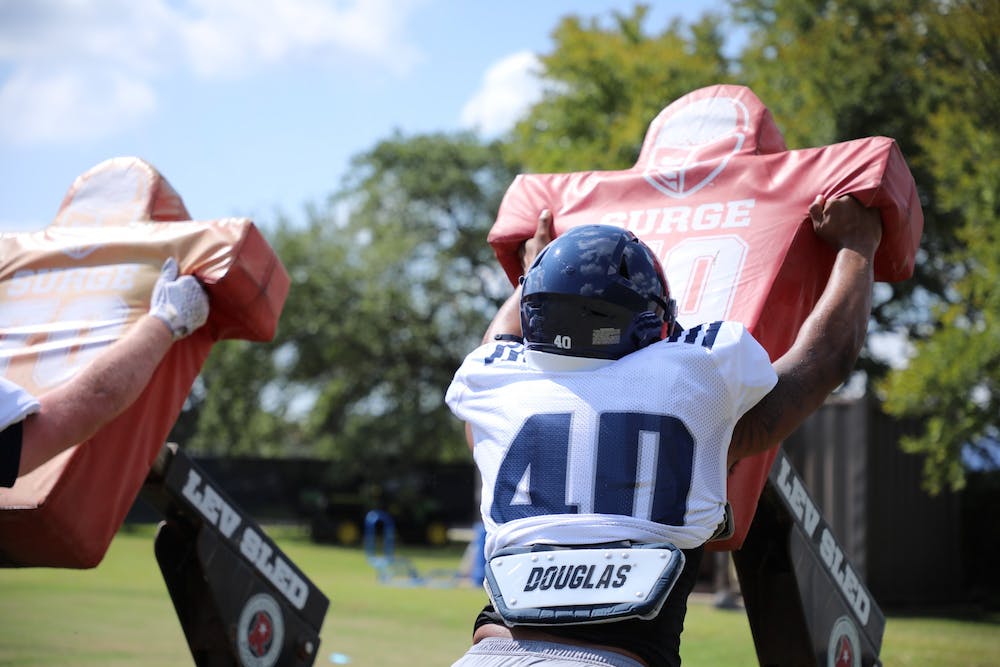 The Rice football team returned to practice on Thursday, after a month-long delay due to the COVID-19 pandemic. According to head coach Mike Bloomgren, after all of the obstacles going into the season, Thursday’s return to the field was triumphant for the team.

“The first practice we had, I [just] about kissed the ground,” Bloomgren said. “It was just so awesome to be back out there. Everything feels so new right now, so new and so exciting.”

Thursday’s practice marked the first full team practice since spring practices before the pandemic began. According to Bloomgren, this gave the practice an added significance.

“Every day one is filled with optimism,” Bloomgren said. “But for everything we all went through during the six months since spring ball ended, this one was really special.”

According to redshirt senior tight end Jordan Myers, the time away from practice has served as motivation for the team.

“It built a hunger over those few months,” Myers said. “We definitely [missed] it and we definitely won’t take it for granted again.”

For the next three weeks the team will hold its preseason training camp practices, usually held in August, before their season begins against Middle Tennessee State University on Oct. 24.

Their offseason has looked different than it would have in a normal year. In place of traditional practices, the team has conducted meetings over Zoom, strength and conditioning training, and walk-throughs. According to Bloomgren, despite the unusual offseason, the team is confident in where they stand going into the season.

“We’re at a good place,” Bloomgren said. “We’re as conditioned as we’ve ever been coming into camp. Our knowledge of our system is higher than it’s ever been on either side of the ball – and that includes the freshmen, because they’ve got about 100 Zoom hours. Now we just need [the] reps on the field.”

Still, Bloomgren admitted that the offseason has been difficult. For much of the summer, the fate of the college football season was in question. In August, both the Pac-12 and Big Ten conferences canceled their football seasons, before eventually reversing course in recent weeks.

According to Myers, the team was unsure if they’d ever be back on the practice field this year.

“It’s a blessing to be [practicing] again,” Myers said. “It felt like it was never going to happen.”

Bloomgren said that this uncertainty often proved difficult to navigate.

“There were points throughout the summer where I thought there was very little chance anyone would be playing football this fall,” Bloomgren said. “We couldn’t make schedules beyond tomorrow, in a lot of cases.”

However, Bloomgren said that he was impressed with how the players handled all of the challenges posed by this strange offseason.

“[The players] handled the uncertainty, maybe even better than I did,” Bloomgren said. “Our kids were resilient; I’m so grateful for the group.”

In order to handle these difficulties, Bloomgren said that he and his staff have preached three things to the team.

“There’s been three consistent things I’ve said to these guys during [the pandemic],” Bloomgren said. “Control the controllable is number one. Two, we need you to be more flexible than you’ve ever been. And the other thing we’ve said to them is this too shall pass.”

While uncertainty remains about the upcoming season, Thursday’s return to the practice field marked a milestone for a team that hasn’t held full practices in over six months. With practices resuming, the team will now turn its attention to getting ready for their season opener.