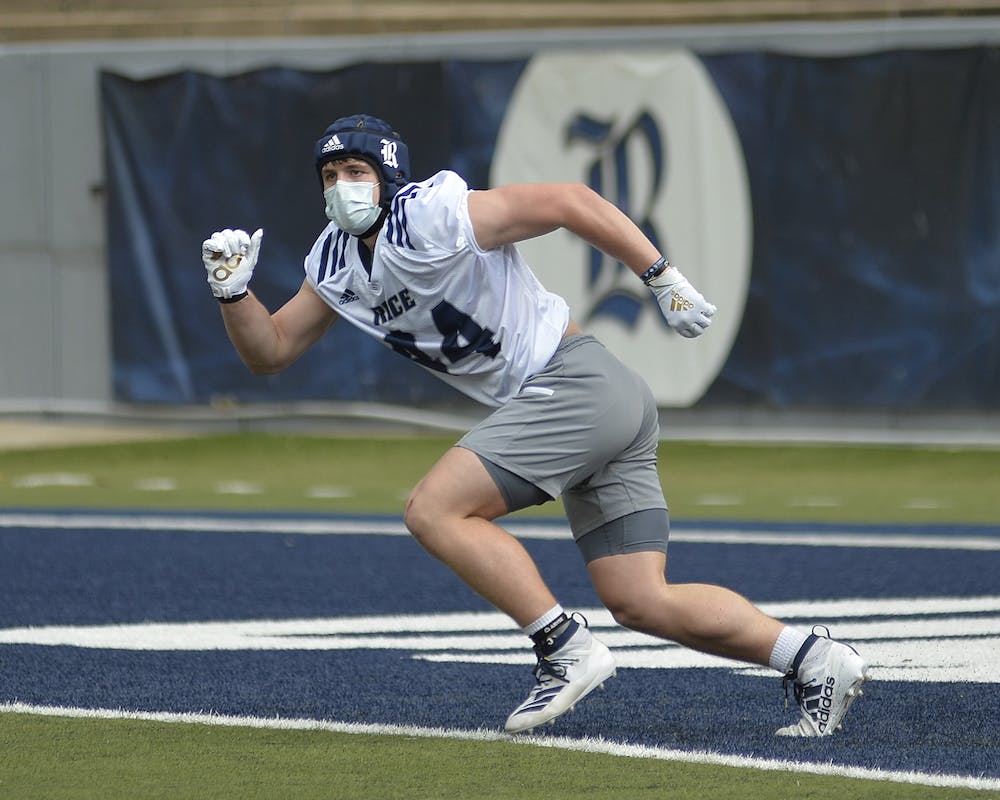 While practicing and getting ready for the season, the Rice football program has taken pandemic precautions including a shortened offseason and delaying contact practices.

According to head coach Mike Bloomgren, this shortened offseason means that the freshmen players did not get to go to the team training camp usually held in  August, but the players will still be able to participate in the same number of preseason practices as they would in a normal year.

Despite these precautions, multiple freshmen players have said that their class feels confident in their preparation for the upcoming season. Instead of contact practices in August, the team instead focused heavily on having meetings with the players so that they can understand the playbook and be accustomed to the schemes used in college.

According to freshman linebacker Geron Hargon, these changes could ultimately benefit the team’s freshmen.

“In past years [college freshmen] didn’t have as much time to learn the plays and digest the playbook because they would be diving immediately into practice,” Hargon said. “The biggest advantage for us as freshmen is more meeting time and more walkthrough time.”

Bloomgreen said that this additional meeting time has given the team’s freshmen a better chance to get acclimated with their teammates and protocols.

“They’ve had far more opportunities to grasp the system through meetings and walkthroughs than previous incoming freshmen,” Bloomgren said. “The constant meetings and exchange of game plans and schemes between the coaches and players should ease the often difficult transition between high school football to college football.”

Furthermore, the freshmen players used their time since signing for Rice last December to build camaraderie, especially with their fellow freshmen.

According to freshman center Braedon Nutter, their transition to college was further comforted and supplemented by being surrounded by such a strong community of football players at Rice, no matter if they were upperclassmen or freshmen. According to Nutter, this has helped them grow closer.

“Some of our coaches have told us that we are the tightest group ever,” Nutter said. “We made a group chat right after we all had committed and even though we didn’t know each other quite well then, we would always talk about what’s going on … [which] really helped us bond together.”

The team-building during the pandemic extended to forming strong relationships with teammates in specific position groups. According to Nutter, this has helped build unity among all of the offensive linemen.

“I think it actually brought our O-line together more since we had Zoom meetings since we signed in December,” Nutter said. “All of us have been hanging out and talking together. It’s unbelievable how we’re already friends with the upperclassmen [offensive linemen].”

Hargon said that the team credits their coaches, especially Bloomgren, with providing a very nurturing environment for them and with working hard to make sure that the players stay in the right mentality and avoid complaining.

“[Bloomgren] preaches … to not have a victim mentality because … it will bring you down as a team and it is contagious,” Hargon said.

According to both Nutter and Hargon, the positive mentality nurtured by the coaches on the team has really served as a beneficial mechanism for the freshmen players to get used to college football during this precarious time as they are also being supported by a large group of kind and friendly teammates.

“Right now that the locker room is one brotherhood, ” Nutter said.

With the strong support of both coaches and teammates, both Nutter and Hargon believe they have transitioned well into college football despite the numerous hurdles that they have faced.

“Going into the hotel with everything getting pushed back really helped everyone get close with each other because we were going through the exact same experiences,” Nutter said. “It really helped us bond together.”

Hargon agrees with Nutter and shares the same feelings of close friendship with his teammates.

“[The pandemic] has definitely brought all us closer together,” Hargon said. “I am ten times closer to these guys than I could think was possible. I am thankful for each and every one of them.”