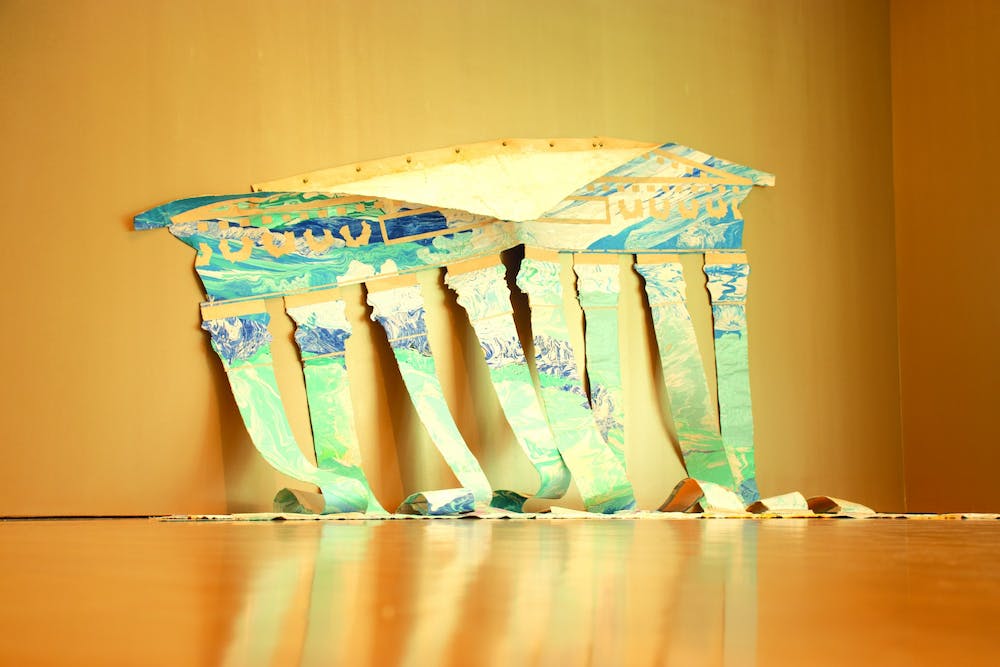 The main exhibition opens with the notable sight of a crumpling Supreme Court covered in homemade paint that resembles crashing waves, artwork produced by Rodney McMillian, an artist based in Los Angeles. The neoclassical exterior of the paint creates a sentiment of supposed perfection, but in through its collapsing state the artist also forces the viewer to come face-to-face with the flaws in our democracy.

In commanding viewers to think about the role that democracy plays in our lives, particularly with respect to elections, Aram Han Sifuentes creates an active space for viewers to engage in the voting process through his creation of a textile voting booth. Inside, viewers can find papers that mimic ballots that they are encouraged to fill out.

As viewers continue through the gallery, they will find the source of sound that can be heard upon first entering the space —  a large television stand that displays rock ‘n’ roll legend Aretha Franklin singing “God Bless America.” The immersive piece, designed by Paul Stephen Benjamin, uses Franklin’s powerful voice to symbolize new hope and life for democracy in the future despite its current flaws. “Including Aretha’s voice is... symbolic of the hope for the new president at the time and what change it could have brought,” said Barotto.

The exhibit space is divided into roughly three sections, and as visitors go through a set of doors to enter the next area, they are greeted by glittering black dresses designed by Teresa Margolles. However, upon closer inspection, Moody-goers will realize that the garments are embroidered with far more than simple sequins. Margolles has carefully stitched into the dress patterns the glass shards that were left by the bullets and violence in areas close to the border and in her mother country of Mexico. What is at first merely a superficial beauty now holds tremendous weight as the glass reflects lost lives.

Chris Burden’s work featuring three enormous Los Angeles Police Department uniforms emphasizes police brutality, leaving the viewer with a foreboding sentiment. The uniforms are so large that they loom over visitors and appear to engulf them, wreaking a sense of helplessness and despair.

With a similar theme of brutality, the work of Hank Willis Thomas encourages the contemplation of gun violence with  a giant black flag filled with white stars that pool onto the floor. Each star represents a gun-related death in the year 2016. Another piece invites visitors to confront gun violence quite literally with the creative work of video artist Lynn Hershman Leeson, “America’s Finest #2.” In this piece, Leeson repurposes an AK-47 assault rifle into a teaching moment when the viewer is given a chance to look through the eyehole and shoot at someone in a moving portrait. Each “shot” presents viewers with a different image of gun-related incidents until they finally arrive at their own reflection in the crosshairs. Leeson’s work goes a long way to remind us of the deaths that many have become desensitized to.

Camilo Godoy, a Colombian artist based in New York City, contributes a piece titled “Everybody knows they are guilty” which consists of five white sheets of paper embellished with  the signatures of the previous five U.S. presidents written in Godoy’s own blood. Godoy says he was inspired by a moment in his studio while studying photographs of President Franklin D. Roosevelt in the Oval Office signing the congressional declaration of war against Japan in 1941. By using his own blood, Godoy reminds spectators that every executive signature comes at the expense of human life. Godoy is not alone in his mission to expose the severe impacts of American political decisions on people, as his work is surrounded by many others that reveal the harsh and complicated realities of democracy.

At “States of Mind”, guests will find remnants of stories past and present, ideas involving surveillance, voting and civic duty, violence and xenophobia brazenly proclaimed at every moment, from every corner. While these pieces all communicate various  burdens and consequences  of America’s democracy, they also share a sense of hope for change and progress — and a hope that viewers are imparted with a new state of mind.