Alldredge is poised for a blazing senior year 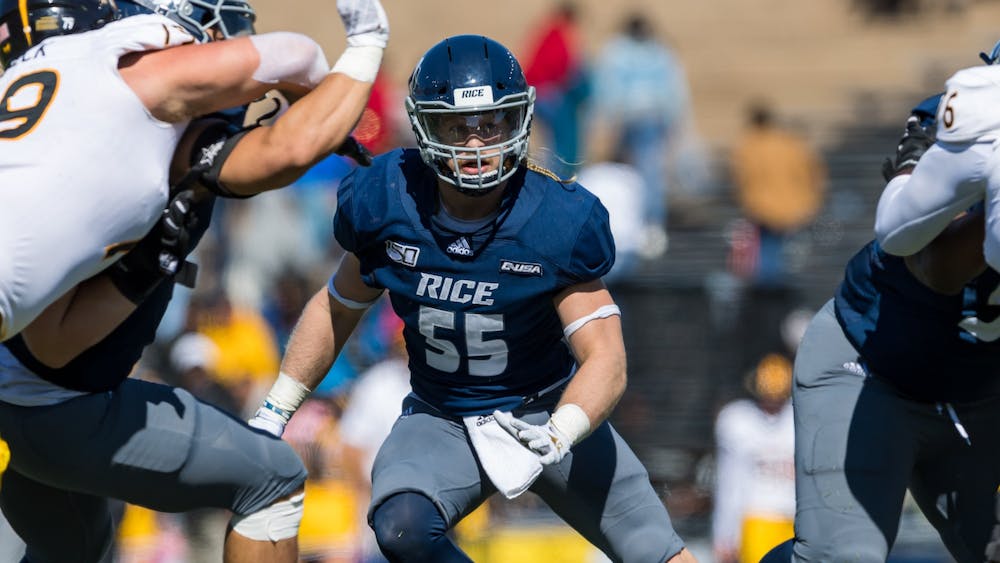 No matter where he is on the football field, Blaze Alldredge always stands out with the help of his long blond hair.

“When my parents finally let me grow out, I never looked back,” Alldredge said. “I don’t know who I would be without it.”

Iconic hair has long been a football mainstay, but Alldredge says that he is reluctant to compare his hair to famously long-locked former NFL stars Clay Matthews III and Troy Polamalu.

“I’m not as much about length and flow as they are. I would say that I do my own thing with it,” Alldredge said. “I do a lot more styling with mine, I’m big on the braids.”

Of course, it’s not just Alldredge’s hair that’s catching people’s attention. Over the course of the 2019 season, his 8.5 tackles per game, ranked fourth in the conference, and his 21.5 tackles for loss ranked second in the nation. He was named first team All-Conference USA, and Rice’s team MVP.

“I thought Blaze was the best defensive player in the conference last year,” head coach Mike Bloomgren said. “He's a great leader of our team and we're very thankful to have him.”

The rest of the college football world has begun to take notice as well. He has already been named to the preseason watchlists for the Nagurski and Benderick awards, both given to the best defensive player in college football, as well as the Butkus Award for the nation’s top linebacker.

While he is finally getting his fair share of recognition now, that wasn’t always the case. Alldredge was lightly recruited out of high school before spending a year playing at Pierce College, a junior college in Los Angeles. Alldredge said that year gave him a chance to hone his game before playing in Division I.

“Having the year to go [junior college], I no doubt transformed who I was as a player,” Alldredge said. “But I would say that I didn’t make myself a Division I football player at [junior college].”

After his first year, he received offers from the University of Connecticut and Eastern Michigan University, but ultimately chose to go to Rice.

When he first arrived on campus, Alldredge says that he was met with even more doubts from others.

“Where I really gained the biggest chip on my shoulder was actually here at Rice, working my way up the depth chart, and just proving to myself and to my coaches the caliber of player that I was.”

However, he quickly solidified his role on the team, securing a starting spot midway through the season. Alldredge says that he credits his on field success to his mentality and work ethic.

“The truth is, I don’t think too highly of my capabilities,” he said. “But I do think highly of my resolve. I just want it more.”

Now, as he enters his senior season, Alldredge has already established himself as a leader of the defense, and one of the premier players in the conference. Despite this, Alldredge says that he is still always trying to improve.

“One of my biggest strengths is that I keep improving and that I just keep taking coaching,” Alldredge said. “I never think that my game is a finished product.”

Alldredge’s will to improve was put to the test by the changes implemented due to the COVID-19 pandemic. He and the rest of the team had to prepare for the season, despite losing valuable practice time during the spring and the summer, and not being able to practice as an entire team.

But despite the setbacks, Alldredge says that he and the team are not making any excuses for the upcoming season. While the NCAA recently granted an extra year of eligibility to all fall athletes, Alldredge, a senior, spent the offseason preparing for this season as if it's his last.

“I’m trying to be more vocal and do what I can for my teammates,” Alldredge said. “It’s my last year and I don’t want to have any regrets.”

If this is his last year with the Owls, an NFL career could be in the cards for Alldredge. DraftScout.com, a website dedicated to scouting NFL prospects, currently has him projected to be selected in the sixth round of next year’s NFL draft. Alldredge acknowledges how special that would be, but he says that his focus remains on the upcoming season.

“From the time I was three years old, I was telling adults that I wanted to be an NFL player when I grew up,” he said. “My main focus is on doing everything I can for Rice this season. But the truth of the matter is that by doing that, that’s going to help me take care of getting to the next level.”

Still, Alldredge knows that football careers don’t last forever. He says that he plans to attend law school once his playing career is over.

“I had people my whole life tell me to be realistic,” he said.“I’ve always taken the plan of action as if I would go to law school. After I give my NFL career a try, I want to go to law school and get my law degree.”

Alldredge, who was named to the C-USA all-academic team as well, credits his family for his drive to succeed both on and off the field. In particular, he says that his older brother pushed him to excel in the classroom.

“My family is everything to me. My older brother in particular, I’m super close with. He really raised me,” Alldredge said.

Alldredge remembered a specific instance when his brother was particularly disappointed.

“My freshman year of high school I got a (B-plus) in my history class,” he said. “[My brother] had me convinced I wasn’t going to get into any college, period.”

Alldredge also thanks his family for his unique name, which he speculates “boosts [his] overall [player rating] by maybe 3.”

While Alldredge knows that the NFL may come calling after this season, he hopes his time at Rice will resonate for years to come.

“I want to be remembered at Rice,” Alldredge said. “I want to be a part of something. That’s going to come [from] us first having a winning season this year. But where it really happens is [from] passing on my knowledge to the young linebackers, and them doing it to the next, so that Rice becomes a long-term powerhouse.” 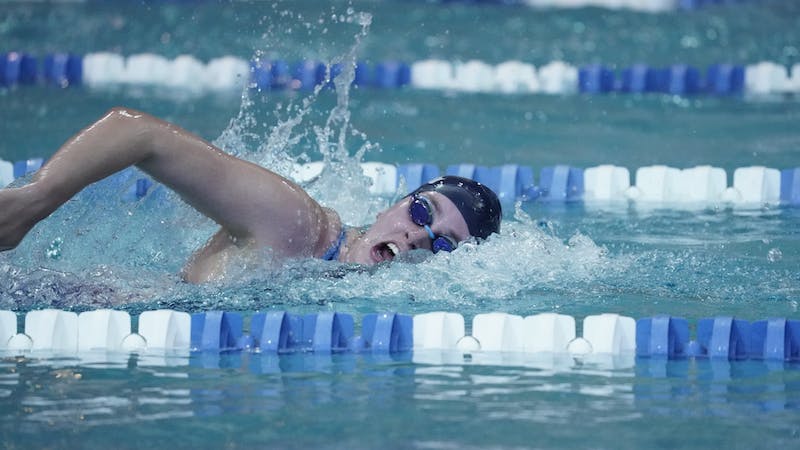 Owls Swim their Way to Second Place at C-USA Championships

Rice swimming finished No. 2 at the Conference USA Women’s Swimming Championships, placing behind Florida International University. The team amassed 905.5 points, which ranked as the program’s highest point total in the past seven years. Several members of the team won individual accolades for their performance at the C-USA Championships, with senior Ellery Parish, sophomore Madison Howe, senior Lindsay Mathys and freshman Imogen Meers all being named as members of the First Team All-Conference. 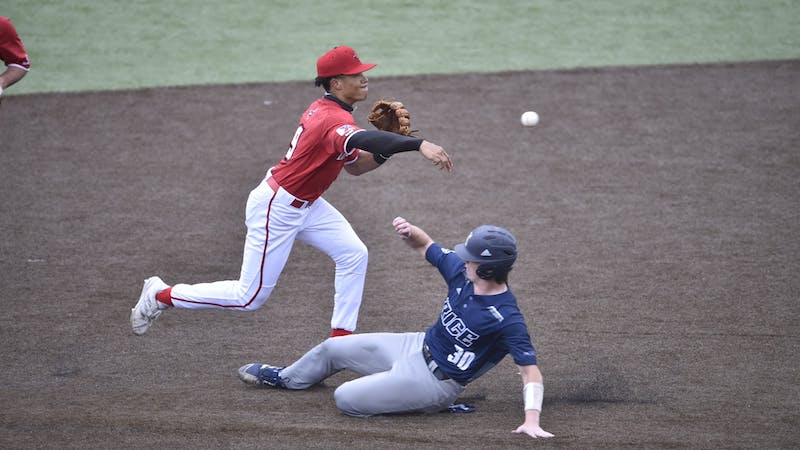 Rice baseball lost all three games played against the University of Louisiana this past weekend. After opening the season 2-1 in their series against Houston Baptist University, the Owls traveled to Lafayette, where they were promptly swept by the Rajun’ Cajuns. The Owls fell 7-3 in the Friday night game, and followed that up with 5-3 and 6-3 losses over the weekend,  dropping their overall record to 2-4. Head coach Matt Bragga took a somber tone in describing the weekend, pointing to the lack of offensive production as a big reason for his team’s struggles. 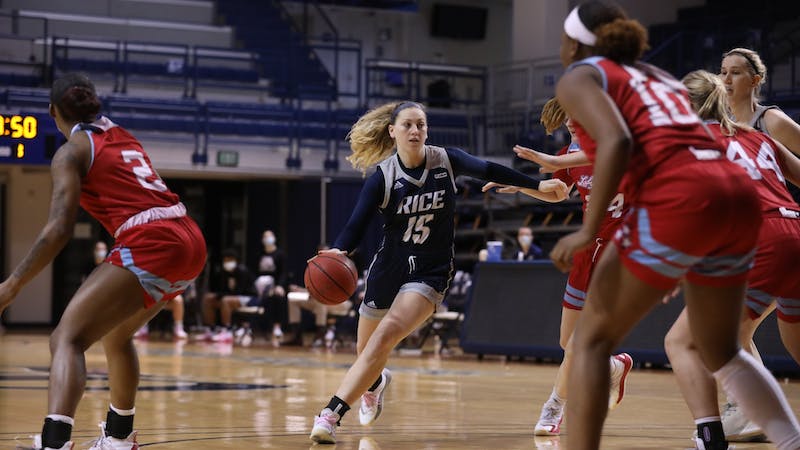 Rice Women’s Basketball improved their record to 15-2 with back-to-back victories against Louisiana Tech University this weekend. The Owls outscored the Lady Techsters by a combined 34 points as they earned their tenth and eleventh conference wins of the season. Head coach Tina Langley said she is proud of her team’s performance, especially given their stop-and-start season due to the pandemic.