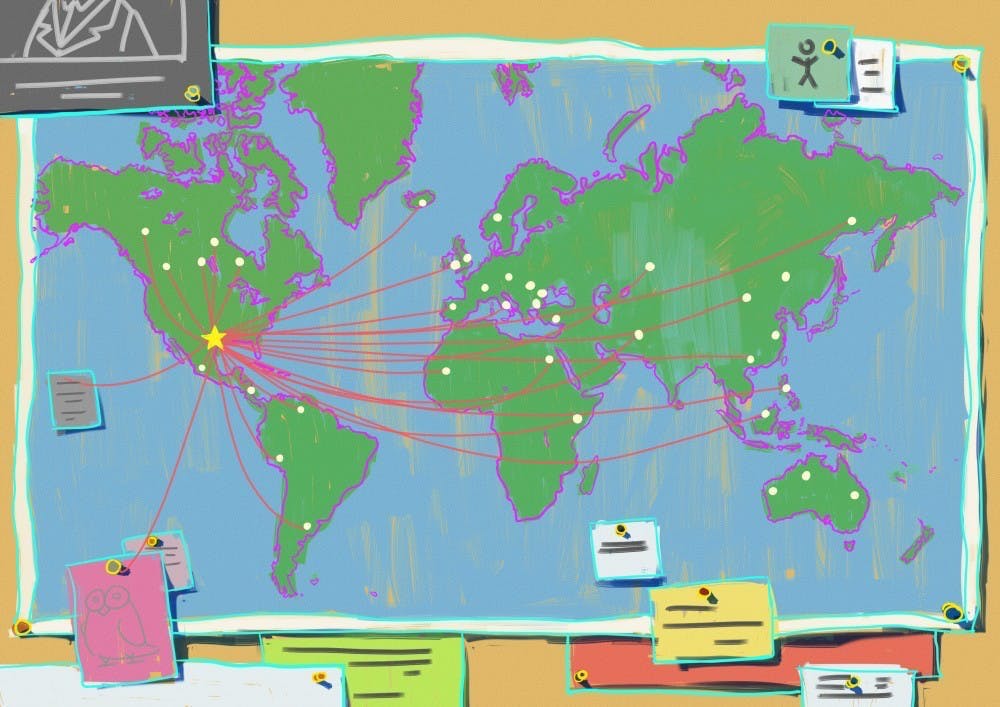 U.S. Immigration and Customs Enforcement updated regulations for students on nonimmigrant F-1 and M-1 visas on July 5. According to President David Leebron, Rice plans to participate in legal action to overturn these new regulations by supporting the action filed by Harvard and MIT through an amicus brief.

Based on the announcement from ICE, international students are not allowed to remain in the U.S. if their college or university decides to switch to online learning at any point during the fall semester. If students are currently in their home countries and unable to return to the U.S. due to travel restrictions or health concerns, they risk losing their visas.

Leebron and Provost Reginald DesRoches sent an email to international students on July 8, expressing their support for the international student community. On July 9, an email from Adria Baker, the associate vice provost for international education and executive director of the Office of International Students & Scholars, stated that “Rice is committed to the dual delivery mode, in order to do our best to accommodate all of the Rice students.”

Diae El Jardi, a student from Casablanca, Morocco, is currently staying at a friend’s house in the United States. She said that her parents didn’t want her to take the risk of travelling home in March, because of health concerns over coronavirus, as well as the time difference with classes.

“Now my main concern is trying not to get kicked out of America, and not being able to go back home, because the borders in Morocco are closed,” El Jardi, a Hanszen College junior, said. “I really hope it won’t happen, but if Rice goes fully online, I don't know what I’m going to do.”

Susu Yan, who is currently back at home in Shanghai, said that losing the visa might affect her plans for the spring semester as well.

“There are huge lines waiting for the visa centers to open … many new students are in priority lines because they have to get their visas in order to enter the states for their first year,” Yan, a Duncan College junior, said. “We’re pushed further behind, and if we can’t get our renewed visa on time for spring term, then we couldn't take the spring term as well.”

Sofia Aguilera, a sophomore at Duncan, said that she travelled home to Mexico City after Rice transitioned to online classes in the spring. While she was originally planning to return to Houston for the fall, news of Houston being a hotspot for the coronavirus has made her change her plans. Since Rice is holding classes in a hybrid mode, Aguilera said that she is going to lose her visa.

“The most likely is that I won't return, but that's going to be a pain because since Rice is still hybrid, I’m going to lose my visa even though I [will] still take the classes,” Aguilera said. “But what worries me is that I don't know how things will be in December if Mexico is going to shut down again. The problem is I don't know if I will be able to get a new visa. Hopefully I will, but for now all the embassies are closed and they haven’t opened.”

On July 9, all international students received a survey link titled “Fall 2020 Survey / "What if" scenario tool” from Baker, where students were prompted to enter information about their plans for the fall. While the survey was not intended to be binding for immigration records, it displayed specific requirements and considerations for students based on the information entered.

International students from China received a separate survey link from Baker on July 8. Vania Ding, a Duncan sophomore from Jiangsu Province, China, said that the survey asked students whether they plan to be in the U.S. or China for fall 2020. If they responded saying that they would be in China, students were then asked to indicate whether or not they would be interested in a “go-local” program.

“The next question was, ‘do you want to reside on campus or stay at home’,” Ding said. “Seeing that was very comforting and we are so happy about it, because we’re seeing that Rice is seriously considering and making every effort it can to make this program work.”

If students are unable to travel to the United States, Leebron said that Rice is exploring the possibility of establishing a program with institutions in students’ home countries, in areas with higher concentrations of international students. According to Leebron, this approach might allow students to “combine an online program with some local study and interaction.” For students in countries with fewer international students, Leebron said that Rice would be responsive if students reached out with ways to set up their own programs and apply to transfer credits.

Ding said that she’s concerned about losing her F-1 visa because the process to get a new visa might be difficult –– applications sometimes get rejected, and students might have to wait for longer than they anticipate.

Elina Chen, a junior at Hanszen, said that international students already face a lot of difficulties when it comes to internships. They must apply for authorization to work off campus through the curricular practical training and optional practical training programs.

“International students can only apply to jobs related to their majors and there is a limited time they can do their internship in the U.S., through [curricular practical training],” Chen said. “For architectural students, the fifth-year preceptorship program takes nine to twelve months, meaning that we can only intern for zero to three months in the US for the rest of our time while we [pursue] the degree.”

Students on F-1 visas usually have to wait for a year before they can apply for authorization to work off campus, according to the Department of Homeland Security. Yan said that losing her visa now might have an impact on her eligibility for work experience authorization, which is particularly problematic for juniors and seniors who have not yet gained any work experience in the United States.

Julia Huang, the president of Rice International Student Association, said that while the university’s first priority is not always to update students, it would be easier if RISA had some sort of explanation as to what Rice is working on, so they would have something to tell international students which would help with anxiety.

“RISA, going forward, we just want to be in open and constant communication with the university, to really share the concerns that the international student community has, because oftentimes it’s not necessarily clear what the most pressing issue is,” Huang, a Martel College senior, said.

In the July 8 email to international students, Leebron explained Rice’s approach to the situation.

“We are committed to establishing a path for our international students who are already in the country, or who are able to arrive in Houston, to stay in visa compliance and have a great experience at Rice,” Leebron wrote. “For our students who are unable to travel to Houston, we will take a flexible approach to enable them to continue their studies, and when possible join us in Houston.”

Leebron said that while the likelihood of having to change plans mid-semester cannot be predicted, decisions will be made keeping the health and safety of members of the Rice community in mind, and that these new regulations will also be factored in.

“If this kind of rule remains enforced, it really means that we must offer something in person for our international students in the United States, or they will lose their visa status,” Leebron said. “And if rules aren’t overturned, and I'm optimistic they will be, that means they must take a course or other component of their education on campus.”

Aguilera said there are some flights from Mexico to the United States, but she and her parents are concerned about what might happen if she gets the coronavirus.

“I can go back to the U.S. because I'm a student but [my parents] wouldn't be able to go to the U.S.,” Aguilera said. “So if I get sick, I'll be all alone in the U.S., in Houston, without my parents or any family or anyone.”

According to Aguilera, it is a “lose-lose situation” no matter what she chooses to do.

“I think it’s just the fact that i think all of us internationals feel so helpless and frustrated with the situation,” Aguilera said. “Even though Rice is telling us, oh yeah, we’ll do everything in our power to help you, I think it’s very much out of their control, so that’s what frustrates me a lot.”

Yan said that she appreciated how Rice kept the campus open in the spring for international students who could not travel to their home countries.

“We’d really like that our school would continue to support us, because we certainly understand that the government doesn't really welcome us back to the States, but we’d like our school to at least fight for us,” Yan said.

“I am constantly reading, constantly updating myself on all this visa stuff,” Huang said. “I think I truly appreciate international students and what they have to go through and I think a lot of people take that for granted. It’s a lot of work, and it’s so confusing.”

The Rice Chinese Student Association will host its annual Lunar New Year Gala in person for the first time since 2020 this Saturday, Jan. 28. The Gala, hosted jointly by the RCSA and the Vietnamese Student Association, will feature traditional dances, music, creative writing, food and fashion, according to the RCSA Instagram.