Heroes on the front lines: Rice alumni fight against COVID-19 in hospitals 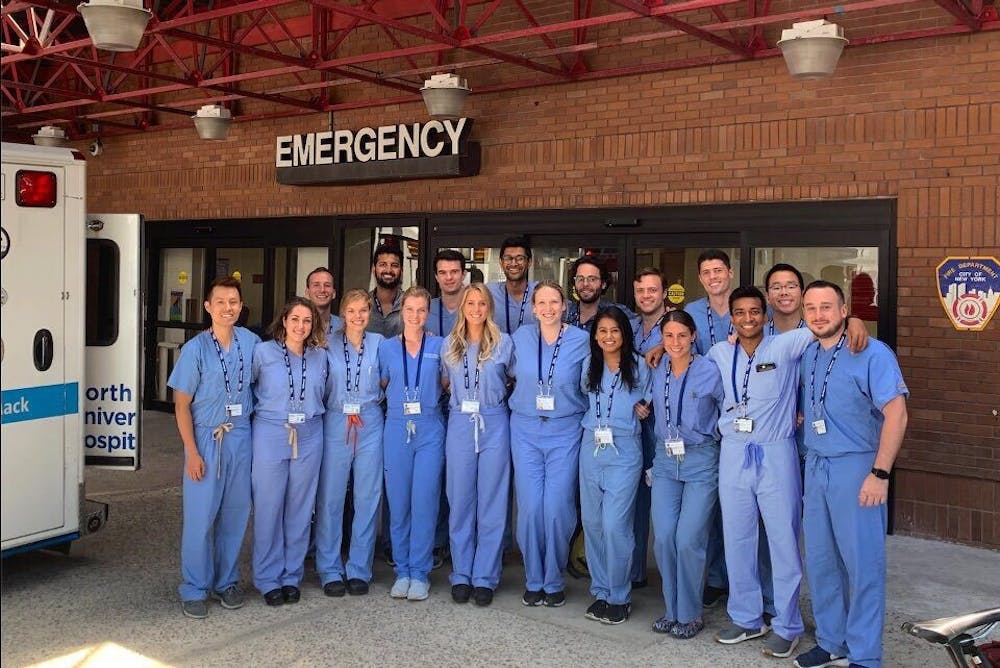 Daniel Imas (Lovett College ‘15) and his coworkers at the New York University Langone Medical Center and Bellevue Hospital in New York City. New York has become one of the epicenters for the novel coronavirus. Courtesy Daniel Imas.

Rice students aspiring to become doctors do plenty of preparation in their undergraduate years  — prerequisite courses, Medical College Admission Tests and clinical experiences. But most students are likely not preparing to be on the front lines of the battle against a global pandemic. However, that’s exactly where a number of Rice alumni have found themselves in the face of COVID-19.

Daniel Imas (Lovett College ’15) is an emergency medicine resident at the New York University Langone Medical Center and Bellevue Hospital in New York City —  now the world epicenter of the COVID-19 outbreak. The situation in New York City and New York state remains the most severe in the country.

“We’ve become the center of the outbreak in the country, which has obviously been pretty difficult, especially in a city where we’re so densely populated,” Imas said.

Imas had been working with COVID-19 patients in the emergency room for a few weeks but was moved to the surgical intensive care unit in early April, which is one of a few non-COVID-19 units left in the hospital.

“In the emergency department, in the first few weeks of this outbreak, we were seeing a lot of ‘worried well’ — patients who had minimal or no symptoms but believed they had exposure to COVID-positive individuals,” Imas said. “This caused a flurry of people into the ER.”

Although many of the people who rushed to the ER turned out to not have the virus, many did — and needed help immediately.

“We also had many sick patients who came in with shortness of breath who required oxygen or a breathing tube, so it’s been a hospital wide challenge figuring out how best to care for these patients without exposing those involved in their care,” Imas said.

Felipe Serrano (Jones College ’08) works as an emergency medicine physician in New York City. He said the number of new patients has finally started to decrease slightly, after climbing for weeks.

Because of the overwhelming number of patients, hospitals have had to make more space to take care of the patients by repurposing the other available rooms, according to Imas and Serrano.

“Our hospitals are quickly filling up and just about every hospital in the city is constantly working on figuring out how to make space for more patients,” Imas said. “The hospitals are always looking for what unit they can turn into the next ICU or what part of the hospital they can repurpose as a ward to support all our patients.”

The shortage of space is also creating difficulties for medical staff because they have to decide how to use the limited space more effectively.

In addition to a lack of space, a lack of medical resources for both patients and medical staff is another issue that has to be addressed. Fortunately, according to Imas, the situation is getting better with donations and changing hospital policies.

“We’ve been using [personal protective equipment] longer than we normally would [pre-COVID-19], such as reusing our N95 masks. A lot of the U.S. sources have sold out of masks, which has made getting them an issue,” Imas said. “But I’d say the situation has improved over the last week as a result of both donations, sterilization measures at some hospitals and securing more places to buy masks from.”

Serrano said his hospital has enough masks and other protective equipment for nurses, physicians and medical providers, but he still worries about future depletion. Serrano went on “Richard French Live,” a political talk show based in New York, to discuss the matter.

“The concern is even though we might have enough now, if this continues, we are going to eventually run out and the rest of the country won’t have enough,” Serrano said on the show.

On the show, Serrano described how a dearth of ventilators and other medical equipment is also posing problems for hospitals as they have to make tough decisions about who can use them.

The situation in Texas is less severe than that in New York, with hospitals seeing fewer patients and more supplies, but healthcare providers are also struggling. Erin Wittman Lincoln (Brown College ’05), an emergency medicine resident in Austin, said her hospital is also conserving masks.

“For the most part, we are getting proper protections, but we are not wearing masks 100 percent of the time because we have to conserve them,” Lincoln said. “Fortunately, Austin now does not have many patients, so the space is currently enough, but we are not sure about the future.”

Gabriela Barrios (Hanszen ’18) is currently working as an emergency medical technician for an ambulance service in Houston.

“We get called out to a lot of people who could be [COVID-19] patients but haven’t been tested. Our dispatchers ask them questions and let us know whether we should consider putting on full [personal protective equipment],” Barrios said. “We are fortunate to have sets of full [personal protective equipment], and we are wearing N95 masks for every patient contact. However, we have to reuse masks if we haven’t come into contact with a suspected [COVID-19] patient.”

In addition to the shortness of physical resources on the front lines, mental health is another big issue for medical staff. Working in a high-risk environment, Lincoln said all healthcare workers fear that they may transfer the virus to their families, friends and their loved ones.

“I became very cautious about eating. I pay a lot of attention to making sure everything is clean before eating,” Lincoln said. “Every time I went back home, I went to the bathroom for a shower immediately. Now my husband and I take showers in different bathrooms and sleep in different bedrooms every day.”

According to Serrano, that fear for loved ones is common among healthcare workers across the country.

“A lot of doctors who have symptoms are trying to isolate themselves from their families. We are very nervous about getting our families sick,” Serrano said. “I know some of my colleagues have sent their kids away to their grandparents so that they don’t get them sick; some people are living in different apartments from their partners.”

Beyond the concerns of transferring the virus to their families, many medical providers are also suffering from the stress of confronting so much sickness and death every day.

“Reality hit me hard as I saw sick patients fighting for their lives behind closed glass doors and hospital staff rushing to take temperatures on anyone who entered the building,” Barrios told Rice Magazine. “Instead of being able to talk with them and touch them, we were now speaking to them behind N95 masks and tossing them thermometers from at least 6 feet away. Many of them were unhappy; they felt like they were being treated impersonally.”

Serrano said that because of the isolation policy, families are not allowed to get into the hospital to see their loved ones, and  often healthcare workers like him are the last person that a patient sees in their life.

“They have no family members there because of our policy of no visitors, so these patients are the most isolated,” Serrano said. “The human aspect in the emergency department has been what has hit me the most. Holding a patient’s hand and explaining to them they’re gonna get intubated, and letting them call their family member for a couple of minutes before we do it just so that they can hear their voice, maybe for one last time, that’s what really tugs your heartstrings when you’re working there every day.”