Review: Dua Lipa’s ‘Future Nostalgia’ revitalizes disco and dance when we need it most 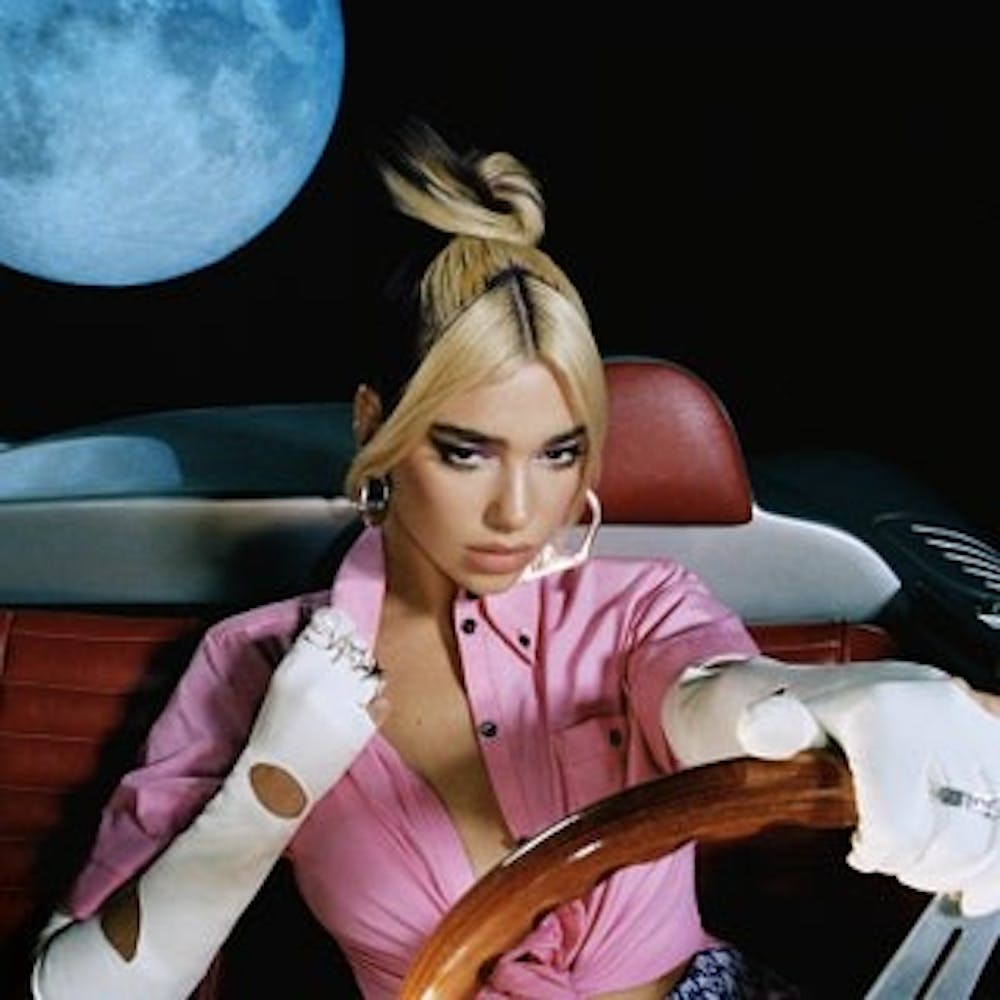 The only thing that could pull me out of my quarantine-induced depression and resulting creative rot was the possibility of reviewing the new Dua Lipa album, “Future Nostalgia.” The much-anticipated album (at least within the niche queer communities I reside in) arrived on March 27, a week before its intended release date due to a much-circulated leak that had Dua crying on Instagram Live. Taking it like the absolute queen she is, Dua steeled herself and dropped this absolutely nuclear classic of a 21st century disco album.

The entire era for Future Nostalgia ran a masterclass on how to generate hype and, more importantly, good music. “Don’t Start Now,” a Mark Ronson-esque, sassy romp driven by the most memorable pop bassline in recent memory dominated my dance playlists before taking over the radio in late 2019. The follow-up single “Physical” featured two beautifully choreographed videos, an entire clothes line, and a synth flute line that has been mashed up with Britney Spears, Lil Nas X and, of course, the first pop super superstar to scream “Let’s get physical,” Olivia Newton John. The final single, “Break My Heart,” released just two days before the entire album, had me dancing around the kitchen after charging into the second part of the chorus. After three no-miss singles, I was beyond ready for Ms. Dula Peep’s magnum opus.

Like with all art, we must first judge the book by its cover. By that, I don’t mean evaluating the actual album cover, which is just Dua looking fierce driving a car through space. No, I mean evaluating the album title, so iconic that someone Snapchat messaged me in all caps about it. Though Dua insists that the album name derived from a simple amalgamation of her desire for modernity and disco, I’d like to think of it as a Lacanian commentary on the human desire to create nostalgia. We orient ourselves, even in the present, towards how we will understand that moment as past in the future. Listening to music is sometimes thought of not in the sense of momentary enjoyment, but instead as how we will look back on the moment fondly. By using “Future Nostalgia,” Dua Lipa exposes the contradictions within this system and asks us — no, begs us — to enjoy screaming the hook of “Levitating.” Queen of stopping ontological violence!

In terms of the actual music, obviously secondary to semiotic philosophical implications, Dua Lipa is batting 1.000. Every song has its own poetic moments and gems that arch into a larger narrative: a party where everyone is invited. It’s been a very long time since I’ve heard a record that makes me want to dance this much — so many danceable artists have become moodier (Kim Petras), artsier (Porter Robinson), or worse (Jason Derulo, come back, I miss you) to the point to where there’s a clear void in dance music for everyone. Right now, half the kids want to jump around to Illenium, the other half want to listen to Katy Perry songs that came out a decade ago and a weird corner is just listening to 100 Gecs. Dua Lipa has united the ravers, the nostalgics and the critics into an album that satisfies literally everything you could ever want to party to. The true tragedy of Dua Lipa’s gambit lies in the fact that this album was released during the quarantine, when my fellow Dua fans and I can’t absolutely lose our minds to funky basslines being blasted over the speakers at Blur.

I’ve been putting off talking about individual songs because I could honestly type an entire paragraph about each, including the mediocre (by comparison) closing track “Boys Will Be Boys.” Instead of making this review even more exorbitantly long, I’ll hit the non-single highlights. “Cool,” the third track and the listener’s first taste of new music on the album, starts with bouncy ’80s-inspired arps before Dua’s voice and sublime, reverb-heavy backing vocals cut through the sparse instrumentation. After a synth drum fill, the chorus explodes with a gated-reverb drum and riffy bass to the memorable hook “I guess I’m losing all my cool” before a post-chorus repeating “I’m ready for the summer.” If the summer can let me blast this song in a car with my friends without worrying about Canvas notifications, I can’t wait for it either, Dua.

The three song run of “Levitating,” “Pretty Please” and “Hallucinate,” is transcendent. Fittingly, I feel like I am levitating out of my body when Dua’s staccato delivery turns into syncopated guitar turned into disco stabs and vocoders for a magnificent chorus. With all the backing vocals, it already sounds as if it was sung for our party at the end of the world. “Pretty Please” boasts another groovy bass-driven verse, but doesn’t explode like many of its peers, and instead turns into a sultry, silky, sickly-sweet chorus where Dua Lipa sings “Pretty please / put your hands on me / sweet relief.” This does not help any of us whose lives are devoid of romantic contact due to quarantine, but Ms. Lipa had no way to foresee that, and so I forgive her for inducing longing. Finally, “Hallucinate.” I don’t even know what to write about this song without an exuberant string of hyperbole and expletives. The Rhodes chords backing the verse? The filtered, grainy drums behind the falsetto in the pre-chorus? The chorus? The scrumptious, bopping chorus featuring a funky high bassline over a four-to-the-floor pounding? God, it’s perfect. I could end my review here and instead provide my friend’s tweets on the iconic tracks of “Future Nostalgia.”

Noooo. Hallucinate did things to my soul. That song could revive pop alone

But I won’t end the review there because I love the sound of my own voice. Don’t worry, though, this is the conclusion. Dua Lipa has delivered one of the 21st century’s best pop albums, on par with master clinics like “1989” and “Emotion,” by combining the bygone days of disco and modern sensibilities to create a shockingly fresh sound. “Future Nostalgia,” philosophically or not, says enjoy the present as much as you can but don’t forget about the album after quarantine, because it will slap at a party.