Sign of the Times: ASTR* Mag editors adapt ahead of new issue ‘Yesterday’ 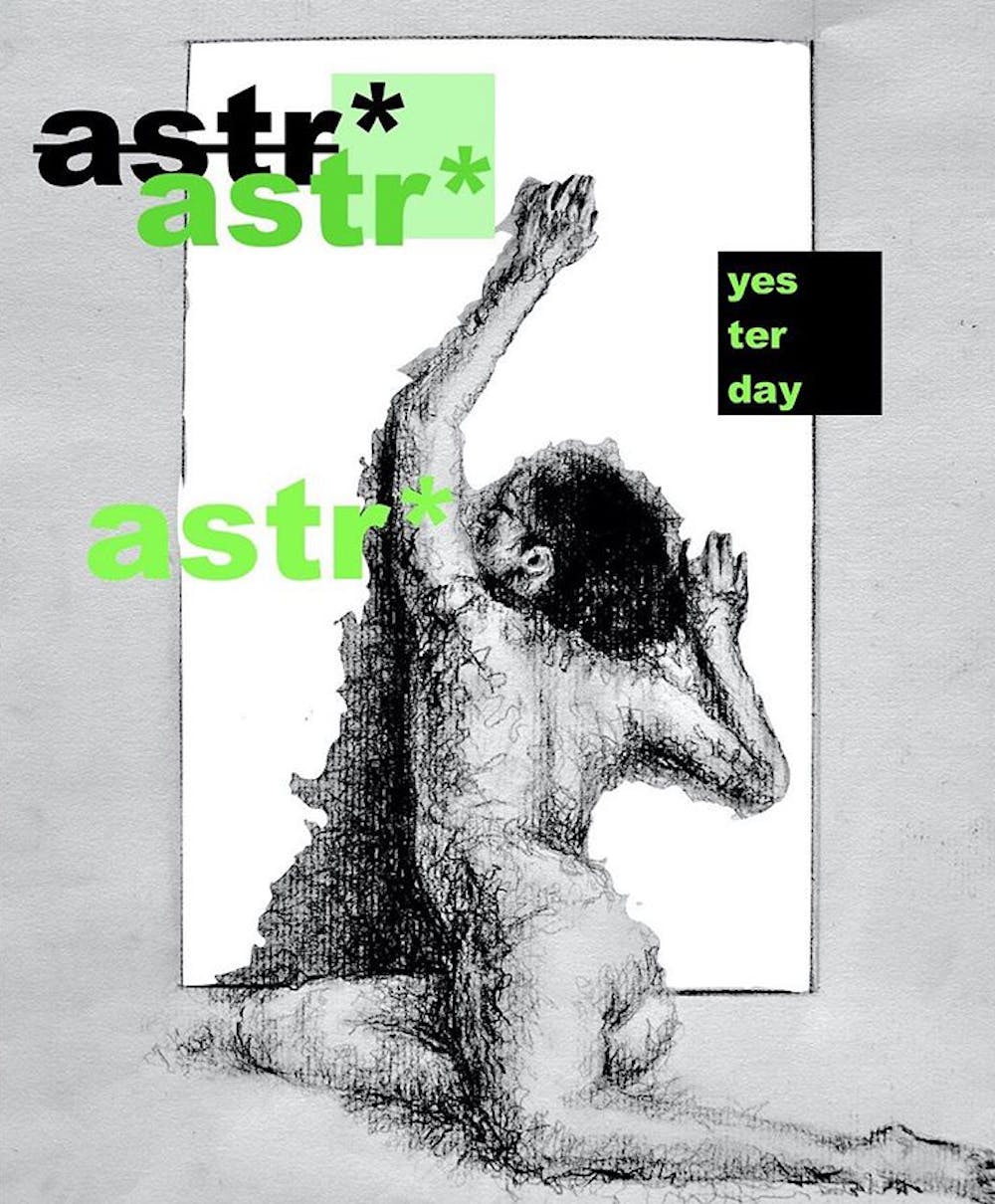 Rice’s budding student-run arts magazine ASTR* will release its second issue online as a result of the campus shutdown. Its editors talk about thriving on chaos and collaboration, and how the current situation has influenced the production of their magazine.

According to Editor-in-Chief Gabriella Feuillet, the second issue, titled “Yesterday,” will be displayed online and potentially followed by a print version in the next academic year.

“We don’t know if it’s going to be something more structured like [a PDF] where it’s meant to be read linearly, or if it’s going to be all of our content in different forms spread throughout a website,” Feuillet, a Sid Richardson College junior, said.

With an increase in submissions using music and video mediums, Feuillet said that a website format expands their ability to display a wider range of multimedia than would typically be possible in print.

“I think it will be a really nice playscape of links and different visuals,” Feuillet said.

ASTR editor Ella Feldman emphasized that people have been turning to art in the current moment of crisis.

“I am definitely excited to see what releasing the art of so many Rice students in this space when we're not together will do for people, and how people will react to that, because I think that the relationship that people have to art right now is in some ways different than it's ever been before,” Feldman, a Baker College junior, said.

Isabel Samperio, another editor at ASTR, agreed that social isolation has resulted in a virtual explosion of creativity as many publications move to completely online formats.

“I think it's really interesting to see what we can do that we maybe couldn't do with print before, but also have that in conversation with a future print publication,” Samperio, a Hanszen College junior, said.

The current moment of uncertainty has changed the way that ASTR*’s editors relate to the theme of its second issue, “Yesterday,” especially as many of them work on producing the magazine from their childhood homes. Samperio originally suggested the theme as a contrast to that of the first issue, “Body.”

“‘Body’ felt like a very tangible and material thing, like we can see and feel bodies, and so I thought it would be interesting to move away into something more abstract and nebulous,” Samperio said.

Feuillet said that the theme seems particularly fitting for the situation because looking back to the past feels more rational than thinking about a future filled with uncertainty.

“Right now it’s almost a form of solace, and it feels very concrete versus the questions that we have about everything,” Feuillet said.

Being unable to meet on campus has also affected the team’s collaborative process. According to Samperio, something unique about ASTR* is that all the editors participate collaboratively in designing the spreads rather than relegating one member as the sole designer, allowing all of them to express their personal visual aesthetic and creative goals.

Though this high level of individuality is familiar and encouraged among the magazine’s editorial team, Pilar Canavosio, another ASTR editor, emphasized the importance of physically working together to create the magazine.

“The first year, we made a lot of our spreads together in the D[igital] M[edia] C[ommons], so a lot of it was looking at what another person’s spread was like and being inspired by that but then putting your own spin on it,” Canavosio, a Hanszen College junior, said.

The loss of access to digital tools available on Rice’s campus such as the Adobe Creative Suite has also posed difficulties to Canavosio.

“For those of us that don't have the same tools that we did at Rice, it's forced us to be really creative about how we're going to go about making our spreads,” she said.

The editors compensate for the absence of this physical collaboration by sending each other inspiration online. Social isolation has contributed to their individual creative processes both positively and negatively.

Laura Yordan, another member of the editorial team, said that ASTR* provides a creative outlet for her in a stressful time.

“It's been interesting trying to get creative with what we have, and I think that channeling this energy into creativity has been cathartic, at least for me,” Yordan, a Lovett College junior, said.

According to Feldman, something special about ASTR* is that the editors allow the magazine and their creative processes to be chaotic.

“Often we aren’t as, I guess, traditional or cohesive as other publications need to be,” Feldman said. “We’re always in conversation about how we can change the shape of the magazine, and how we want to make our web presence look, and it’s a constantly evolving thing that isn’t influenced by any rules.”

Harish Krishnamoorthy, another editor at the magazine, emphasized the value of embracing this personal and relaxed form of collaboration during a stressful time.

“It's a break from things that feel like work, and this feels more like a really relaxed way to react to pieces of art, and that's nice emotionally for me,” Krishnamoorthy, a Hanszen College junior, said. “And it's also nice that we've embraced whatever lo-fi techniques we might have.”

Keep an eye out for the release of ASTR*’s second issue “Yesterday” in the coming months on their Issuu page and by following @astr.mag on Instagram.