Santiago, age 9, ‘signs on’ to Rice’s Track and Field team 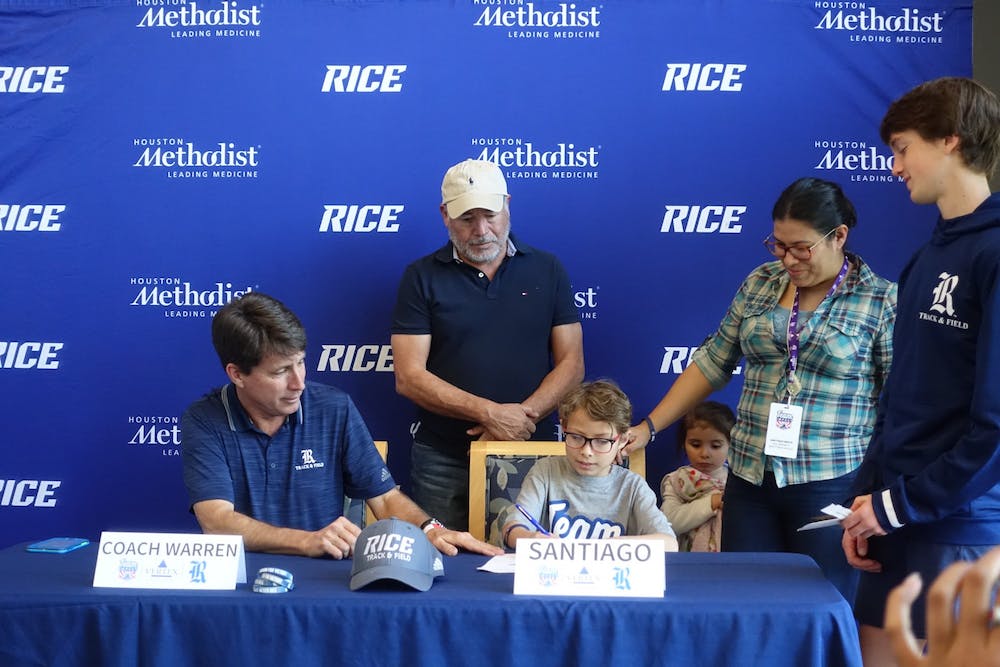 On Saturday, Rice Athletics announced the signing of a new member of the men’s track and field team: Santiago White, from Sugar Land. The athletic department prepared a typical day of signing festivities: a press conference, some short speeches, an official backdrop for photos. But one thing was different: Santiago is 9 years old.

No, Santiago (or Santi, as he’s known by the team) won’t be running for Rice this year. Instead, he’s become part of the team through a joint effort between Rice Athletics and Team IMPACT, an organization that pairs children suffering from chronic illnesses with college athletics teams across the country. According to JP Abercrumbie, assistant athletic director for student-athlete development, the program helps give children like Santi an additional community to be a part of while they battle their illness.

“[Santi] has recently discovered a passion for running, so when Team IMPACT reached out … it was a great opportunity for us to see [how] our men’s track team was willing to be that big brother and support network for him,” Abercrumbie said. “And now he has about 40 new family members that he can lean on for [additional support].”

Rice has been working with Team IMPACT for a few years, and Abercrumbie said Santi joins two other children who have been partnered with Rice’s soccer and volleyball teams. In Santi’s case, he is battling cystic fibrosis, a lifelong disease primarily affecting the lungs. According to Abercrumbie, one of the men’s track and field team’s primary roles in the relationship will be to help Santi out when he’s undergoing care at the nearby Texas Medical Center.

“When he may be going through treatments and [feeling] a little down, it’s an opportunity to provide a support network for him to uplift him, so that he knows he’s not going through these treatments alone,” Abercrumbie said. “So instead of getting bogged down with the treatments or being in the hospital rooms alone, our guys … can go over [to the medical center] and visit him.”

Freshman track athlete Travis Dowd, who helped organize the signing day event, said the track and field team really got to know Santi when he spent a Saturday afternoon with the team earlier this year.

“[On] Saturday, we do long runs in the morning and then we eat brunch together as a team … and then go and play horse pool,” Dowd said. “[Santi] played [horse pool] with us, and now he’s into it too. He [beat] a lot of people — it was really funny; he had us all cracking up. Hopefully we can get him out to a lot more brunches and meets [this year].”

The signing day was a lighthearted event, with Santi fielding entertaining questions from the audience after his official signing. At one point, a track and field athlete asked “If you couldn’t run for the rest of your life, what sport do you think you’d play instead?” Without missing a beat, Santi replied “Horse pool.” The team roared its approval.

Overall, Dowd said Santi has had a positive effect on the team.