Review: The Weeknd welcomes madness and heals the broken heart with “After Hours” 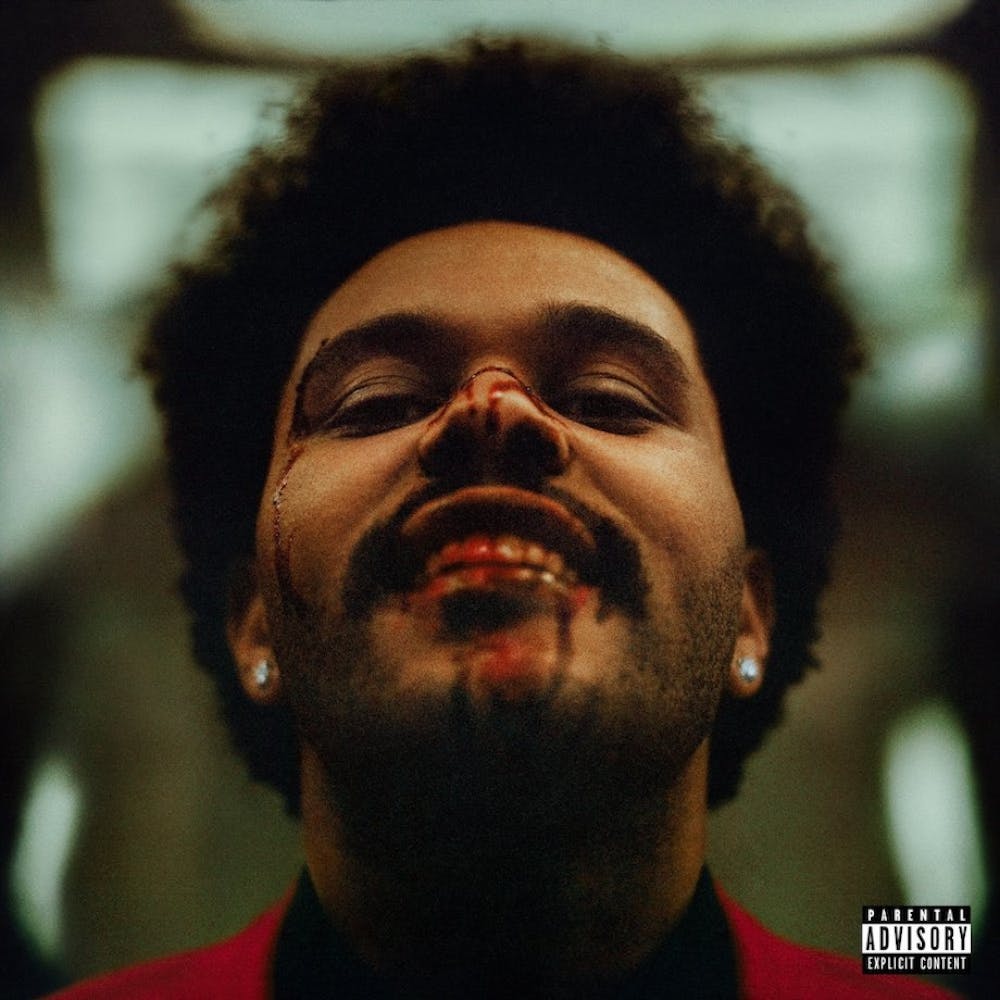 Drunk on city lights so bright he can’t see clearly, the Weeknd wanders in a Las Vegas landscape with shades on in the middle of the night so his eyes can’t be seen, the casino glowing a blinding gold sheen. This is the backdrop of the Weeknd’s newest album  “After Hours,” which was released March 20, a long awaited comeback hit of the synth-loving R&B artist. The singles of the album hit No. 1 on the Billboard charts not once but twice—the Weeknd has returned to haunt us all.

The Weeknd’s latest release belongs to the R&B/Soul genre with a total of 14 tracks running almost an hour long. The Weeknd, who was born as Abel Tesfaye, skyrocketed to fame in 2012 and has become famous for his seductive, strung-out aesthetic. “After Hours” is notable for its divulgence of the self. The first thing I would consider about any album is the album cover, and the “After Hours” album cover is simple: the Weeknd grinning, teeth bared, as blood drips down from his nose to his chin. The image is gruesome, hinting at the theme of gore reiterated in the After Hours (Short Film) edition that the Weeknd premiered before the release of his album.

Other articles have suggested an aspect of horror in the album, but I disagree. Horror is not the greatest aspect of the story the Weeknd is trying to tell us through his newest work. Horror is not to be confused with fear. The Weeknd sings as though he is afraid of something inside, not as though he is trying to frighten his audience. To demonstrate this, listeners should now consider comparing this album’s tracks to the Weeknd’s previous works. He has undoubtedly put out many headlining songs, from “Starboy” to “Can’t Feel My Face”, emotions ranging from gloating and arrogant to pure joy and pleasure. However, in the singles of “After Hours” there seems to be too much glam, too many flashing lights and fake smiles, resulting in something flamboyant to the point of perplexion. The extravagance of the display and overwhelming beats seemed to be a bit too much for just a catchy tune.

“After Hours” sees the Weeknd taking a moment to face off his inner demons while racing through the Vegas cityscape. In his highly popular music video “Blinding Lights”, this violent inner turmoil is personified by him bloodied and speeding through Vegas in a shiny, silver car and dancing in the middle of the street. As blood drips down his face in the video’s introduction, it seems as though the Weeknd had lost it, which may be precisely the point.

This music video raises many questions about the Weeknd’s newest album. All of them revolve around one major theme: the method behind the madness. Or to be more precise — the misery. “Blinding Lights” catches the ear with mystery, the ominous deep bass and synth keyboard reflecting the introduction to a Star Wars movie before the drumline kicks in. The Weeknd’s destitute appearance in the music video does not match the song’s upbeat tone, and much less do his lyrics (“No one’s around to judge me / I can’t see clearly when you’re gone”). His lyrics emphasize an intense addiction to someone’s presence in the same way one would be to a drug. This theme of dependence makes sense, though. Considering his rocky relationship with his supermodel ex-girlfriend Bella Hadid, the Weeknd’s tracks are bound to reflect the complexity and restless nature of his unsuccessful romance story. Undoubtedly, the tracks in his album describe a longing for love yet an inability to have or keep it.

But “Blinding Lights” is only the beginning to the Weeknd’s latest story. Beyond its singles, “After Hours” is profoundly emotional, revealing a vacant, apathetic regard for the fast life in the face of heartbreak. As I listened to the remainder of the album, most songs did not repeat the highs reached in “Blinding Lights” and “Heartless”. There is a softer, more angelic quality imbued in the Weeknd’s voice, and there is something empty about the echoic effect this creates. But beyond the timbre are Tesfaye’s words. On the track “Hardest to Love,” he sings lonesomely, “The house I bought is not a home” and sorrowfully admits to his past partners that loving him was a burden for them. In the vulnerable “Snowchild,” the Weeknd sings, “If I didn’t make it, then I’d probably make my wrist bleed” and “Taking care of families for my brothers when they locked up,” intimately revealing past struggles. He sings this like he’s almost out of breath, gasping for air and a reason to continue. The synth-heavy instrumentals of “Save Your Tears” are  confusingly upbeat as he sings of making his lover cry when he runs away, a verse he repeats countlessly throughout the song as if to emphasize his inability to face her while she weeps. Unlike the glamour of his singles, the Weeknd takes a deeper look at his heartbreak and asks himself why he runs. Through these tracks, perhaps he is trying to find just a bit of how it feels like to be human again.

Even with the psychological and personal considerations of “After Hours,” The Weeknd still enjoys having a bit of fun by experimenting with heavy beats and synth soundscapes. In particular, “In Your Eyes” funks on a saxophone solo that dominates the end of the track, a fascinating addition to the song that brings a fun 80’s twist to the track. The Weeknd certainly has his soulful moments, true to his soul genre, where he speaks to his listener from his broken heart about his times of suffering. But the real magic happens when he does so with a smile on his face, even through the blood, sweat, and  tears. Perhaps the horror that other critics suggested was a part of his new album is really just the Weeknd facing his own demons.

And faces them he does, alone and a bit off his rocker. But he’s there, breathing and struggling to find happiness again. In his newest album Abel transforms his internal beasts into the beauty that is his work. He bears his pain by grinning through it, and  in the end, there is no denying that the Weeknd’s beasts coexist with the beauty he extracts from them. That is the Weeknd’s “After Hours”: a rediscovering of the self by the self.

“After Hours” is available to stream on all major music platforms.