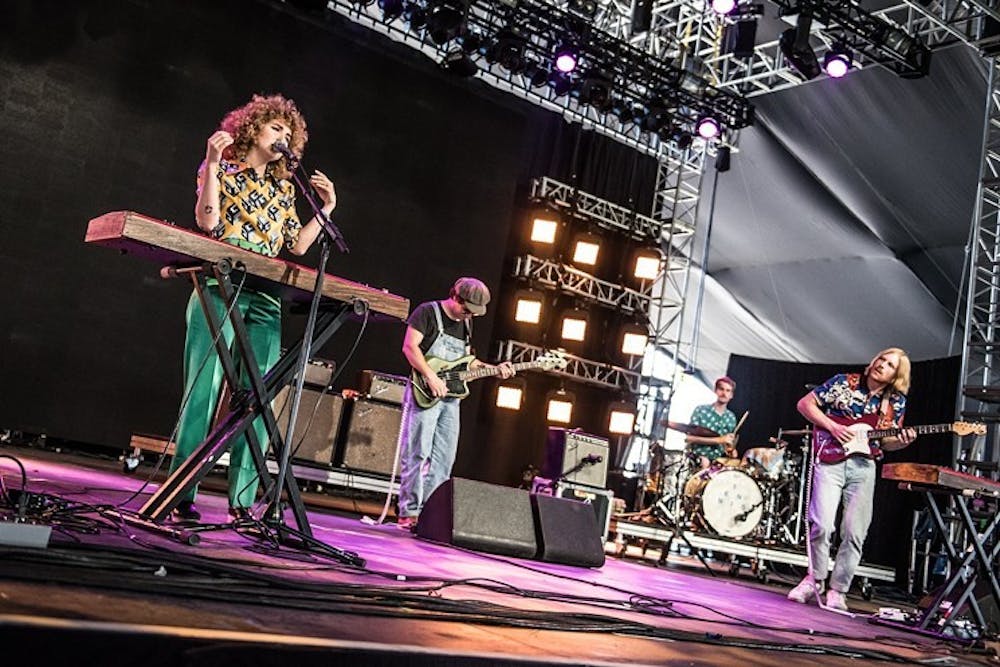 Last Monday night, as indie duo Tennis took the stage at White Oak Music Hall, frontrunner Alaina Moore and I had two important things in common: We both were sporting fabulous jumpsuits, and we both were horribly sick with head colds.

“I woke up with a cold today because I have the immune system of a Victorian orphan,” she bantered between their first and second sets. “I actually took some voice lessons with Usher’s voice teacher before this tour ... doesn’t matter because I’m fucking sick today.”

From fighting off illnesses (of which Tennis has had a notable few) to setting sail all across the globe, indie-pop sweethearts Moore and husband Patrick Riley have remained attached at the hip for over a decade. After meeting in their junior year of college, Moore and Riley saved up enough money to embark upon a seven-month seabound adventure along the Eastern Seaboard post-graduation. While bobbing on the Atlantic, the duo wrote most of their first album, “Cape Dory,” springboarding them into the limelight in which they’ve since basked.

Last year, the duo took to the seas once again to write their newest album, “Swimmer,” a nine-track triumph released this past Valentine’s Day. Sun-soaked and dreamy, the album juxtaposes the warm touch of ’60s-inspired soft-pop with heart-wrenching lyricism, exploring themes from the bittersweet reality of growing old to the meaning of matrimonial love after passion’s first fire is replaced by a more perduing blaze.

“‘Swimmer’ is a tour of some of the darkest times in our lives,” the duo posted on Facebook this January. “But it is not a dark record ... it is us at our most vulnerable.”

Seeing Tennis live brought made this juxtaposition tangible, the audience split between energetic bopping and thoughtful swaying. Equally as entrancing as Moore’s lyricism however were the visible relationships between the performers on stage. Each of the four musicians — Moore, Riley, their drummer and their bassist — seemed to exist in their own individual reality throughout the night. Hidden behind a sheet of swooping bangs, Riley predominately kept his back to the rest of the musicians, rarely peeling his eyes from his fingers flying up and down the neck of his instrument. Though on occasion deliberately placing herself center-stage and gazing intently out into the audience, Moore also rarely strayed from her perch on stage right, maintaining a consistent distance between herself and her husband for the majority of the performance. Set behind the band’s frontrunners and rarely in the spotlight, the other two band members were similarly absorbed in their own worlds, tux-clad and crouched over their instruments. If one were to judge musical compatibility on physical connectivity, the performance to an outside eye might have merely seemed like a patchwork of disparate creative energies.

Yet, the performance was anything but disjunct. Although never directly speaking or making eye contact with one another (at least until the final set), Moore and Riley’s tangible emotional intimacy and musical compatibility charged the entire hall with an electricity so palpable you could hear audible gasps anytime Moore shifted her gaze toward her husband. Each band member’s musical contribution, though certainly centered on individual artistry, contributed a crucial and perfectly calculated dimension to the performance. What appeared as disjuncture to the eye translated into a wholly enrapturing web of musical relationships in practice.

On the car ride home, my friend and I were curled up in the backseat discussing the often disappointing realities of live indie concerts. Prone to lackluster audiences and instrumentation that doesn’t always translate well to large spaces, soft pop/rock sometimes feels like a letdown when performed live. Yet, while Tennis’ crowd itself wasn’t anything to write home about, experiencing Moore and Riley’s live musical and emotional relationship imbued their music with an entirely different kind of electricity, impossible to understand from an auditory experience alone. Watching Moore and Riley effortlessly transfix an entire room with a prolonged look or a loving grin brought an entirely new and wonderful understanding to their music; seeing Tennis live, even when tired and sniffly, is an experience you simply can’t pass up.