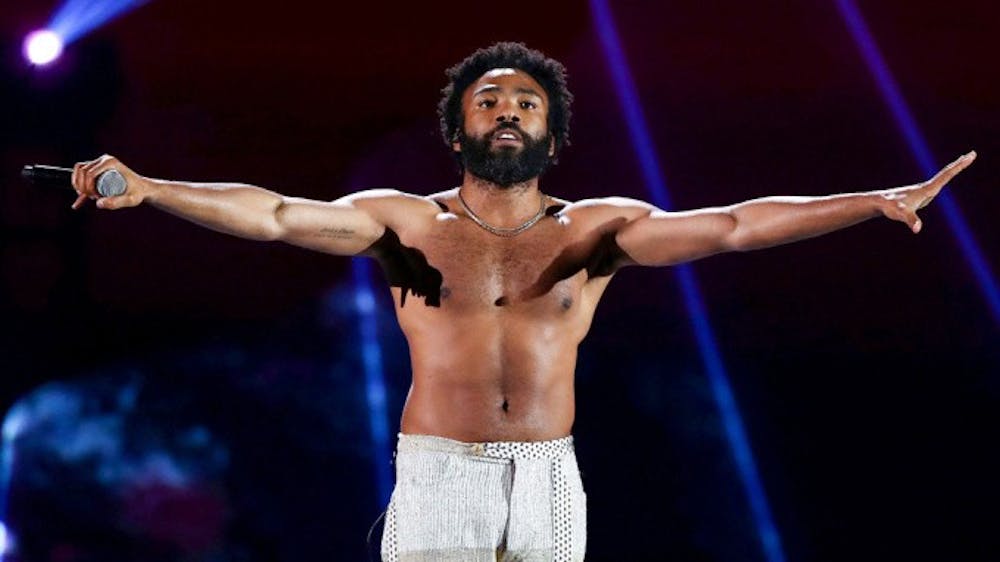 These days, it seems that everything is undergoing an unstoppable metamorphosis, shedding its old skin and emerging anew and unexpected. Donald Glover seems to be the personification of this transitory moment, since his recent album “3.15.20” has been rumored to be the final project under his psuedonomic stage name, Childish Gambino. With “3.15.20,” Glover is leading the charge into the future with no less anxiety than the rest of us, but with the impeccable finesse desperately needed to remind us of our humanity in the face of apocalypse.

According to the mass media website Genius, the album was first released on donaldgloverpresents.com as a looping livestream on March 15, thus explaining the album’s title. Later that same day, the music was removed and replaced with a timer counting down to March 22. When the timer ran out this past Sunday, “3.15.20” appeared across all major streaming platforms. Save for two songs, the tracks were named by their timestamps rather than their original song titles, which were listed in the metadata of Glover’s website during the livestream. Glover told Genius that he decided to replace the track titles with their timestamps to emphasize the importance of listening to the full album straight through.

While it’s already a reviewer’s job to listen to an album from top to bottom, I concede that making the journey from start to finish is vastly more rewarding for any listener, namely because of the meticulously intentional transitions between each track. The final 30 to 60 seconds of every song are reserved for recalibration as Gambino briefly rips you from the music to look out onto the landscapes he’s constructing, which seem both familiar and alien at the same time. The transition between “Time” and “12.38” (also known as ”Vibrate”) features cricket chirping interrupted by futuristic clicking and whirring; an alien spaceship descending onto an unexpected rural field. “32.22”/“”Warlords” is punctuated by moos, chicken clucks and meows as aggressive chaos suddenly devolves into a stomp ‘n’ clap hoedown on “35.31”/”Little Foot.” Sure, you could describe “3.15.20” as a journey, but I think it’d be a more accurate credit to Gambino’s artistry to say he is building an entire world — an amalgam of provincial and futuristic landscapes that captures our society at its present critical nexus.

The track “0.00,” listed in the metadata as “We Are,” leaves you to fill in the blank, serving as the short cinematic intro of the album. The second track “Algorhythm” was previously released exclusively to fans who purchased tickets to Gambino’s “This is America” tour, along with the unreleased track “All Night,” in a secret email asking fans not to share the then-unfinished tracks. Now in its final form, the track is an ominous yet danceable experimental track with electric bass distortion and gritty rap vocals a la Kanye West’s “Yeezus.” Its lyrics deliver prophecies about the evolution of modern humankind as we progress inevitably further toward “supercomputer status.”

Saturated with laser-like synths that bring to mind retro arcade games like Galaga or Robotron, the next track, “Time,” taps into end-of-times anxiety that’s familiar to us all by now due to climate change and most recently, the COVID-19 pandemic. Featured artist Ariana Grande and Gambino trade off soulful verses about drowning in rising oceans and an urgency to come together as the clock on our existence seemingly winds down more quickly every day. Glover personally felt the effects of the COVID-19 outbreak when FX put Glover’s Emmy Award-winning series “Atlanta” on hold due to coronavirus concerns. If you’ve been searching for a not-too-depressing song that still captures all your anxieties about the utter uncertainty of the future, I highly recommend this GrandexGambino masterpiece for your personal quarantine playlist.

Capping off his list of contributing artists are 21 Savage, Ink and Kadhja Bonet on the track “12.38”/“Vibrate.” The experimental R&B track includes a familiar Gambino flow and sees 21 Savage rapping about police brutality, ushering in a portion of the album which deals with Black cultural struggles. On “19.10”/”Beautiful,” a bouncy, danceable industrial beat accompanies Gambino as he sings, “To be beautiful is to be hunted” to describe the Black experience as a complicated balancing act between practicing self-love and shouldering societal pressures, namely the ways in which society appropriates and capitalizes off of Black culture.

Pivoting from social commentary, “24:19”/“Sweet Thing/Thank You,” is the most romantic and sensual track on the album as Glover serenades his lover, likely his partner-presumed-wife and mother of his two children, Michelle White. With a noticeably more fleshed out instrumentation including delicate piano, grandiose organ and funky saxophones, this gospel-infused song delivers precisely the cohesion with Glover’s impassioned vocals that I was missing in “12.38.”

The transition between the love letter and “32.22”/“Warlords” is almost frightening — a steadily accelerating drumline accompanies intense breathing that grows increasingly panicked before slowly falling into defeated, heavy sighs. The anxiety-inducing transition calls to mind Gambino’s wide-eyed, terrified expression as he sprinted away in the final scene of his critically acclaimed music video for “This is America.” A low-pitched, pulsating beat then explodes into a cacophony of whooping and chanting, accompanied by aggressive, barely intelligible lyrics from Gambino. I couldn’t help but picture a wretched crowd of partygoers dancing to their death in a pixelated nightclub being corrupted by a computer virus.

The juxtaposition between sweet romance and fiery, urgent violence is jarring, and purposely so. Glover illustrates that the private sphere of familial love and serenity is permanently and hopelessly enveloped in a larger public landscape of chaos and violence, one which is getting increasingly difficult to shield from the eyes of children. All this is manifested in “47.48,” also known as “Don’t Worry About Tomorrow (The Violence),” a breezy beach track with instrumentals reminiscent of its sunny predecessor “42.26,” which was previously released as “Feels like Summer” in 2018. Its lyrics, however, hear Glover emphasizing the struggles of modern society to balance compassion with seemingly escalating violence brought on by hyper-critical social media, concluding with an endearing conversation between Glover and his son Legend, who answers his father’s question, “Who do you love?”

The album comes to an exuberantly triumphant conclusion with “53.49,” also known as “Under The Sun.” This track shows Gambino rejoicing not only for the love he’s found in his family, but the love he’s rediscovered in himself. I would be truly surprised if you could resist dancing in your seat once the song catapults into rich, hard-hitting instrumentals and Gambino’s impassioned funk falsettos. Gambino’s ability to lift the spirit culminates in this track — his ultimate swan song as Childish Gambino — making it my favorite on the entire album, though it’s not without significant competition.

“3.15.20” reveals Glover’s undisputed talent for weaving storytelling and subtle social commentary into illustrious soundscapes and infectious funkiness. He seems to ask, even as the sun swells and threatens to rain fire on concrete jungles and rolling fields alike, Why shouldn’t we still dance?