Men’s tennis set for two matches at home this week 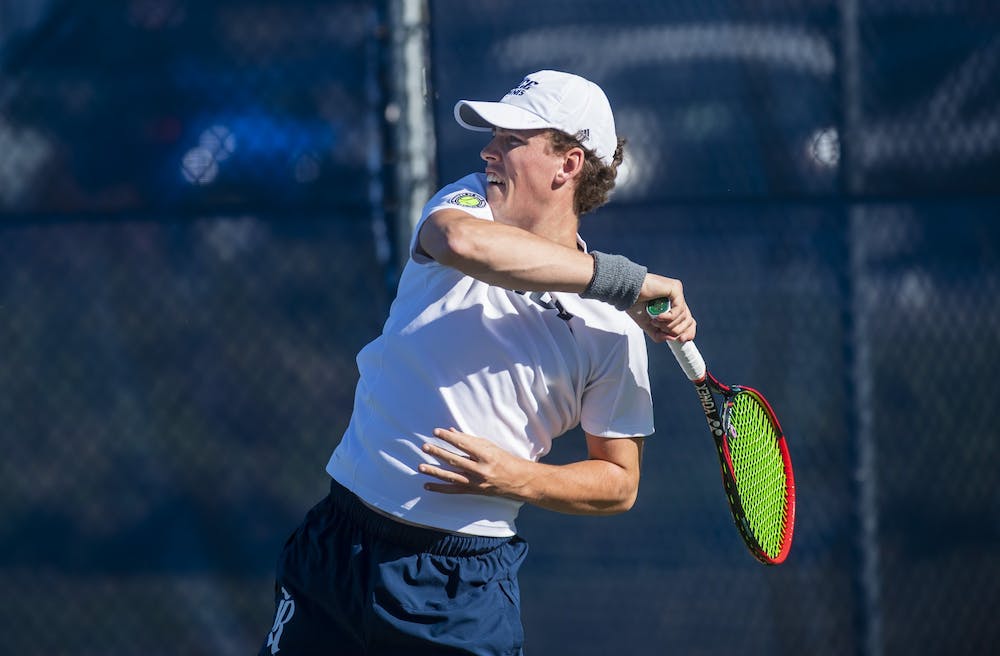 After winning a match against Prairie View A&M University on March 2 in which the Rice men’s tennis team convincingly won the doubles point and all six singles matches, the Owls lost 1-6 to No. 3 University of Texas, Austin. Rice currently stands with four wins and seven losses on the season, but can rewrite the script during two upcoming matches against No. 8 Texas Christian University on Wednesday and defending Conference USA champions Middle Tennessee State University on Saturday.

In the team’s match against Texas, Rice’s sophomore doubles pair of Campbell Salmon and Karol Paluch lost their first doubles match. However, the Owls stormed back with juniors Sumit Sarkar and Conrad Russell defeating the No. 9 doubles pair in the nation. The Owls then successfully secured the doubles point with a win on Court 3 after the doubles pair of senior Eric Rutledge and freshman Wes Barnett won their match 6-3. Head coach Efe Ustundag said winning the doubles point was one positive the Owls can draw from the match.

“Anytime you are picking up a doubles point against a top-five team and beating a top-10 doubles duo, you [have] to feel positive about it,” Ustundag said.

Singles play proved to be a far different story for the Owls, however, after Rice lost all six singles matches to give the Longhorns their 15th straight victory against Rice. The Owls opened up singles play strongly after Rutledge had three set points in his first set and junior Karol Paluch won his first set 6-1, but the Owls struggled to string together enough winning sets on any of the courts to secure a singles point.

While Ustundag said the team deserves credit for initially carrying some momentum from doubles into singles play, he also said that UT, the reigning NCAA champions,  demonstrated resilience.

“Obviously, they are very good and we expected Texas to come out and make some sort of adjustments [after doubles play] and they did,” Ustundag said. “When we lost the momentum, we really struggled to get back.”

While the Owls were shut out in singles play, Ustundag said he feels like the team can draw a lot of positives from the match as they face two highly ranked opponents this upcoming week.

“We were upset we lost the match, but at the same time a lot of the guys felt like they were almost there,” Ustundag said. “I do feel like we are feeling better about ourselves than we did on Saturday and yet, we are going to be challenged [when we play] against an equally as tough team on Saturday.”

After defeating the No. 9 doubles pair in the nation, Russell said he and Sarkar are proud of the victory.

“It was a big win for Sumit and I,” Russell said. “We’ve obviously had success before, but it feels good to do it with Sumit because we have had so much success prior to that win.”

According to Sarkar, Rice’s performance in doubles against Texas can serve as a building block moving forward for the rest of the season.

As the Owls head into a match against the second-highest ranked opponent it has faced this season, the Owls will have to focus on having a short-term memory in order to bounce back. According to Ustundag, he thinks that two wins against TCU and Middle Tennessee would change the storyline of the season.

“Hopefully this week, one or two matches come together so we can continue to trend in the right direction but with a little more confidence,” Ustundag said. “We still have six more teams left in our schedule that are ranked within the top 50 in the nation.”

Russell said he also believes this weekend’s matchups are crucial.

“This could be a serious turning point in our season and it’s a great opportunity to do it on our home court,” Russell said.

Wednesday’s match against Texas Christian will also be a valuable opportunity for the Owls to rewrite their imbalanced history against the Horned Frogs. As a program, the Rice men’s tennis team has lost five consecutive matches against TCU after the team was completely shut out in its last match against TCU when they faced them in Fort Worth in March 2019.

In the Owls’ quest to qualify for a bid in the NCAA tournament, they face TCU on Wednesday at noon and then Middle Tennessee at 5 p.m. on Friday. Both matches will be played at home, at the George R. Brown Tennis Center.