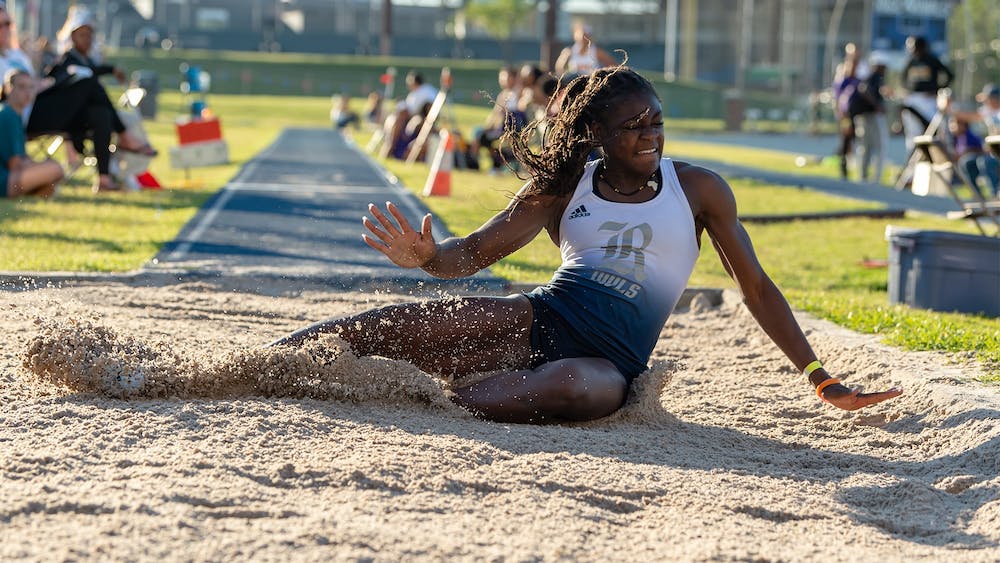 Michelle Fokam triple-jumped 13.32 meters at last week’s Conference USA Track and Field Championships — soon, she’s hoping that her triple jump will land her over 6,600 miles away. That’s because Fokam, a three-time NCAA All-American finishing up her senior season, has her sights set on Tokyo for the 2020 Summer Olympic Games.

“This summer, I will be competing at the Olympic trials in hopes of becoming an Olympian,” Fokam said.

If all goes according to her plan, a trip to Tokyo would be the latest addition to a resume that already includes two C-USA Field Athlete of the Year awards and eight C-USA Championship first-place finishes, among many other awards. Fokam says that her consistent success at Rice can be attributed to a combination of her confidence, competitiveness and work ethic.

“I love to compete and I love the pressure of meets,” Fokam said. “I always use it to my advantage to push myself.”

But according to Fokam, her academic achievements have been even more important to her.

“I have been on the [C-USA] Commissioner’s Honor Roll every single year,”  Fokam said when asked to name her most significant personal achievement.

Fokam, a psychology major from Lovett College, also said her community service work is very important to her. She said that she volunteers weekly with The Forge, a Third Ward-based organization that aims to “inspire and empower participants’ spiritual, educational and economic growth.”

Fokam first became involved in track as a hurdler. However, according to Fokam, after her coach suggested she switch from jumping over hurdles to jumping for distance, she quickly discovered her natural proficiency in distance jumps.

“I first started triple and long jumping when I was a seventh grader,” Fokam said. “In all honesty, I wanted to be a hurdler, but my coach, Coach Lance, forced me over to the runways and told me that I am a jumper and this is where I should stay, and I did stay. I have been a jumper since then.”

From there, Fokam said that it took her some time to understand just how good she was.

“I have always competed well in the [jump events],” Fokam said. “Though I knew I was actually good my junior year of high school.”

This season, in addition to her customary personal success, Fokam has been a crucial part of Rice’s team success. This season saw the Owl women’s track and field team win its first indoor conference championship in a decade, and Fokam finished first and second in the conference in the triple jump and long jump respectively. For many, in a sport as individually oriented as track and field, that level of personal accomplishments would overshadow team success. But according to Fokam, for her that was never a question.

“My success does mean a lot to me, but the team’s success means so much more,” Fokam said. “When I found out we won the conference championship meet my eyes [welled] up and a few tears came out, tears of joy.”

While that kind of success can lead to increased expectations, Fokam said she doesn’t allow that to affect her mentality during competitions. She says that she goes into each meet armed with headphones while listening to the entire Megan Thee Stallion discography, which helps her maintain the same focus every time she steps out onto the track.

“I do not necessarily go into [a track and field] meet with set expectations for marks that I would like to meet,” Fokam said. “What I expect myself to do is execute my technique correctly and make sure that I enjoy myself and have fun.”

Before Fokam takes on her Olympic goal after achieving so much success at Rice, she’ll look to cap off her Owls career with a strong finish to the season. How her season will end remains to be seen. But according to Fokam, if she maintains her mindset, the rest will fall into place.

“My goals for the rest of the season are to stay confident, believe in myself and jump far,” Fokam said. “If I do [that], good things will come.”