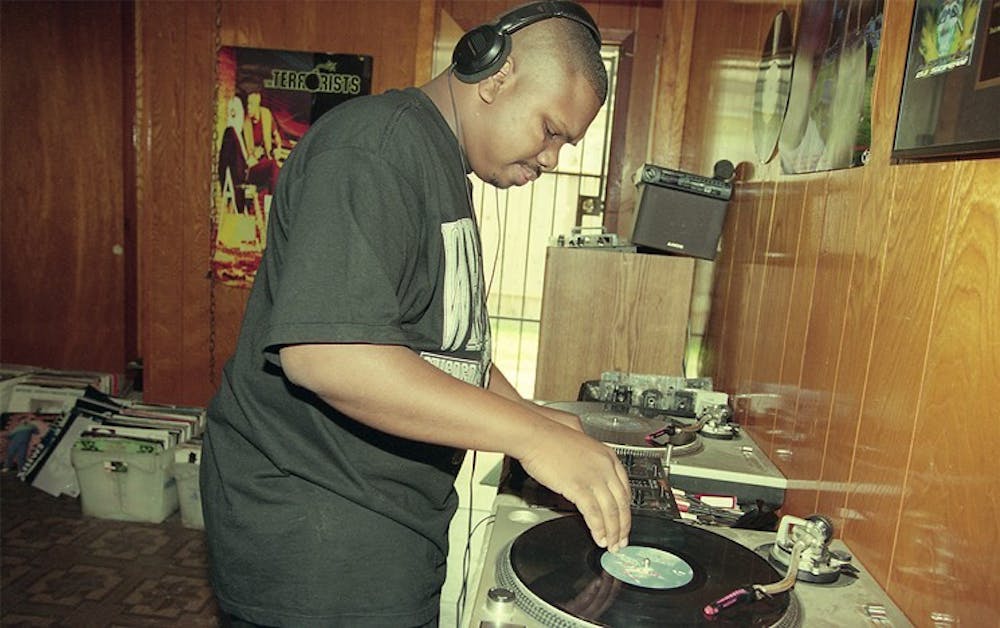 Two decades after his death, DJ Screw’s legacy has been captured and immortalized by 15 visual artists at the Contemporary Arts Museum Houston in a unique  two-part exhibition titled “Slowed and Throwed: Records of the City Through Mutated Lenses.” The exhibit is inspired by the techniques of the chopped and screwed genre, which DJ Screw, born Robert Earl Davis Jr., developed in the early 1990s, and which has since become synonymous with Houston’s hip-hop identity.

DJ Screw made his name by creating “chopped up” versions of hip-hop music, where he would slow tempos down to a crawl, reduce pitch, chop lyrics and layer songs. This distortion transformed the key and mood of the slowed tracks. Using just two turntables to generate a brand new experimental genre, Screw went from selling his cassettes, called “Screwtapes,” out of his home in South Park, to establishing his celebrated record store Screwed Up Records & Tapes in 1998.

The first part of “Slowed and Throwed” is an archival exhibition featuring curated  materials from DJ Screw’s life and work, which were mostly drawn from the Special Collection at University of Houston Libraries. The archive is built to resemble and pay tribute to the original Cullen Boulevard location of the iconic music shop. Housed in the CAMH’s circular Nina and Michael Zilkha Gallery, the second half of the exhibition is  a vibrant explosion of color and form uncoiling before your eyes. The parallels to DJ Screw’s musical techniques are evident in the diversity of mediums and materials utilized in the visual art portion of “Slowed and Throwed.” Photography, collage, film, music and sculptures made of cotton, feather, wood, cans and quilts are synthesized to evoke the sense that the exhibition itself is a mashup. Chopped and screwed music saturates the room, making the experience relaxed and rhythmic.

The curatorial texts are designed to introduce each segment of the artwork display as it relates to elements of DJ Screw’s music, with titles such as “Doubling,” “Experimentation,” “Media Transfer,” “Slowing Time,” “Layering and Collage,” “Sampling” and “Reclamation and Remembrance of Place.”

One of the first pieces upon entering is Sondra Perry’s “IT’S IN THE GAME ‘17 or Mirror Gag for Vitrine and Projection,” a film that reclaims the video game character of her twin brother Sandy Perry, a Division 1 basketball player for Georgia State University, whose likeness and statistics were licensed by the NCAA without his consent to game developer EA Sports for its 2009 and 2010 NCAA video games. Another video installation is Lisa LaFleur’s “Don’t Worry Baby,” found in the far gallery, where a figure lip syncs the chorus of The Beach Boys’ “Don’t Worry Baby” on a loop. The video is projected on multiple screens placed in front of each other with an increasing number of fractures appearing on successive projections. According to the artist, the work investigates what happens when you inhabit other people’s materials. In this instance, queer women embodying harmonies originally written and performed by cis men about heterosexual love.

Drawing attention to inequities stemming from race, gender and sexual orientation is a central concern of the exhibition. Many of the collage works featured in the gallery layer and blend images from pop culture, interpolating the past into the present and using the resulting fusion to imagine alternative realities. A quilt by Ayanna Jolivet McCloud displays frequently appropriated photographs of Black protesters. Another striking collage places a series of Black men with raised fists against the Statue of Liberty’s raised arm.

As a visual manifestation of DJ Screw, the exhibition succeeded not just in resonating his creative methods, but also in capturing the value of playing around and having fun with artistic mediums.