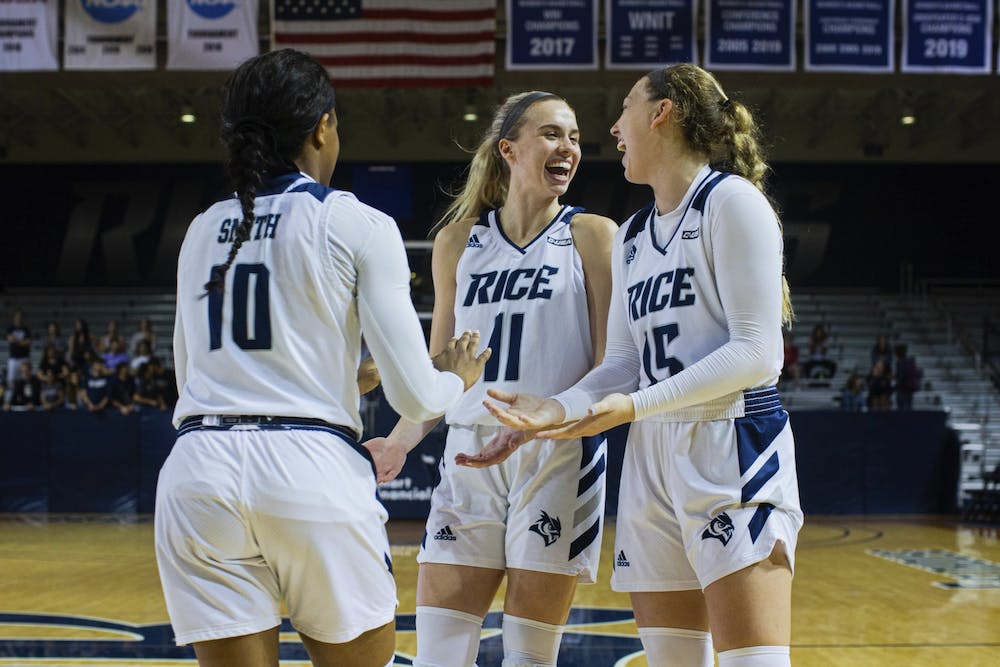 The Rice women’s basketball team, now riding a nine-game win-streak, has reached strong mid-season form. Through its first 20 games, Rice has posted an impressive 14-6 record, and is 8-1 at Tudor Fieldhouse, where its only loss came at the hands of No. 5 Texas A&M University. This week, the Owls look to continue their strong stretch when they take on the University Alabama, Birmingham on Thursday, and Middle Tennessee State University on Saturday.

UAB and MTSU both currently sit in the top half of the Conference USA standings, at third and fourth in the conference, respectively. The Owls, with their undefeated 9-0 conference record, remain C-USA’s top team, following a season in which they posted a perfect 16-0 C-USA record. Head coach Tina Langley, who is now in her fifth season at Rice’s helm, said she credits the team’s commitment to preparation for its sustained success.

“We just take [it] one game at a time,” Langley said. “This team has really valued the importance of preparation for the game that is in front of us. By doing this, we improve in each game we play.”

The Owls’ 2019 team features many young players in prominent roles: freshman forward Lauren Schwartz and sophomore guard Jasmine Smith both start for Rice, and freshman guard Destiny Jackson and sophomore guard Haylee Swayze both also feature in the Owls’ rotation. According to Langley, the underclassmen have risen to the challenge, in conjunction with leadership from the team’s older players.

“I think that everybody on the team has continued to improve,” Langley said. “Everybody, including our freshmen, continue to get better as the season goes on.”

Against UAB (15-7, 7-3 in C-USA), the Owls will be tasked with slowing down the most prolific offense in the conference. The Blazers are scoring 76.9 points per game, shooting 46.2 percent from the field and 41.2 percent from 3-point range: all three marks lead C-USA. Blazer senior guard Rachel Childress is the most potent perimeter threat in C-USA, ranking second in the country with 3.8 3-pointers per game and third nationwide at 47.5 percent 3-point shooting. UAB is also on a winning streak of their own, which currently stands at six games. Langley said Rice’s top priority will be slowing UAB’s offense down.

“We always think about the team in front of us,” Langley said. “We have one game ahead of us and that is UAB. They are a very talented team that can really score the ball well, so we need to be great on the defensive end against them.”

Middle Tennessee (15-7, 7-3) has also had its share of success this season, beating Auburn University, Virginia Commonwealth University and Texas Christian University by double digits. Senior forward Charity Savage leads the conference in both offensive and defensive rebounds per game, and ranks fourth in C-USA in blocked shots. According to Smith, the Owls must prioritize their preparation to be able to win tough games.

“As a team we focus on first being accountable for ourselves,” Smith said. “If you can do that then you can focus on the other small things such as being able to control things that are within your control in the flow of the game.”

This season, average attendance at Rice home games is 973, which ranks 9th in C-USA (as of Saturday). Smith said she hopes Rice fans exceed that number during the next two games.

“We need you to be there,” Smith said. “We have two very important games for the conference coming up. Be there and be loud!”

The Owls face UAB on Thursday at 7:00 p.m. before matching up against MTSU on Saturday at 2:00 p.m. Both games will be played at Tudor Fieldhouse.