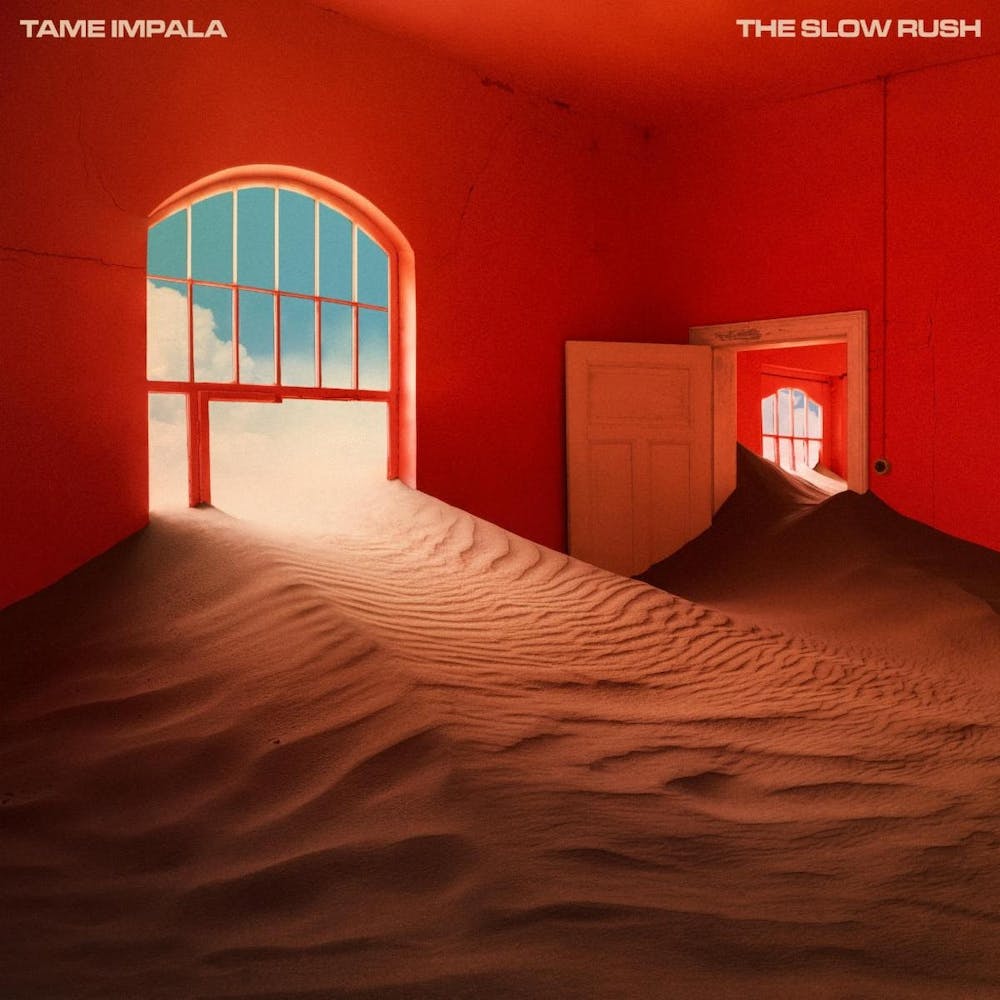 Making an album as creatively rich as “Currents” was always going to be a tough job for Kevin Parker, and his newest album “The Slow Rush” is the comparatively-lackluster proof.

“Currents” was Tame Impala frontman Parker’s first big move toward his own unique brand of psychedelia, plucking groovy bass lines straight from the ’70s to give shape to amorphous blobs of paisley-pop soundscapes. While Parker’s first two albums — “Lonerism” and “Innerspeaker” — showcased his astonishing mastery of the psych-rock genre, “Currents” was a testament to the 34-year-old performer’s growth and versatility as both an artist and a studio wiz. Pulling from a plethora of genres, Parker created a psych-pop album that was simultaneously chock-full of catchy earworms and his signature sonic maximalism. Hearing “Currents” live for the first time at Boston Calling Music Festival last May, I found myself transfixed by the album’s adaptability; “Currents” was a triumph precisely because it could be enjoyed through both headphones and festival loudspeakers.

Yet, Parker’s newest endeavor, “The Slow Rush,” falls short of the creative genius of “Currents.” Although any track off the album could easily work in a festival set, the 12-track’s lack of structure creates an album that is a disjointed sonic experience instead of  a united musical work. While “The Slow Rush” continues the drift away from the Lennon-esque psychedelia of Tame Impala’s first two albums, it simultaneously strays away from small-scale palatability and musical ingenuity.

The album opens with the track “One More Year.” Parker’s first synthesized vocals stretch and unfurl outward through space, setting the atmosphere and introducing the album’s leading lady: the passage of time. Just like his past three albums, “The Slow Rush” is predominantly occupied with a singular theme that permeates the entire work.

“I’m being swept by this notion of time passing,” Parker said in a New York Times interview last spring. “There’s something really intoxicating about it.”

On the next track, “Instant Destiny,” Parker continues his exploration with a percussive beat and vocals drenched in studio effects, nostalgia and a boldness that only comes from being head-over-heels in love. “Borderline,” the album’s third song, falls closest to the “Currents’” brand of psychedelic pop — a sugared whirling of instruments and synthesizers anchored by a subwoofer-worthy bassline. Any Eagles fan’s ears will perk up at the onset of “Posthumous Forgiveness,” an open letter to Parker’s late father that begins with a guitar line reminiscent of that in the Eagles’ 1976 hit “Hotel California.” Pairing a bossa-esque beat with an arpeggiating guitar line, the sixth track of the album, “Tomorrow’s Dust,” delivers a bittersweet ode to temporality.

“Our regrets tomorrow are our actions now,” Parker says in his Apple Music lyrical commentary. “Future memories are present day current events. Tomorrow’s dust is today’s air, floating around us as we speak.”

The rest of the album’s tracks generally proceed as such, with fear-tinted nostalgia and meditations on the passage of time underpinned by mind-expanding maximalist soundscapes.

Here’s the thing: This album is so deeply intentional. Every chord voicing, instrumentation, lyric and studio effect was chosen with thought and deliberation. Due in part to personal reasons, Parker took five years to create the album and his process was meticulous. Even after the initial solo-debut of “Borderline” in 2019, Parker remained unsatisfied and pulled the track back into the studio for revisions before the album’s release.

“I was so in my own head about the song,” Parker said in an interview with radio station Triple J  released last Thursday. “The way it sounds now is the way I was hearing it when I released it the first time.”

The intent behind every stylistic choice and the emotional rawness behind every lyric is palpable. Parker’s extensive and diverse musical repository also takes center stage, weaving an intricate musical quilt with patches of ’80s R&B (“Breathe Deeper”), disco-funk (“Is It True”) and acid house (“One More Year”), just to name a few.

Yet, as I was writing this review with “The Slow Rush” playing on repeat in the background, I would often forget that I was listening to anything at all. Parker’s untethered, expansive soundscapes feel diluted and watery when consumed on a small scale. In “Currents,” Parker’s aural environments emerge clear and defined, pulsating beats tethering soundscapes together and creating a directionality that emphasizes the “pop” in “psych-pop.” Songs like “The Less I Know the Better” that entertained huge festival crowds also found their way onto party playlists, mixtapes exchanged between high school sweethearts and everyone and their mothers’ Spotify Wrapped. “The Slow Rush,” on the other hand, feels directionless — a well-intended effort that  ultimately finds itself mired in self-awareness and creative stagnation. Few of the tracks stand exceptionally well independently, and horizontal sonic expansion takes precedence over interesting musical motifs or melodies. For such a deeply meaningful album, it all feels rather … meaningless.

My point here is not that the album won’t be successful, widely listened to or cohesive with the rest of their body of work: In fact, my point is exactly the opposite. “The Slow Rush” stands as a creative concession, a mere treading of water at a point in Parker’s career where he could have created a truly envelope-pushing work. Each song on the album could have easily been tacked onto “Currents” as a filler track without anyone batting an eye, and that feels like a letdown.

On the other hand, maybe that’s the entire point. Heady soundscapes are Tame Impala’s claim to fame, their pièce de résistance. Maybe it’s fruitless to analyze a Parker work, especially one imbued with so much intention and care, with the normal tools of music criticism. Maybe, Parker’s not here to give us a “Currents”-shattering artistic triumph; maybe he’s here, just like the rest of us, to literally vibe.

“The Slow Rush” is available on all major streaming platforms.