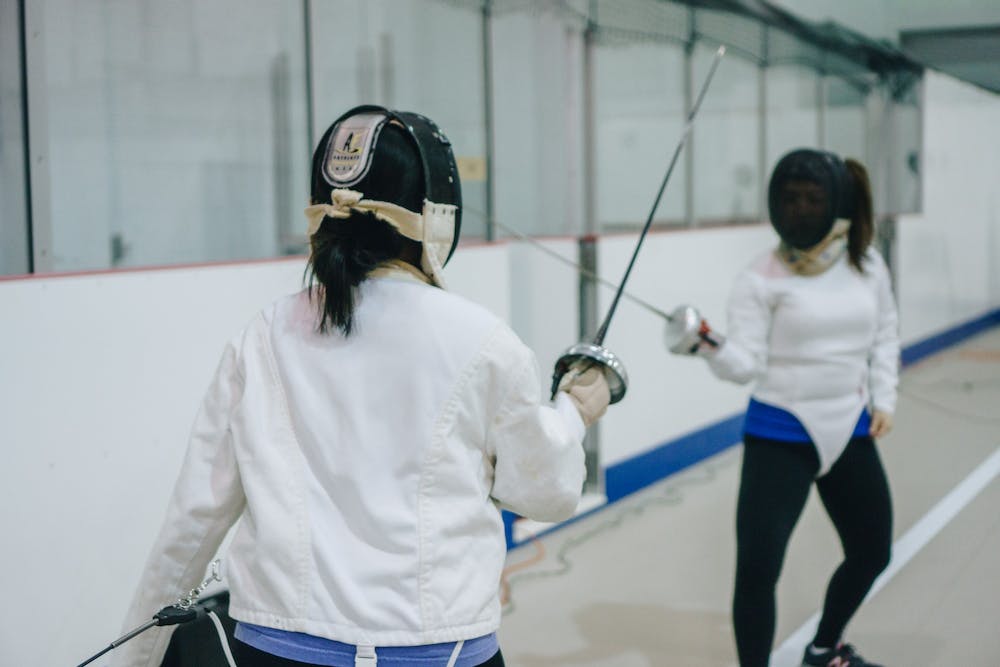 On any given Saturday, Jorge Zepeda can be found working up a sweat. But instead of hitting the gym or getting on the field, Zepeda has chosen a different way to exercise: Dance Dance Revolution. Zepeda is just one of many students at Rice who find their exercise, stress relief and mental agility in sports not found on traditional college rosters.

In order to practice their unconventional sport, Loren Young and Carter Walker, members of the Rice sailing team, leave campus almost every weekend. After driving for 35 minutes down to Clear Lake, Young and Walker practice sailing at the Lakewood Yacht Club for around five hours before stopping by the Seabrook Waffle Company for a snack with the rest of their team.

While Young and Walker are in Clear Lake, members of the equestrian team are in Fresno, where they take weekly lessons at the Southern Breeze Equestrian Center, according to team captain Celeste Biltz. This past weekend, the team hosted their own horse show there, inviting schools like Louisiana State University to compete.

“As the show hosts, we provide all the ingredients that make the show run: horses, judges, the location and volunteers to run the show,” Biltz, a Jones College senior, said. “We had about 70 riders from 10 different schools, which required us to organize about 30 horses and 40 volunteers.”

Lina Tiblier, a member of the equestrian team, said she finds riding physically and mentally difficult, but rewarding.

“Not only do you have to focus on your own movements, but you also are reading and analyzing the horse’s movements and making quick decisions on how to respond,” Tiblier, a Brown College sophomore, said. “I think the hardest but most rewarding thing about riding is finding the strength to overcome fear. No matter how many times you’ve fallen off or made mistakes, nothing beats the feeling of when you finally master a new skill — it’s incredibly empowering.”

“There’s a massive amount of tactics and strategy that go into racing, and one bad decision can often doom your race,” Walker, a Martel College senior, said.

Richard Appel, captain of the club fencing team, said he feels similarly about his sport. Fencing involves two players who duel with epees (needle-like swords), foils and sabers. Contact with an opponent sets off a sensor, which alerts the duelers when one of them is hit.

“So much of fencing is how you make a plan — learning, studying your opponent and making a plan to best fence against them,” Appel, a Lovett College senior, said. “So that’s something we focus on when we train, both aspects of that, the physical but also the mental.”

Zepeda (Sid Richardson College ’18 and a current graduate student),  said that DDR is also similar: a balance between physical ability and mental requirements. DDR, a music video game originally found in arcades, features platforms with arrows pointing forward, backward and to each side. Competitors must tap their feet in intricate patterns to match the arrows seen on screen, all while keeping with the rhythm of the music.

“It’s a great form of exercise, at least for cardio,” Zepeda said. “At the same time, you’re also listening to fun music that gets you up and moving … and if you ever reach that state of flow, which you can do really fast, it’s super great for stress relief. You just zone out and you just look at the screen and go.”

As president of Rice DDR, Zepeda plays DDR every Saturday with his club members in the Graduate Student Association lounge.

“It’s a rhythm game, so it uses your brain. But it’s exercise — it’s cardio. So it’s like the best of both worlds,” Claire Skinner said.

Sometimes, mental fortitude extends beyond the sport itself. Tiblier said that while people see riding as a glamorous hobby, many aspects of the sport are less appetizing than others.

“On a regular basis we are scooping poop, cleaning muddy horses and moving heavy jumps or poles. I have yet to leave the barn without being covered in at least one layer of dust,” Tiblier said. “The horses at our barn are really great, but accidents can happen. I think we’ve all at some point had toes stepped on or fingers nipped at.”

Within these unconventional sports, some students are pushing convention even further. Although fencing allows people of all genders to compete, Jeannie Lee said she and her roommate, Grace Wei, are in the minority — there are only a few women on the team.

Lee, who has fenced for six years and who qualified for USA Fencing’s Junior Olympic Championships while in high school, said that she will be the only woman competing at an upcoming fencing tournament. Lee said that the unequal gender distribution comes from inherent advantages that come with greater height and arm length.

“As a woman, you might feel like you’re more disadvantaged, but … it’s pretty cool how I can also show that women are capable of doing this sport,” Lee, a Baker College freshman, said.

“I’ve loved fencing, not because I’m good, but because I get to spend more time with [Jeannie],” Wei, a Baker freshman, said. “She’s taught me how to embrace my aggressive side.”

Wei is not alone as a newcomer to fencing — most of the team started fencing in college, according to Appel. He said that their team serves both as a practice space for experienced fencers and a training ground for new fencers. With that comes a responsibility to dismantle misconceptions and teach safe practices.

“A lot of people, when we say ‘fencing’ ... they kind of freak out, swords and all,” Appel said. “But it’s actually a very, very safe sport. We always say, in the Olympics, fencing actually has fewer injuries than badminton.”

Young said that many members of the sailing team are also introduced to the sport while at Rice. He said that while many people think sailing is hard, he’s been able to teach people how to sail in under an hour.

“It’s a tactical sport when we race as you need to know how to read the wind and where to position your boat to go the fastest, but those are skills you pick up the longer you sail; when we’re just lounging around, just have a good attitude and you’ll be able to vibe really well,” Young, a Martel College junior, said. “Because in the end you’re on a boat on a sunny day taking a mental break from homework, so relax and chill out.”

Zepeda said the opposite is true about DDR — while it’s easy to pick up, it takes a lot of practice to become good at it.

“You think it’s a weird sport, but it’s also a video game, so it’s the middle ground that anyone can come and have some fun, and even if it’s being laughed at by your friends — but I guarantee your friends won’t be able to do much better,” Zepeda said. “At the same time there’s a ridiculously high skill ceiling, so you can just do it for years and still have people better than you.”

Zepeda has also carved out his own space in the DDR world, which he and Claire Skinner say mostly exists online. The club plays the game through an open source program, which is run by fellow DDR enthusiasts. Zepeda’s contribution, standardizing the rating system for DDR dances, draws on his academic background — electrical and computer engineering.

“The difficulty rating system is wildly inconsistent,” Zepeda said. “I was like, let’s try to objectify the field a little bit. I made a program that essentially looks at the charts and tries to figure it out.”

Through their different sports, all of these athletes are figuring it out — practicing what they love with limited resources, space and time.

“[My favorite song to dance to] is called ‘99 Red Balloons,’” Claire Skinner said. “It was from the Wii version back in the day, so I played it when I was like 6 or something and I was really bad at it. But now, I can actually do it. I do it every week.”

“For me, as a Ph.D. student conducting research, I am always faced with failed experiments and unanswered questions,” Sevilla said. “This sport grants me something to look forward to at the end of a long work week.”

[2/7/2020 4:35 p.m.] This article was corrected to reflect the fact that Lee and Wei are not the only women on the fencing team and that the team fences with sabers and foils as well.