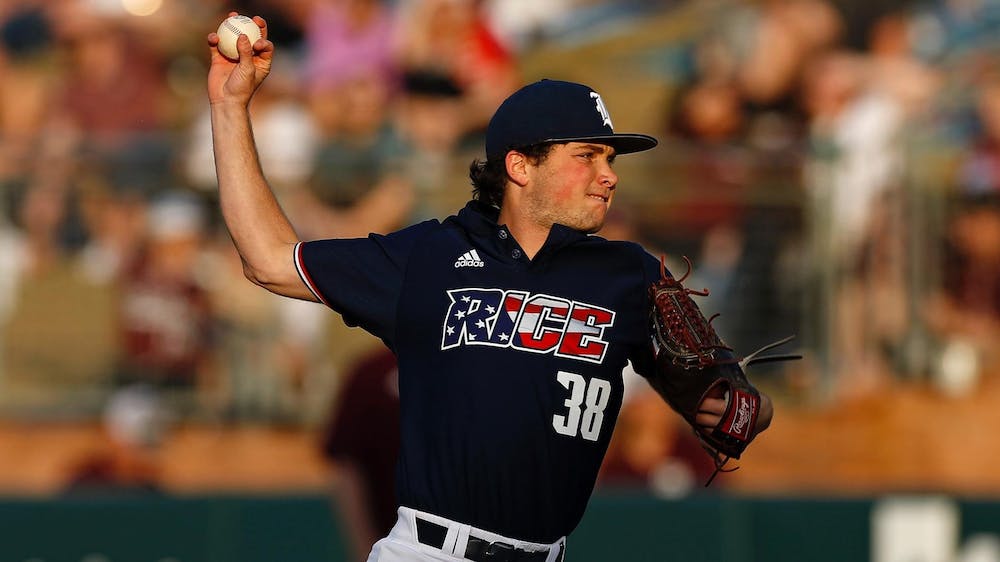 Before each Rice baseball home game this season, you can find junior pitcher Kel Bordwine playing ping pong at Baker College or dining at Raising Cane’s Chicken Fingers, where he always eats the same meal in a specific order. But once the game starts, you can expect to see Bordwine on the mound frequently, after he finished last season with a solid 3.69 ERA as opponents hit for a .258 average against him in nine starts.

Bordwine said he hopes to contribute to the team this season regardless if he starts or comes in from the bullpen.

“For myself, I hope to make it into the rotation,” Bordwine said. “I want to be a weekend guy, but obviously I want to fit in just somewhere and I want to just go out there and get outs. Whether it is a short-stint bullpen session a couple times a week or a long time in the bullpen, it really doesn’t matter to me.”

Last year, Bordwine achieved one of his best performances of the season during Rice’s annual three-game series against the University of Houston in a battle for the Silver Glove Trophy. As a result of only allowing three base hits in a combined 6.2 scoreless innings, Bordwine was selected as the Most Outstanding Player for the series.

According to Bordwine, defeating Houston was very satisfying.

“Just beating [UH] at all was super sweet,” Bordwine said.

Ever since he picked up a baseball and started playing T-ball at the age of four, Bordwine said he has consistently worked to improve his game. However, Bordwine said he realized in high school that he wanted to play Division I baseball.

“One day [in high school] I just decided I wanted to be good and I started throwing three bullpens a week and stayed after practice for two hours a day,” Bordwine said.

Going into this season, Bordwine said he has worked on two major components of his game in order to help solidify a spot in the starting rotation.

“Besides gaining velocity, I went back and added another pitch,” Bordwine said.

According to Bordwine, he added a slider to his pitch repertoire, which also consists of a fastball, changeup and curveball.

“Now, I put a lot of time and effort into getting a slider and being able to throw everything for a strike in all counts,” Bordwine said.

“[Bordwine] just shows up to the yard and does his work,” Bragga said. “He’s a leader.”

Bordwine has made major strides in his time at Rice, improving from only appearing in five games out of the bullpen in his first season to making 17 total appearances in his sophomore year with a 4.37 ERA. According to Bordwine, his pregame rituals and locker room habits deserve some credit for his success.

“I’m very superstitious,” Bordwine said. “I wear the same clothes to bed the night before [each game] and then I eat Cane’s [before each game] in a certain order. I [also] love to play ping pong. [The] locker room champ is Trei [Cruz], but I’m second.”

According to Bordwine, the expectations for Rice are high going into this season.

“I think the sky’s the limit for us,” Bordwine said. “I think we are going to win Conference USA outright, but then obviously we want to win the tournament.”