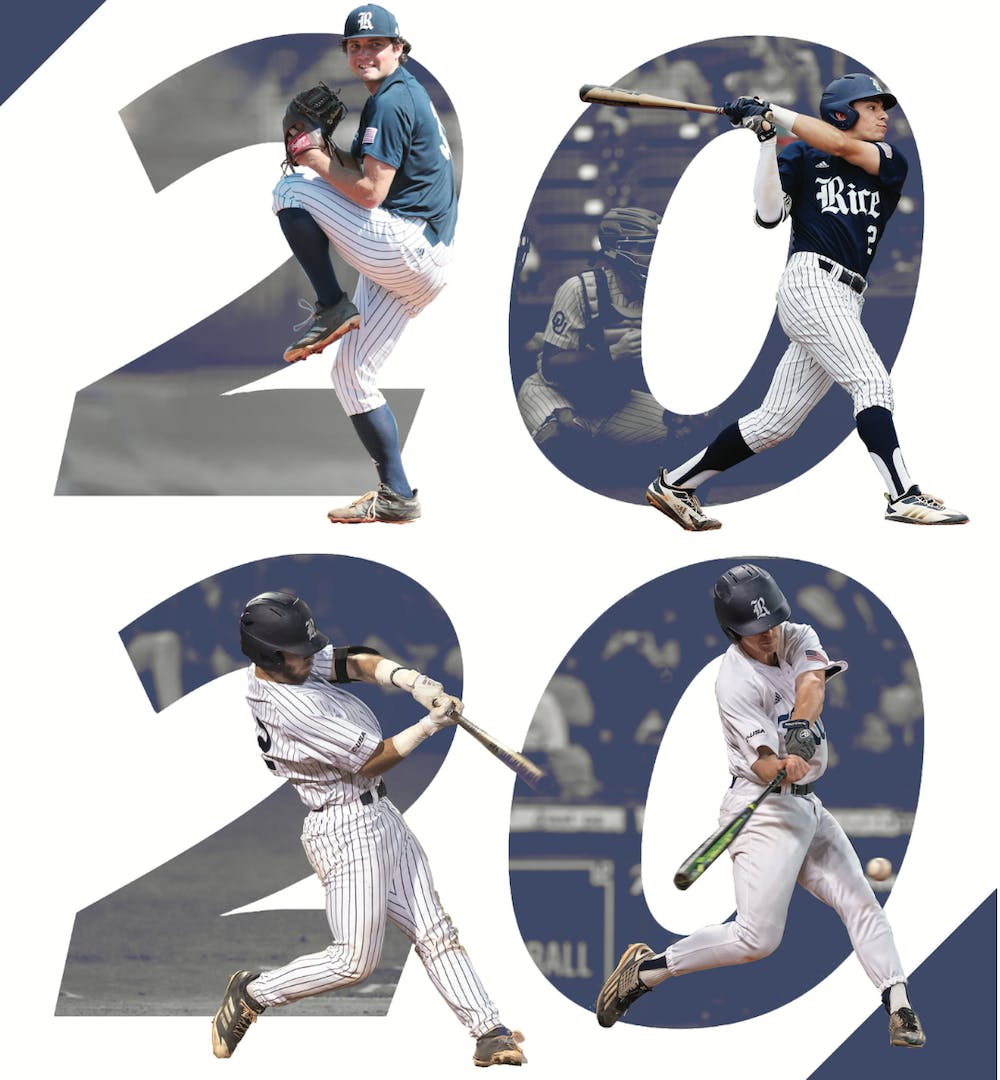 Last year marked a brave new step into an uncharted world for the Rice baseball team. After 27 years, 23 NCAA Tournament appearances and one national championship all under the steady stewardship of Wayne Graham, Rice opted to part ways with the only coach they’d ever achieved success under. But 2018, Graham’s final season, was a far cry from the sustained success that characterized his tenure as Rice’s head coach. The Owls struggled to a 26-31-2 finish, missing the NCAA Tournament for the first time since 1994.

Enter head coach Matt Bragga. Fresh off a 52-10 season piloting the controls at Tennessee Tech University, Bragga arrived at Rice with experience, exuberance and confidence that the Owls were going to turn things around.

So, how did Rice do in 2019? Well, the Owls struggled to a 26-33 record, missing the NCAA Tournament for the second time in two years. Rather than getting better, one could argue that Rice got even worse.

The Owls’ shakiness in 2019 was evident right out of the gates. Though Rice took two out of three games in its season-opening series against the University of Rhode Island, the Owls’ offense was already starting to exhibit the inconsistency that would plague them throughout the season, scoring only one run in the first game and 15 two days later. Their defense was also skittish, committing seven errors.

According to senior third baseman Braden Comeaux, the team never really got on track last season.

“We never really meshed together as a team,” Comeaux said. “We never really had that moment where we were all clicking on all cylinders and doing everything right at the right time.”

Though Rice’s pitching had strong moments, it continually struggled to close out the end of games. The Owls lost nine games after leading in the eighth inning or later, including all three games of their series against Marshall University to close the regular season.

According to senior second baseman Cade Edwards, Rice must improve in late-game situations to make a leap this season.

“We were ahead in a lot of games late in the game that we ended up losing,” Edwards said. “And that’ll change a whole season from success to failure. That’s probably, looking back, the toughest thing we didn’t do right last year which we’re hoping to correct this year.”

Rice’s lineup depth was another major issue. The top of the order was strong, with five starters hitting over .290: Edwards, Comeaux, current junior shortstop Trei Cruz, current senior outfielder Bradley Gneiting and then-senior designated hitter Andrew Dunlap. However, the rest of Rice’s batters posted a dismal .209 combined batting average, failing to provide the offensive spark necessary to support the top of the lineup. But Bragga said one of the Owls’ major weaknesses last year could become an asset this season.

“We actually have some [depth this season], so that’s a good thing,” Bragga said. “I think that actually could be one of our strengths this year. The dropoff in production should be very minimal from top to bottom in the order. It wouldn’t shock me if our seven or eight-hole hitter hit higher than our [five-hole or two-hole hitter].”

This year, Rice brings back four of the five aforementioned .290 hitters, losing only Dunlap to graduation. To help replace his production, and resolve the depth issues from last year, the Owls have added some fresh faces to the offense this year. Junior designated hitter Brayden Combs, junior first baseman Austin Bulman and junior infielder Daniel Hernandez all arrive at Rice as junior college transfers, and catcher/outfielder Tyler LaRue, catcher Cullen Hannigan and infielder Cristian Cienfuegos join the team as true freshmen. Combs, Bulman and LaRue are expected to slot into the opening-day lineup.

According to Edwards, the Owls’ offense should be improved from last year.

“We did lose a guy in Andrew Dunlap who was very pivotal to our offensive success last year,” Edwards said. “But we’ve got plenty of [new] guys to fill in those gaps that we may have lost last year … We’ve gained more than we’ve lost, I think.”

The Owls’ top-end starting pitching was a bright spot for last year’s team. Then-junior Matt Canterino and then-senior Evan Kravetz combined for a 3.00 ERA and 229 strikeouts in 180 innings. But Rice lost both pitchers in the 2019 MLB Draft. According to Bragga, filling their roles will be tough.

“It’s going to be difficult; [they’re] hard to replace,” Bragga said. “[But] we’ve got what I feel is a pretty good core in terms of guys that are gonna get out there and perform.”

According to Bragga, junior Alex DeLeon, a transfer from McLennan Community College, is poised to be Rice’s number one starter this year. Junior Kel Bordwine, who made nine starts last season, will most likely feature in the rotation as well. Bragga said the starting pitching after DeLeon isn’t set yet, though the Owls have several pitchers poised to make a leap this year.

“[Sophomore] Blake Brogdon right now has taken a huge step forward; his stuff has been electric so far this spring,” Bragga said. “[Sophomore] Brandon Deskins is another one: a left-handed pitcher that’s made a huge jump from last year.”

Sophomore Dalton Wood, a key bullpen cog from last year’s team, could compete for rotation time after recovering from his current injury. One other name to keep an eye on is senior Roel Garcia, who was a regular in the Owls’ rotation two years ago but missed all of last season after undergoing Tommy John surgery. Bragga said Garcia’s talent is undeniable.

“Stuff-wise, he’s elite; I mean, it’s first-round talent,” Bragga said. “[And] what we’ve seen [from] him coming back from surgery so far this spring has been just remarkable. So we’re excited to see what he can do.”

According to DeLeon, the Owls’ coaches have focused on pitch location and getting ahead in the count during offseason practices.

“[Assistant coach Cory Barton] is having us really work on locating fastballs, more specifically early in the count so you can get ahead,” DeLeon said. “After the first couple fastballs you can work off whatever you want; you control their at-bat rather than falling behind to the hitter.”

To help with both hitting and pitching, the Owls invested heavily in technology during the offseason. This year, Rice has installed a virtual reality headset in the visitors’ locker room that allows Owl hitters to visualize themselves at the plate against opposing pitchers. Bragga said the VR headset will be hugely beneficial to Rice’s scouting.

“[If] we’re going to play [the University of Texas, Austin], you can face Texas’s Friday night guy,” Bragga said. “[You can work on] getting his release point, being able to recognize pitches, [working] on your two-strike hitting, all those different concepts.”

Rice has also installed new hitting analytics technology in its batting cages. According to Edwards, it allows Rice’s batters to glean new insights into their approach at the plate.

“You can hit off the tee, live [batting practice], off the machine, or whatever, and [the new system] tells you distance, launch angle, exit [velocity], all that kind of stuff,” Edwards said. “It gives you instant feedback: you turn around, look at the screen, and you can make adjustments from there.”

Bragga said that Rice has also installed new technology to assist pitchers that measures spin rate, velocity and pitch location. But according to Comeaux, Rice has achieved more than refinements to hitting and pitching approaches during this past offseason.

“Honestly, this season I think we’ve meshed and have more team chemistry I’ve played on since I’ve been at Rice,” Comeaux said. “This year we’re a lot closer; all of us are really good friends. We just have a bunch of determined, hardworking people on our team this year. We all have the same common goal, the same mindset that we’re just going to take it one game at a time and do the best we can.”