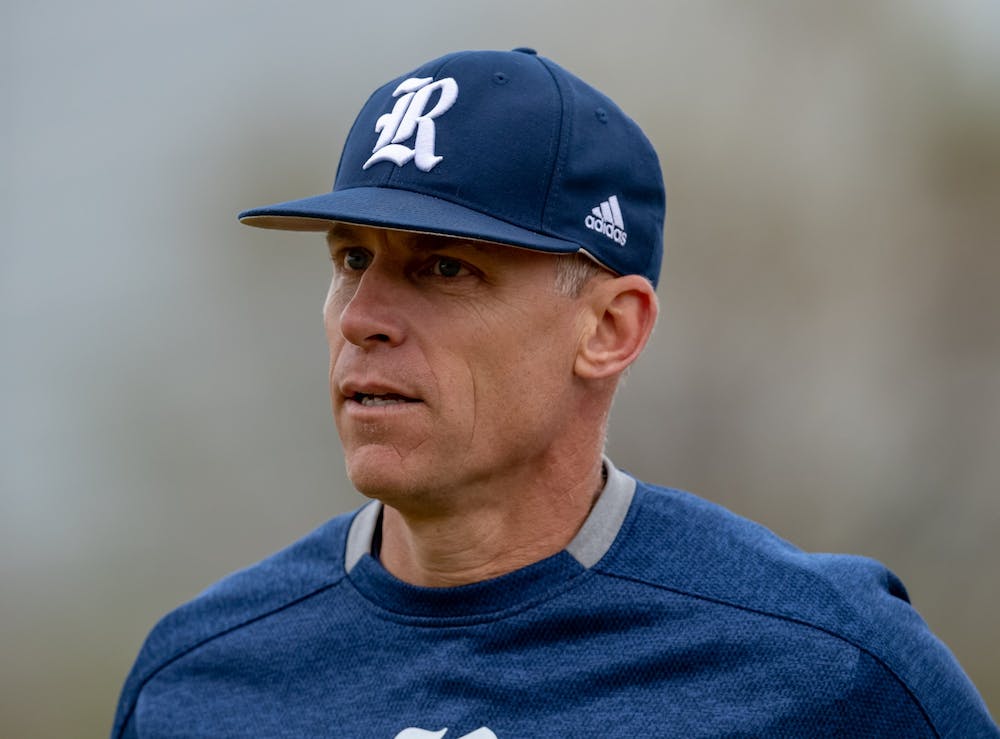 In the fall of 2018, Rice Athletics faced a difficult task: hiring a new baseball head coach in the stead of the legendary Wayne Graham. Rice ultimately selected Matt Bragga, formerly the coach of Tennessee Tech University, as its new head coach.

Last season, in his first year at Rice’s helm, Bragga managed a team which limped to a 26-33 finish. This year, Bragga will attempt to right the ship, starting the season with what Bragga said is an especially formidable nonconference schedule.

Bragga said he still feels hopeful about the team’s chances in the upcoming season.

“It’s a challenging nonconference schedule, there’s no doubt about it,” Bragga said. “But I think that’s why guys come to Rice. They want to play good opponents, to play good baseball. If [we] go out and play good in all facets of the game, we’ll have a chance to win all those games.”

“People always overrate [me not formerly recruiting in Texas], Bragga said. “[They say], ‘Oh wow, you’ve never been in Texas in recruiting.’ All you gotta do is get to know people. And that’s what we do. That’s our job. That’s the lifeline of our program. If you can’t recruit, you’re not gonna win.”

Bragga said he has gotten to know all the players on the team, especially junior shortstop Trei Cruz. According to Bragga, Cruz is a great leader both by example and by communication.

According to Bragga, one potential area of concern for the team this season is pitching. After last season, Rice lost the bulk of its innings pitched; former pitching stalwarts such as Matt Canterino, Evan Kravetz and Garrett Gayle were selected in the 2019 MLB draft. Now, Bragga said, Rice must find additional replacements for many excellent pitchers who graduated, including Jackson Parthasarathy and Kendal Jefferies.

Last year, Bragga said he did not know every Rice player, so he relied upon the Owls’ leaders to communicate with other players on the team. However, Bragga said he has worked hard to coach more players individually since last season. As a result, the Owls’ preparation this fall outshone their work done the prior year, according to Bragga.

“This fall was good because last year, I was new to everyone, and they were new to me,” Bragga said. “This year, we have a lot of returners on this team. So, you don’t feel like as a coach that you are starting over from ground zero. [I’m] not. Like, when we go over bunt defenses, the guys already know. When we go over cuts and relays, they already know them. The fall was really easy — easy is the wrong word [because] we worked really hard — but easier because of the experience our guys have within our system right now.”

Once the team has advanced past its difficult non-conference schedule, Bragga said Rice needs to show up against conference opponents to enhance the pedigree of Conference USA.

“We have a good league,” Bragga said. “I’ve always respected Conference USA. Florida Atlantic [University has] done really well now for a while. This league needs Rice back. In order for Conference USA to be the perennial powerhouse baseball conference that it can be, Rice baseball has to be a factor. And that’s good; I like that. I think that’s important. And we’re going to be. But there are some really high quality opponents in this league.”