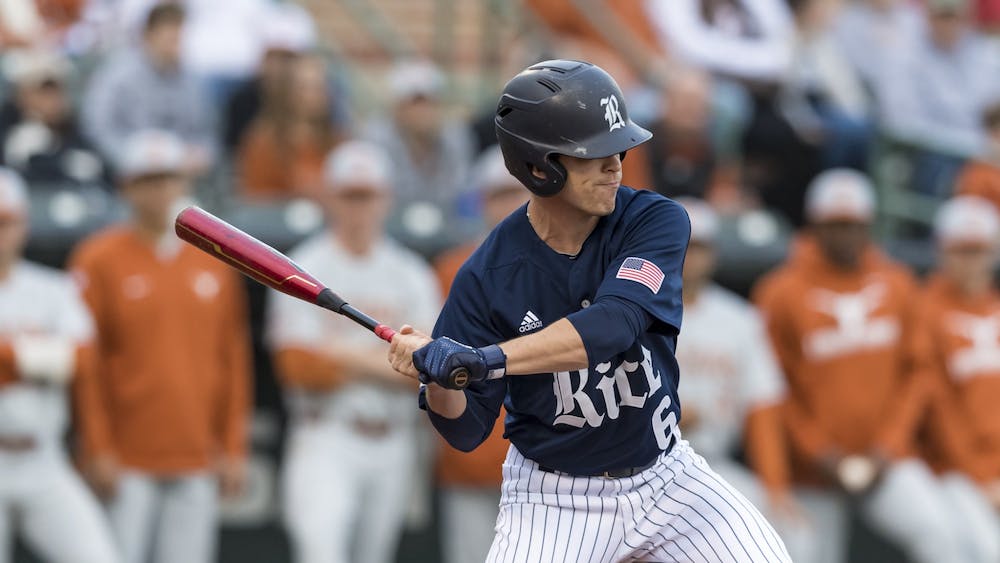 Some players might not be old enough to remember it, but when the Rice baseball team faces Missouri State University for a three-game series this weekend, it will serve as a rematch of the first game in the 2003 College World Series. For Rice, that game — an Owls win — sparked a run that culminated in the first and only College World Series title in program history. For Missouri State, that game represented the closest that the Bears have ever been to a College World Series title. Seventeen years later, both teams find themselves in similar situations, looking to get back to their 2003 heights.

The Owls experienced a tough six-game losing streak to start the season, in which the team lost three games at home against the University of Texas, Austin and three games on the road against the University of California, Irvine. Now, at 0-6, Rice is looking to rebound against a MO State team which is, according to Rice head coach Matt Bragga, a perennial power in the Missouri Valley Conference. Bragga said Rice knew it would be tested to begin the season, which started on Feb. 14.

“These [were] two really good teams,” Bragga said. “We knew [the beginning of the season] was gonna be a challenge, and it certainly has been. We haven’t been able to get over the hump.”

According to junior shortstop Trei Cruz, it’s only a matter of time before the team hits its stride.

“I feel good with where we’re at, and where we’re going,” Cruz said after Sunday’s game, a 9-4 loss to UC Irvine. “The biggest thing is that we need to get offense going. I think we have a lot of very talented hitters on our team and they just haven’t found it yet, myself included, and I think today, we showed a little bit of life with the bats. I think today was a good step forward and I’m excited for this week.”

Rice got some help in the form of senior pitcher Roel Garcia, who returned from injury this past week. He threw two innings on Friday night against the Anteaters, striking out two. Garcia’s return could prove crucial against Missouri State, as his next outing is most likely to come against the Bears on Friday. Bragga said his return was an “energy boost” for the team.

Garcia said it was great to be back on the field.

“[Pitching again was] absolutely incredibly amazing,” Garcia said. “I was honestly speechless. It had been over a year and a half that I hadn’t pitched ... The feeling of playing baseball and having fun again was the absolute best feeling in the world for me.”

According to Bragga, Rice and MO State are currently in similar positions. Like Rice, the Bears are also looking to bounce back from an uncharacteristic losing season. Under head coach Keith Guttin, they have enjoyed 10 conference championships over a span of 37 years, in a run reminiscent of Rice’s under longtime head coach Wayne Graham. However, just as the Owls are coming off of back-to-back losing seasons for the first time in decades, Missouri State is looking to rebound from a year that saw the most losses in program history.

Bragga said remaining confident will be the key to getting Rice’s season back on track.

“When you’re 0-6 it becomes a little bit of a confidence thing,” Bragga said, “It’s easy to begin to doubt. We have to guard from that because if we allow that [doubt] to creep in, then you end up losing games that you shouldn’t lose. I think one of the keys to this week’s game is just gonna be can we make sure our guys are staying confident.”

According to Garcia, Bragga’s message to the team largely echoed the same sentiments about confidence.

Only six games into the season, the Owls still have plenty of time to right the ship. According to Bragga, there’s reason to believe that they’ll do just that.

“It’s been a challenging schedule, we’re off to a tough start, but I still believe in these guys and I think there’s a great future to this season ahead,” Bragga said.

Rice faces Texas State University in a single-game away matchup on Wednesday, before hosting Missouri State at Reckling Park for a three-game series over the weekend.