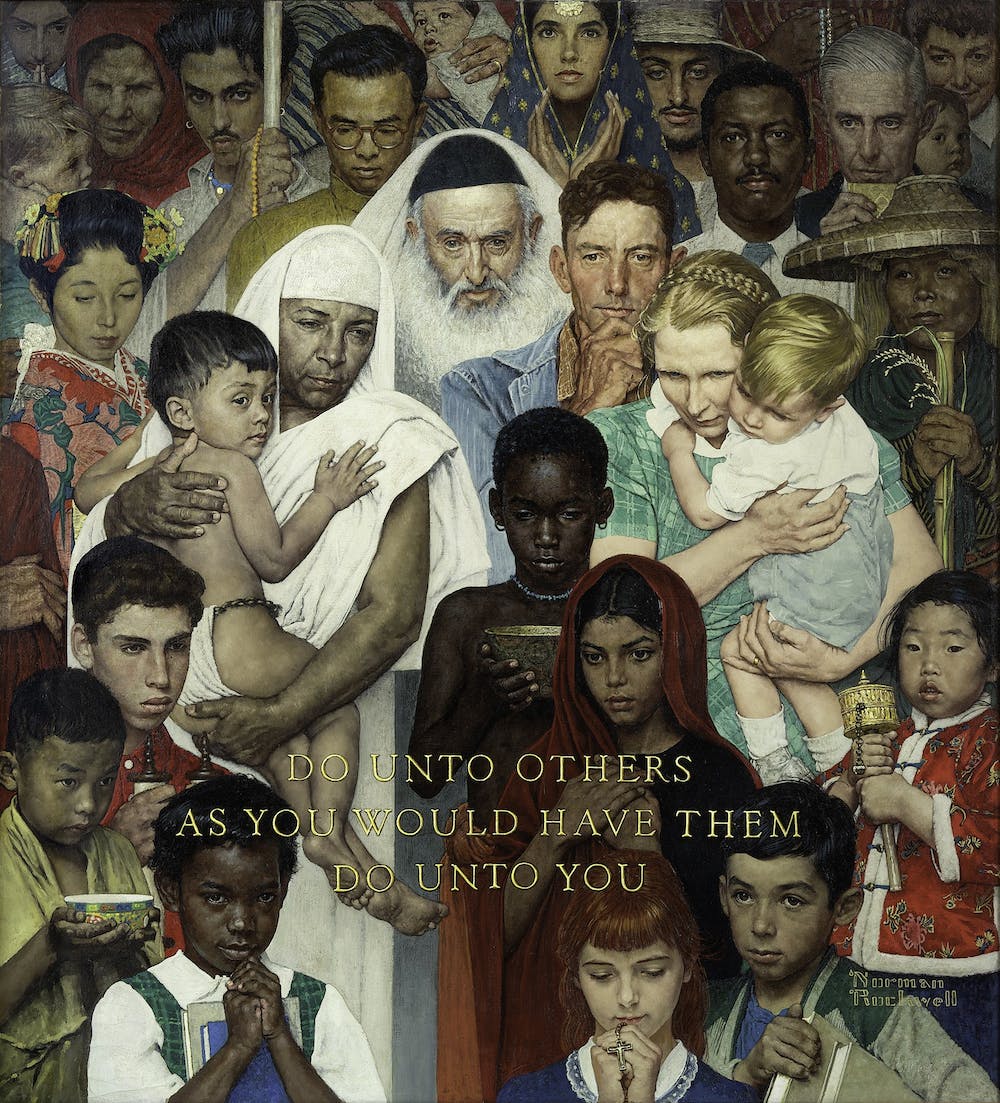 The Museum of Fine Arts, Houston tells the story of how Norman Rockwell’s iconic depictions of President Franklin D. Roosevelt’s Four Freedoms — freedom of speech, freedom of worship, freedom from fear and freedom from want — changed American society forever with “Norman Rockwell: American Freedom.” The exhibit opened at the MFAH last month as the fifth stop on the acclaimed exhibition’s nationwide tour, organized by the Norman Rockwell Museum.

Kaylin Weber, MFAH’s associate curator of American painting and sculpture, explained during a press preview event that the MFAH chose the name in an effort to capture a broader image of the national culture in which Rockwell’s work served: not only as the foundation for contemporary Americana, but also the springboard for ideas about freedom that would continually evolve and sprawl into new corners of American consciousness.

Before FDR spoke the Four Freedoms into existence in his 1941 State of the Union speech, Rockwell was capturing the emblematic aspects of American culture. The exhibit opens with a gallery devoted to Rockwell’s cover illustrations for the Saturday Evening Post where he worked for nearly 50 years. Beginning in 1916, Rockwell was able to extract slices of life from the world around him and distill them so vividly that the Post earned millions of subscribers across the nation. Saturday Evening Post readers adored Rockwell’s talent for transforming the most mundane moments of life into romantic testaments to American life in the 1930s. The illustrator captured the small comforts and joys of Americans despite straining under the weight of the Great Depression.

Rockwell’s talent for suspending a single moment in time is evident in the meticulous details in his illustrations. Covers like “Family Home from Vacation” offer something of a scavenger hunt to the eye, inviting viewers to explore tiny morsels of life seemingly strewn about by Rockwell’s fictional subjects wilted flowers, a deflated balloon, a shirt peeking out of an overly full suitcase and a frog prying itself out of a child’s box all adorn the exhausted family, giving the illusion that they lived a life before they came to rest on Rockwell’s canvas.

While works such as “Norman Rockwell Visits a Ration Board” were heralded for the variety of life he captured, they are noticeably whitewashed images of an idealized, conservative American society. According to Weber, who led the exhibit tour, the Saturday Evening Post did not allow people of color to be depicted in illustrations unless they were in positions of service, an appalling sign of the times. Rockwell remained with the magazine until 1963 and unfortunately kept his artistic lens largely restricted to White Americans for the first major half of his career. As evidenced by his later works which depict significantly more inclusion and diversity, Rockwell’s artistic attitude toward race relations seemingly evolved in a fashion on par with the rapid societal changes of the era.

As one moves through the first room of Rockwell’s magazine illustrations into the second gallery space, the rosy optimism drains from the walls as the exhibit shifts its attention away from the comforts of domestic life to the hardships of World War II. Rockwell largely avoided illustrating war violence, so this portion of the exhibit is mostly populated by other artists of the 1940s. By including official World War II photography from the U.S. Armed Forces and works such as Margaret Burke-White’s globally recognized photograph of Holocaust survivors, “The Day After Liberation, Buchenwald, Germany,” the exhibit allows Rockwell himself to momentarily fade into the background and focus on the world around him which was dramatically changing every day.

This act of zooming out from Rockwell and including work from a range of artists engaged with wartime themes and the principles of Roosevelt’s Four Freedoms speech is a significant strength of the exhibit. Visitors have the opportunity to see the work of Rockwell’s contemporaries such as graphic artist J. Howard Miller, who coined Rosie the Riveter in his iconic painting “We Can Do It!” which hangs amid other 1950s graphic art and labor propaganda. The MFAH capitalizes on their vast gallery space and builds a comprehensive glimpse at not just the work of Rockwell, but also the world he was living in and drew inspiration from.

Even with the vast collection of accompanying artists, Rockwell’s Four Freedoms undoubtedly remain the focal point of the exhibit. The poster illustrations are massive, welcoming visitors to spend more time with the iconic images than likely ever before. Each scene fosters a sort of calm, their colors subdued yet rich and their details soft yet striking. In “Freedom from Fear,” Rockwell paints a warm light that pours into the stairwell behind the family, seemingly emanating from downstairs. As in his earlier magazine illustrations, Rockwell’s trademark talent for suggesting that life continues beyond the canvas is evident in his most prolific works.

The final portion of the exhibition showcases Rockwell’s artistic foray into the theme of civil rights and the postwar legacy of the Four Freedoms, introduced by another of Rockwell’s most recognizable creations, “The Problem We All Live With.”

This portrait marked the end of Rockwell’s employment with the Saturday Evening Post and the beginning of his time with Look magazine. From 1963 forward, Rockwell’s work shifted to include many more people of color, rejuvenating and expanding upon his passion for capturing the variety of life. In a departure from his earlier work, Rockwell began to illustrate graphic violence in order to convey the severity of racial discrimination during the civil rights era with works such as “Murder in Mississippi.” “Blood Brothers” was one such work, an illustration depicting a Black man and a White man lying dead side by side that Look ultimately refused to publish. Weber made a point of explaining that the politics of what was published and wasn’t says equally about American culture of the time as the paintings themselves.

Rockwell not only forayed into American civil rights but also sought to represent an American perspective of a world forever changed by massive destruction and on the doorstep of globalization. According to Weber, Rockwell was enamored with the idea of the United Nations, which he hoped would rally people around the goal of avoiding future warfare. An unpublished study illustration titled “United Nations” shows people from a wide range of cultures gathered behind world leaders. Many of the personas created for that study were transferred over to Rockwell’s cover illustration, “Golden Rule.” Rather than depicting the world’s cultures at the foot of the United Nations negotiating table, Rockwell ultimately rallied the vibrantly colored crowd around the universally recognized principle written in gold: “Do unto others what you would have them do unto you.”

The inclusion of Rockwell’s rough sketches, studies and unpublished work is the other significant strength of the exhibit. By offering visitors a glimpse at the inner workings of Rockwell’s creative process, the exhibit reminds viewers that revision and rejection is inevitable for even the most prolific artists.

The turbulent times of Rockwell’s career are captured through a variety of illustrations, photographs and artifacts that immortalize a culture in dramatic flux. “Norman Rockwell: American Freedom” captures not only the artist, but his world and mind. This act fosters an appreciation of Rockwell that doesn’t stem from his titular reputation, but rather for his ability to listen to the riotous noise of a tumultuous and violent world, and congregate an ever changing society around its most fundamental beliefs by stilling the transience of life, if only for a moment.

“Norman Rockwell: American Freedom” will be on view at the MFAH in the Audrey Jones Beck Building until March 22.