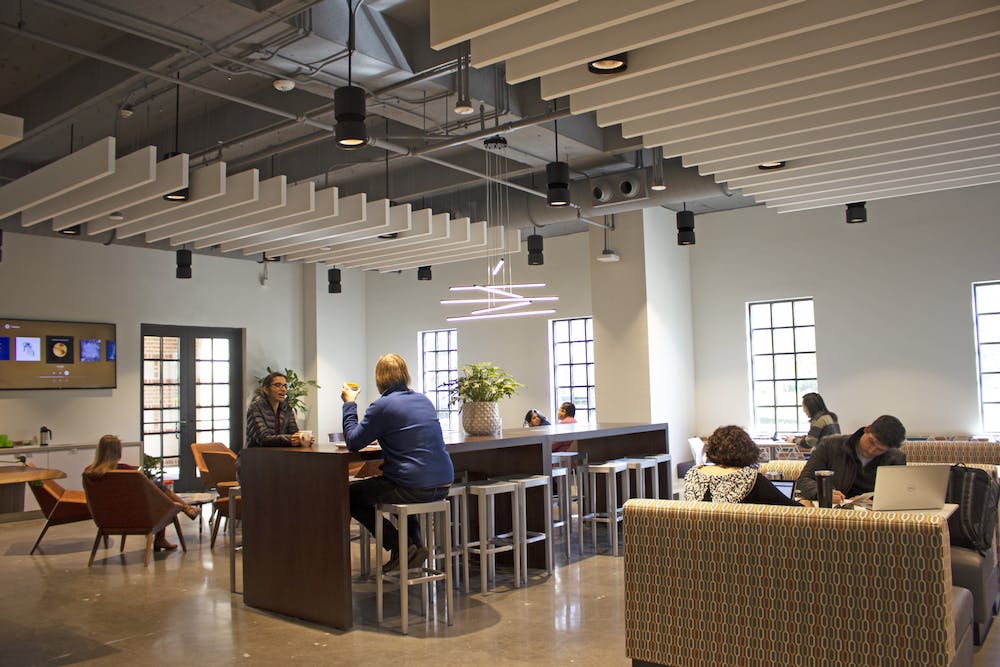 Highly anticipated campus coffee shop Audrey’s officially opened on the first day of spring semester classes last week after permitting issues delayed its initial September launch date. Despite the buzz surrounding Houston coffee guru David Buehrer’s newest venture, one look at the shop’s crowd suggests that few undergraduates are aware that Audrey’s is already open or even where it is. It’s pricier than other on-campus alternatives but still worth visiting — they have a few stellar options that can’t be found at Rice Coffeehouse, FLO Paris or East-West Tea.

Audrey’s is located in McNair Hall, home to the Jones Graduate School of Business, but I had to ask several people in the building before finding someone who knew where Audrey’s was. The shop is tucked away in a corner of McNair that overlooks the James Turrell Skyspace quad and has an outdoor entrance convenient to people coming from the South Colleges.

I went with Martel College senior Tori Joshi, who mentioned the business seemed out of place in the Jones School. It’s a quiet, open, echoing space populated mostly by graduate students or professionals, a clientele consistent with the rest of the building. Its floor-to-ceiling windows offer scenic views of the Jones School courtyard and let in plenty of bright, natural light to complement the shop’s pristine white walls and potted broad-leaved plants. It’s a chic space for business types, so undergrads might feel odd wearing shorts and oversized College Night shirts here. However, it’s the perfect place to come on a good hair day or for the experience of an aesthetic coffee shop like Honey Art Cafe without having to leave campus. The shop seats about as many as Chaüs but only had a smattering of patrons the two times I visited.

Aesthetics aside; you really come here for caffeine. And unlike at Chaüs, it feels impolite to come here to study without buying something. The drink menu has the standard coffees at noticeably higher prices than Chaüs. For example, almond and oat milk substitutions are 50 and 75 cents extra respectively, whereas Chaüs has more milk substitutes available and at no extra cost. Although the food menu appears to offer a variety of breakfast foods, only a few of the displayed items such as breakfast tacos are currently available. The rest of the menu is only a list of what this location hopes to sell eventually,according to the employee who took my order. The same employee told me they don’t accept Tetra as payment yet, but are open to considering that option down the road.

On the wall, I discovered something I never knew I wanted: a large screen shows what music is currently playing on the “Audrey’s January” Spotify playlist, along with the previous and upcoming songs. Chaüs employees play their own playlists while on shift, and all too often I ask a Keeper of Coffee at the bar what song they’re playing. But while Chaüs’s songs seem personal to KOCs, the title “Audrey’s January” indicates a manufactured playlist that doesn’t feel personal or tailored to the moment.

I asked Christian Owens, general manager of student-run business The Hoot, whether it was good that another outside business had gotten a foothold on campus.

“It’s a lot [of] work on the university’s side to maintain — let alone establish — an SRB,” Owens, a Martel College junior, said. “I could certainly understand why they would want a professional company as an option, especially in a place like McNair Hall where much of the traffic is grad students who want some different options — especially during the day.”

Joshi remarked when she came with me that she liked the decor, and the modern, classy nature of the place. The space contains mostly table seating, which is a plus over Chaüs’s couches.

“I wasn’t expected to find a place so big in the Jones School for a traditional coffee shop... it[’s] a good place to get work done,” Joshi said. “It’s nice to have two coffee shops with vibes that are so different from each other. As someone who’s always looking for places to study on campus, this’ll probably be added to my shortlist.”