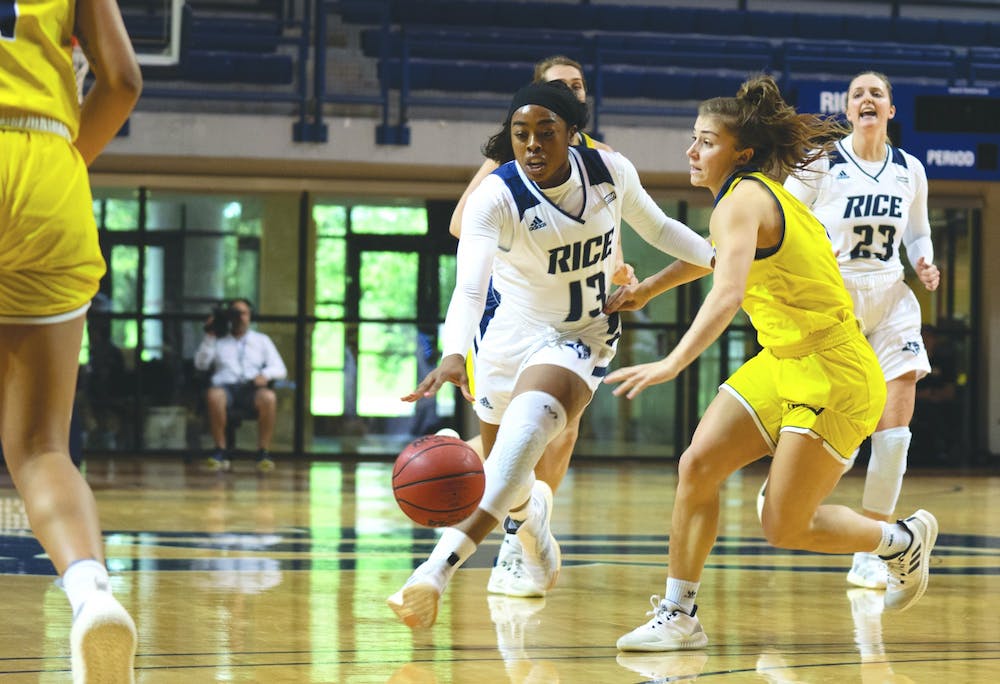 The Rice women’s basketball team earned a 71-57 win over Northern Arizona University  on Saturday at Tudor Fieldhouse. By defeating the Lumberjacks, the Owls now hold  a 4-3 season record. The win is the second in the row for the team after last Wednesday’s impressive 31 point victory over McNeese State University.

NAU entered the game with a 2-3 record, but stifled Rice’s offense early in the contest;  Rice scored only four points during the last five and a half minutes of the first quarter. Senior guard Erica Ogwumike, who was the team’s leading scorer in the game  at 26 points,  provided Rice a spark in the first quarter by scoring six points and recording a chase down block on an NAU fast break. However, the rapid pace of the period forced the Owls to make mistakes: Rice racked up three team fouls and eight turnovers in the first quarter alone. Fortunately, through the adversity the team faced from the start, panic never became apparent amongst any of the Owls’ players or coaching staff. At the end of the first quarter,  NAU edged Rice by one point, 14-13.

Sophomore guard Jasmine Smith gave Rice a boost of energy early in the second quarter when she took a charge against an NAU player that was barrelling the lane. After Smith put her body on the line, the Rice bench erupted; but the Lumberjacks silenced the Owls’ excitement by jumping out to a 7 point lead in the first five minutes of the second quarter. NAU went on a 6-0 run from the fifth minute mark to the third minute mark, spreading their lead to eleven points. The Lumberjacks held onto their lead for the rest of the half, closing it out with a 33-22 advantage.

Despite the deficit, Rice remained calm.  In the Owls’ first possession of the second half, Smith fought hard for an offensive rebound, was fouled and converted two free throws for her team. Smith’s tenacity was felt throughout the game and provided kindling to Rice’s offensive fire in the third quarter. On the next play down, freshman guard Lauren Schwartz sliced through the defense and scored through contact. Hustle was the name of the game for the third quarter: the team collected four offensive boards, fought for nine defensive rebounds and forced the Lumberjacks to commit 4 turnovers. The Owls jumped ahead to a 46- 44 lead at the end of the third quarter.

When the fourth quarter rolled around, the Rice fight could be felt on the floor. The Owls were confident after closing the 11 point deficit they had faced at halftime, and were ready to win. The quarter began with key contributions from freshman guard Destiny Jackson, who made a shot and snagged two defensive rebounds, an assist and a steal within the first four minutes of the quarter. Jackson’s effort set the tone for the rest of her teammates. For a five minute stretch in the middle of the quarter, the Owls went on a 10-0 run. After jumping out to a 12 point lead with two minutes left in the game, Rice had secured the win.

The Owls will face 2-3 Texas Southern University at H&PE Arena on December 7 at 12 p.m. The Owls look to improve to 5-3 with a win against their cross town rival.