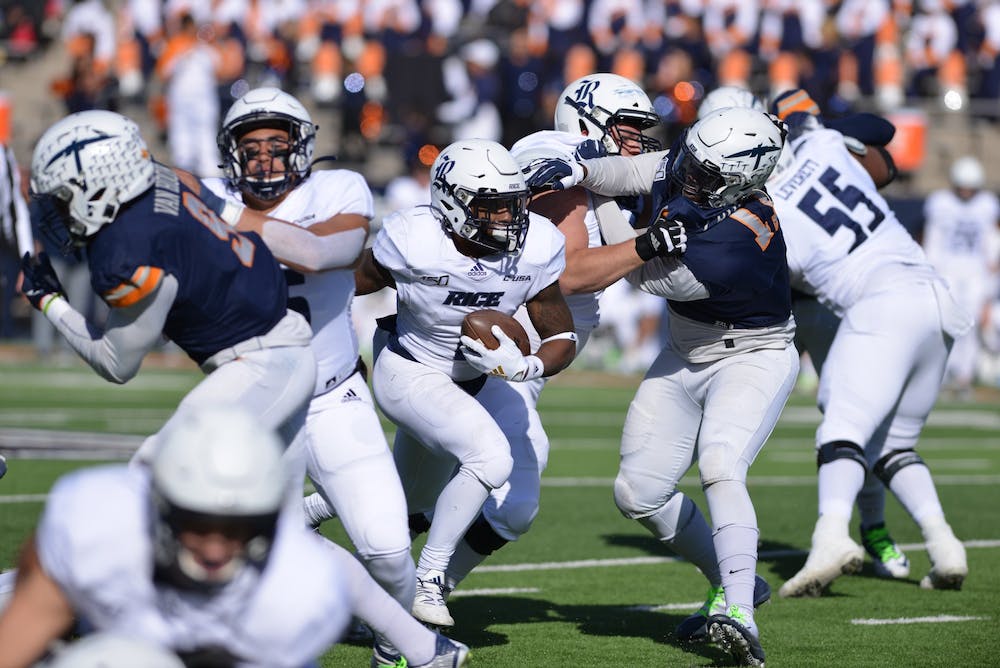 In the season finale, Rice football defeated the University of Texas, El Paso 30-16, outscoring the Miners 16-0 in the second half en route to their third consecutive victory on Saturday. The victory in Rice’s season finale improved the Owls’ final record to 3-9, a one-win increase over last year’s total and tied for Rice’s best finish since 2016.

The Owls started the 2019 season 0-4 with a challenging out-of-conference schedule.  Rice dropped close contests against the Army Black Knights and No. 8 Baylor University before getting blown out by both Wake Forest University and the University of Texas. Though Rice’s offense struggled to gain traction, the defense shone against Army and Baylor, holding the two offenses to a combined 35 points. After the loss to Baylor, head coach Mike Bloomgren said he was optimistic about the team’s season.

“I think [our play against top teams], the caliber of those teams really showed us where we are as a program and where we want to be and that’s really exciting,” Bloomgren said in a Sept. 24 press conference. “The team’s goals are very clear. We want to win the conference. That conference trophy is at the very top.”

But Bloomgren’s goals were not borne out. Rice’s offense continued to struggle and the Owls lost their first five games against Conference USA opponents, twice failing to top 10 points. Close, frustrating losses to Louisiana Tech University and the University of Texas, San Antonio offered Rice no respite. After a 20-6 defeat at the hands of Southern Mississippi University, Bloomgren said he was disappointed with the team’s offense.

“The offense: it’s not good enough,” Bloomgren said in an Oct. 29 press conference. “Not even close. We’re still having problems protecting the ball. It’s really frustrating. I feel bad for the rest of our team that the offense is playing that way.”

Though Bloomgren’s words were harsh, they had merit. Through this weekend’s games, Rice’s offense ranks No. 125 in yards gained and No. 123 in points scored per game: among the nation’s worst performers. Any way you slice it, Rice’s offense has been bad. The Owls were No. 110 in rushing yards, No. 118 in passing yards, No. 118 in total first downs and No. 116 in fumbles lost.

But Rice (and its offense) rebounded in its last three games of the season. Against Middle Tennessee State University, Rice scored 31 points in the first half, holding on for the victory despite going scoreless in the final two periods. The Owls repeated their high-wire act  the next week against North Texas University, jumping out to a 20-0 halftime lead before again squeezing out the victory despite going scoreless in the second half.

Saturday’s performance against UTEP was the offense’s most balanced scoring output of the season: the Owls scored 14 in the first half and 16 in the second. Rice’s running game led the way, with graduate running back Aston Walter and freshman quarterback Jovoni Johnson combining for 211 yards on the ground and three touchdowns. According to Bloomgren, the season ended on a high note.

“[This team] made a decision to win their last three games, and to do everything they could for each other to ensure that happened,” Bloomgren said on Saturday. “Today is the culmination of that. It’s the culmination of our 2019 season, and it’s the start of something really cool too.”

Next year, Rice will look to build on its end-of-season momentum to bolster its offensive firepower as the Owls attempt to make their first bowl game since 2014.