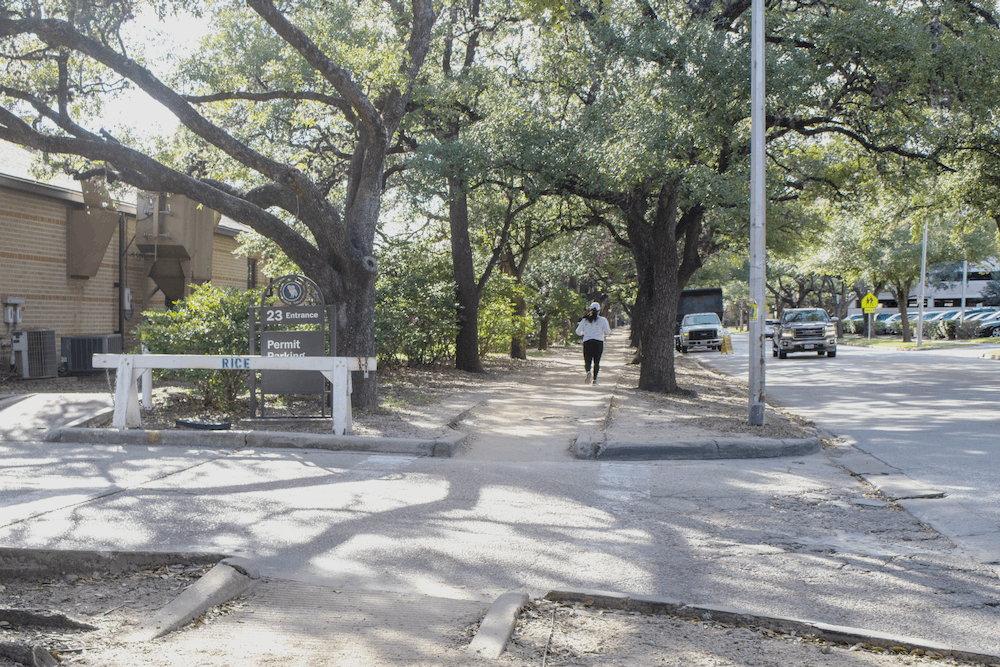 A student’s petition for a crosswalk near the university’s entrance 23 on Rice Boulevard has gained more than 2,000 signatures — 2,052 at the time of print.

Posted on change.org on November 11, the petition is addressed to the city council, the city of Houston and the administration, faculty, parents and students of Rice University. However, the potential crosswalk does not fall under the authority of Rice, Richard Johnson, Rice professor and chair of the Rice Mobility Safety Committee, said.

“Rice Boulevard is a city street, so any decision about installing a crosswalk would have to come from the City of Houston,” Johnson said. “Rice University cannot make physical changes to Rice Boulevard.”

Director of University Affairs Greg Marshall said he discovered the petition as a post in a Rice alumni group on Facebook. He said the administration believes a roundabout, rather than a crossing, would provide the ideal situation for pedestrians and bikers on Rice Boulevard According to Marshall, a traffic signal on the Rice-Sunset [Boulevard] intersection would be ineffective due to the intersection’s triangular configuration.

“We have been told that the city now feels they can only build the roundabout at the corner of Sunset and Rice Boulevard (which they themselves originally proposed) if the church is willing to donate this property rather than having the city pay to acquire it as it would for any other city construction project that involves private land,” Marshall said.

As an alternative to the roundabout, a High intensity Activated crossWalK (HAWK), proposed by Houston Public Works and financed by Rice, was constructed at entrance 23 several years ago, Marshall said. Currently, Rice’s top mobility safety priority is to secure a signal light and safe crossing at gate 20, according to Marshall.

“[HAWKs] are hand-activated crossing signals which will stop traffic when cyclists or pedestrians wish to cross a street but allow street traffic to proceed, unimpeded, at all other times,” Marshall said. “One of these HAWK crossings, the one near gate 23, is still installed and working today; although, as you can see from the frequency with which students choose instead to jaywalk across Rice Boulevard, it appears that many are choosing convenience over safety.”

Houston Public Works is aware of the petition, according to Erin Jones, public information officer of Houston Public Works. A 311 service request for a crosswalk can be submitted to the city, after which an engineering study will be conducted, Jones said.

“If the study finds there is a need for a crosswalk in the area, crosswalk markings will be installed with appropriate signage and signals,” Jones said. “The city traffic engineer has the authority to install traffic control devices like crosswalks.”

“In my personal experience and just from watching other people cross — I’m not expecting [drivers] to stop especially where there’s no crosswalk, right? But they are especially fast and I feel a lot of times not following the speed limit at all,” Mittal said. “It becomes very dangerous for students, anyone who’s crossing, bikers, pedestrians — it’s [even] dangerous for the drivers at some point.”

When she shared her concern with fellow Martelians, Mittal said that other students, especially upperclassmen living off campus, had similar issues with crossing Rice Boulevard. She said she decided to create the petition as visible demand for the crosswalk.

Romi Lee, a Martel junior, said she was proud that Mittal, her Orientation Week new student, had gone through the steps of contacting city council members and the Rice administration.

“Because I live on Bolsover, I, along with several other Rice students, have to play a game of real-life Frogger every time we try to get to and from classes,” Lee said. “Houston drivers are unnecessarily aggressive, and there are several instances where I’ve been grazed by cars that speed up as I am crossing the street.”

Sid Richardson College senior Christen Smajstrla said that lack of a crosswalk has consistently led to difficulties in crossing the road to get home.

“I live on Rice Boulevard and have had multiple instances these past two years where I had to wait upwards of 5 minutes just trying to cross the road. This is not good especially when it is raining or really cold,” Smajstrla said.

Graduate student Mary Natoli provided Mittal with direction on advocating for transportation safety. Natoli has been involved previously in other initiatives for pedestrian safety around the Rice campus, such as crosswalk signs and zebra striping at entrance 20.

Natoli said she thinks that the crosswalk should be accompanied by better lighting along the road, a sign that says “State law: yield of pedestrians in crosswalk” and RUPD presence to strictly enforce yielding behavior along Rice Boulevard.

“I think that the crosswalk Sukul is advocating for should absolutely be installed,” Natoli said. “Rice has huge potential to become a model of a well-designed urban area in Houston.”

Mittal said she initially posted her petition on the Martel Facebook page, where it was shared by other students and eventually to a Rice parent Facebook page.

“I think that’s when it really took off because parents care about their kids’ safety. And then I know it got shared to the page of general Houston moms, which I think it also got sent to other moms of Rice students,” Mittal said. “The mom network really took it off.”

According to Mittal, the petition’s popularity was a surprise to her.

Feedback has been overwhelmingly positive, Mittal said. Comments on Facebook and change.org reveal support from students and parents.

Mittal said she contacted the two candidates for district C councilperson who demonstrated a concern for pedestrian safety in their campaign materials. Both candidates, who are proceeding to runoff elections this December, have support for her petition.

Since the runoff elections will be held next weekend and the winner will take office in January, Mittal said she does not anticipate any physical changes to Rice Blvd. to occur immediately.

“In terms of actual getting a crosswalk, I really don’t anticipate anything happening until next year,” Mittal said.

Mittal said she has a meeting with Vice President for Administration Kevin Kirby scheduled this December. The office of Mayor Pro Tem Ellen Cohen of District C did not respond to the Thresher in time for print.