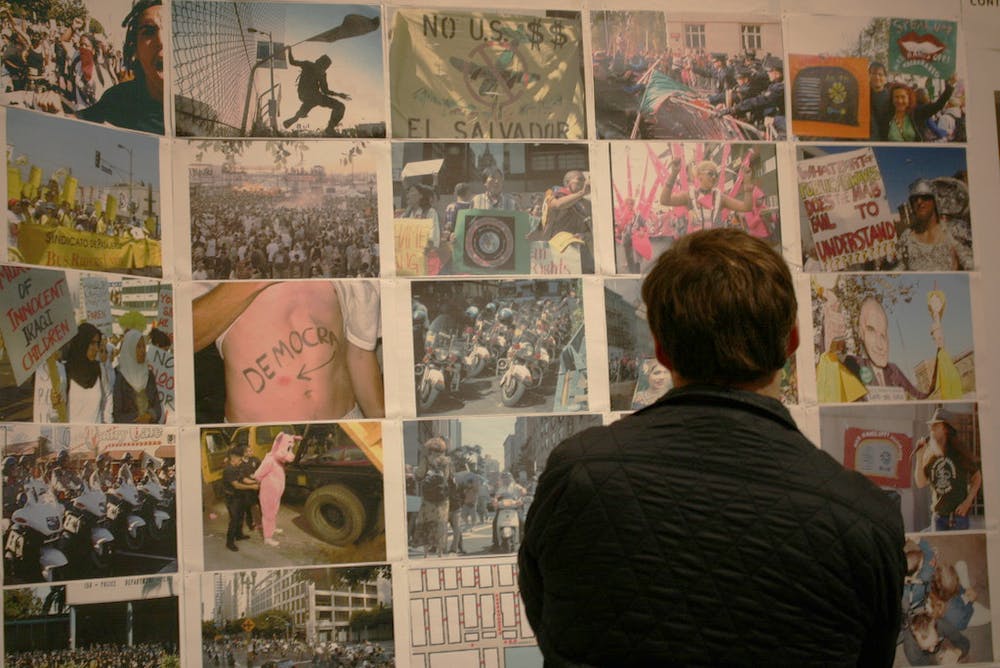 Indymedia, or the Global Network of Independent Media Centre, was an open publishing network and movement of journalist collectives across the world that reported on political and social issues. The movement sprung to life during the 1999 Seattle World Trade Organization protests against the launch of new trade negotiations and economic globalization. Since then, the organization has also collectively produced documentaries, hosted radio shows and published newspapers that resist monopolization of the media and promote non-corporate media activism.

Approximately 30 people, mostly past members of Indymedia, attended the three-day anniversary event which took place at the Rice Media Center from Nov. 29 to Dec.1.

Both floors of the Media Center were transformed into an art and ephemera exhibit full of memorabilia that showcased the twenty-year history of Indymedia. Downstairs, walls were covered in issues of the Brooklyn-based newspaper Indypendent, a photographic chronicle of protests in cities across America. The exhibit also featured headphones to listen to archived recordings of the Houston Indymedia radio show, which still airs weekly on KPFT 90.1. The second floor was adorned with the remnants of old protest gear such as maps, patches, banners and two protest dresses painted by panelist Danielle Chynoweth, as well as a room screening Indymedia documentaries.

The first film screened on Friday was a short documentary titled “Subcomandante Marcos' Message to Freeing the Media Teach-In.” The introductory film consisted of a single close-up shot of a monologue delivered by Subcomandante Marcos, the former military leader and spokesperson of the Zapatista Army of National Liberation in Chiapas in Mexico.

“By not having to answer to the monster media monopolies, the independent media has a life work, a political project and purpose: to let the truth be known,” Marcos said, according to English subtitles in the film. “This is more and more important in the globalization process. This truth becomes a knot of resistance against the lie.”

The following film, “Zapatista,” tracked the Zapatista uprising firsthand from its origins, from the rebel group’s response to the North American Free Trade Agreement in January 1994 to the aftermath of the 1997 Acteal massacre of 45 people by a paramilitary group. The film featured interviews with prominent Zapatista leaders who emphasized the unique quality of the largely indigenous movement against global capitalism, and the invitation for all economically or socially oppressed people to consider themselves Zapatistas.

“At the heart of Indymedia for me has always been a global movement and that was framed by the Zapatista’s invitation and by their question,”Jacqueline Soohen, Indymedia co-founder, said following the film screening.

“Zapatista” was followed by another short film titled “La Voz de los Sin Voz” which centered on the use of radio by local communities during the Zapatista uprising to exchange news and record music. As the film ended with shots of children dancing to music on the radio, the notion of finding spaces for self-expression and joy in the most difficult situations was apparent. The first night of the anniversary ended with a live DJ and dance party.

On Saturday, in a panel titled “Reflections on our Media Movement,” speakers emphasized the importance of community building in the success of the Indymedia movement and for thinking about its future. This was followed by a documentary titled “Praha 2000” produced by Prague Indymedia and films from grassroots independent media collective Submedia TV.

In the evening, Rice Cinema screened a documentary film about the protests that effectively gave birth to Indymedia called “Showdown in Seattle: Five Days that Shook the WTO.” The film included coverage of demonstrations, police repression, arrests of protesters and interviews with leaders of participating organizations. The documentary also took a look at the histories of entwined issues such as Filipino labor movements, indigenous rights and police brutality, as well as reflecting on protest coverage by mainstream media and the practices of Indymedia itself.

On Sunday afternoon, a panel called “Not Dead Yet: The Progeny of Indymedia” was held with speakers from The Indypendent, The Sanctuary for Independent Media and the weekly Houston Indymedia Radio Show on KPFT-FM. They discussed their journeys in building these Indymedia offsprings and the difficult work of financing them.

The panel was followed by a final run of films that would conclude the anniversary event. A newly digitized Indymedia newsreel showcased footage from the Seattle WTO protests exactly 20 years after the day.

This newsreel was followed by the film “Miami Model: Free Trade Police State” which followed the passionate protests that took place against the Free Trade Area of the Americas in 2003. The repressive techniques used by police grew so infamous that they became known as the “Miami Model.”

“If Seattle was some kind of beginning, some kind of victory, I think Miami was a defeat and some kind of end,” filmmaker Ali said. “But there’s still a lot of lessons that we tried to learn at the time and I think they still hold true to this day, especially when it comes to issues of displacement, militarization of the police and what we are getting accustomed to, day-to-day, in the streets.”

In addition to celebrating the memory and accomplishments of the movement, Indymedia 20th Anniversary Encuentro was a call to contemplate the role of independent media in a present and future landscape ruled by social media. In a time where journalists constantly face scrutiny, its mission of “Don’t hate the media, be the media” clearly remains relevant.

Soohen emphasized the importance of storytelling through documentaries, films and radio shows as a possible answer.

“It's the stories that we tell each other from our past and our future that are going to shape what becomes of the information,” Soohen said.