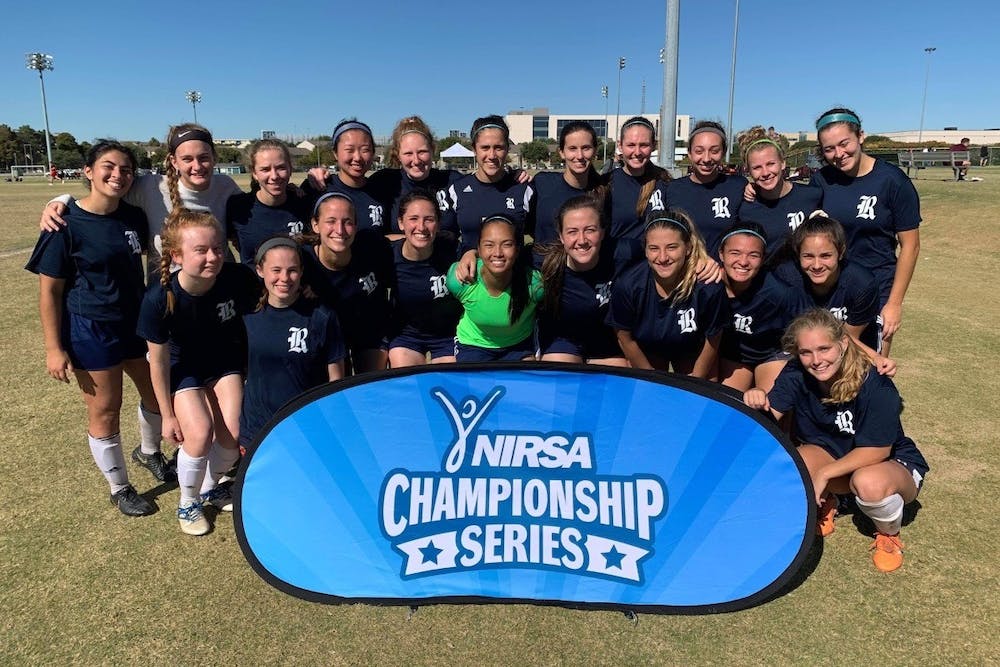 The club team after qualifying for nationals. Courtesy Elisa Arango

This will be the first time the Owls compete in the Championship division of the national tournament. In 2015 and 2017, the Owls qualified for the lower-ranked Open Division via an at-large berth, according to co-captain Elizabeth Hoffmann, who also said this season is the first year Rice has won a regional tournament.

Each team competing in the national tournament will play at least three games against teams from their subdivision; then, two teams from each subdivision will qualify for a four-team, single-elimination playoff to determine the champion. According to club president Elisa Arango, the Championship division semifinals and final will be played Saturday, Nov. 23.

Ayala said the training regime used by the team is intense.

“We’ll go into a possession game that incorporates transitioning from defense to offense, some technical drills, followed by fitness which is prescribed by our coaches,” Ayala said. “We are definitely doing more fitness than our last season and it has really paid off in games.”

The two coaches for Rice, Anna Klineberg (Will Rice College ’17) and Claudia Leon (Baker College ’15), are former Owls who played club soccer. Ayala said Rice is lucky to have Klineberg and Leon as coaches for the team.

According to Arango, the practices scheduled by Klineberg and Leon prepare the team for high-stress situations.

“We always start practices with a quick warm-up and stretching,” Arango said. “We then move on to a couple of technical drills and a possession drill to work on transitions and moving the ball under high pressure.”

According to Klineberg, the starting players are subject to change prior to the national tournament.

“For the next [two] weeks, a starting position will depend on consistency and dedication from the players leading up to Nationals,” Klineberg said. “I have an idea in mind of who I would like to start each game, but like I said, it’s dependent on who shows up to play each day, as well as who we are scheduled to play against.”

Ayala said the Owls are balanced and possess many playing strategies.

“Our style of play definitely changes depending on who we play,” Ayala said. “Sometimes we’re playing a more defensive game, sometimes more offensive. Regardless, we do a great job of building plays from the defense, through the midfield and onto our forwards. We are not a purely offensive or purely defensive team. We have great players in all three thirds of the field so we get to be flexible and creative.”

Ayala said the team is close-knit and the players like to compete together.

“It’s hard work but we each come ready to play and it helps that the team feels like a family, as cliche as that sounds,” Ayala said. “We enjoy being together on and off the field.”

According to Arango, Rice will play two matches on Thursday, Nov. 21 and one match Friday, Nov. 22. Rice will qualify for a semifinal match Saturday, Nov. 23 if the team finishes either first or second in its subdivision after Friday.