Women’s basketball loses to No. 5 A&M 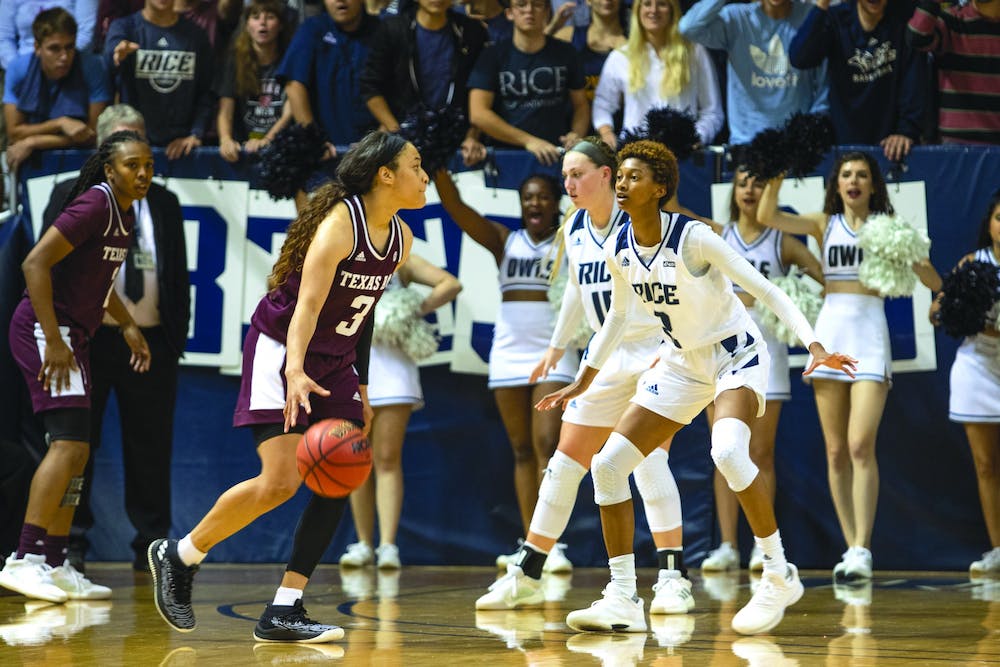 Rice women’s basketball fell to No. 5 Texas A&M University on Sunday, 62-61, in a game which was decided at the last minute. The loss was the Owls’ second in a row, dropping their season record to 2-2.

Rice took a 61-60 lead with 23 seconds left in the fourth quarter after a layup by senior guard Erica Ogwumike. But on the other end, senior Aggies center Ciera Johnson converted a putback layup off an offensive rebound to give A&M the lead with only seven seconds remaining. At the last second, Owls junior guard Sydne Wiggins’ jumper fell short, closing the book on the Owls’ potential upset.

Rice started off the game slowly, with A&M out-rebounding the Owls by seven en route to a ten-point lead at the conclusion of the first quarter. Senior guard Erica Ogwumike said she knew the Aggies’ physical style of play would affect the flow of the game.

“[Texas A&M] tends to be one of the more physical teams we play,” Ogwumike said.

Rice slowly fought back in the second quarter to reduce A&M’s lead to seven heading into halftime. In the third quarter, the Owls changed the game’s narrative quickly. Rice stormed back and took its first lead of the game on a Wiggins three with 57 seconds left in the quarter, closing out the period with a 53-49 lead.

Defensively, the third quarter was an entirely different storyline from the Owls’ first half. After allowing junior A&M guard Chennedy Carter to score 21 points in the first half on 8-14 shooting, Rice held Carter to only eight points on a 0.333 field goal percentage in the first period after the break.

In addition to playing solid defense, several role players stepped up on offense to help the Owls take the lead. Freshman forward Lauren Schwartz, who played 27 minutes and scored zero points the previous game against SMU, scored 12 points in the third quarter, finishing the game with a career-high 19. After the game, Schwartz said her teammates deserve praise for getting her clean looks.

“I got to owe it all to my teammates having confidence in me,” Schwartz said. “I couldn’t have gotten those open shots without my teammates passing the ball and making plays.”

The Owls would not surrender the lead again until the 2:38 mark in the fourth quarter, when a three-pointer by the Aggies gave them a one-point lead. Neither team scored again until there were just 23 seconds left in the game, when Ogwumike converted an inbounds play with a successful layup. According to A&M’s Carter, a five-second violation should have been called when Rice was inbounding the ball on the play.

“I felt like it was five seconds,” Carter said. “That ball was on the baseline for a long time … and then [Ogwumike] went backdoor and I was right there and just fell, and she got the easy bucket.”

However, Johnson’s go-ahead layup with seven seconds left proved to be the Aggies’ dagger. Head coach Tina Langley said Rice could have performed better in the game’s final moments.

“[Texas A&M] played great defense, but I think our execution broke down a little at the end,” Langley said. “It obviously got very physical and I think we needed to rise to that a bit more.”

Langley said she was still happy with the team’s performance.

“I’m really proud of the growth of our team from the last game to this game,” Langley said. “These young women really prepared well and battled incredibly hard all day.”

The loss marks the first time the Owls have lost back-to-back games since Nov. 18, 2018. However, senior guard Erica Ogwumike said the team can still draw positives from the match.

“I definitely do appreciate having a tough preseason schedule and playing these teams that make us work,” Ogwumike said. “I think it pays off in the long run.”

The Owls’ tough schedule will continue this Saturday when they face a 3-0 Oklahoma State University team in Stillwater, Oklahoma at 2 p.m.