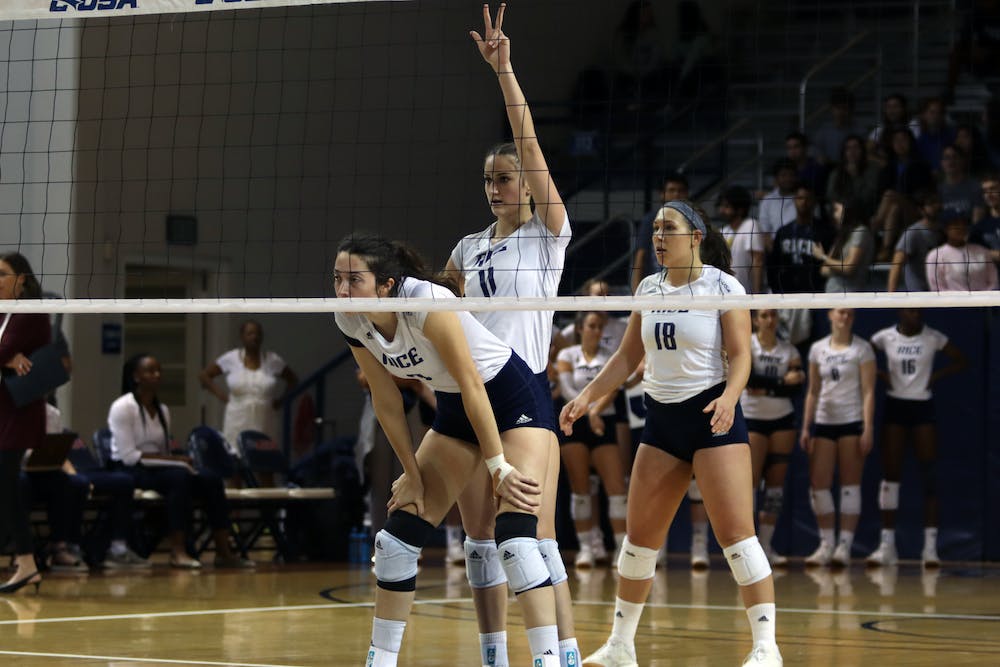 Volleyball won two out of three matches and lost in the final to Western Kentucky University this weekend during the Conference USA Championships. WKU receives an automatic bid to compete in the NCAA Championships, but Rice is likely to receive an at-large bid to compete because of its impressive RPI (No. 14 nationally).

Rice entered the championships on a high note after Grace Morgan was named C-USA Defensive Player of the Week. Rice was one of the favorites to win the championships due to its 13-1 record against C-USA opponents.

One of the Owls’ most noteworthy team statistics is its lopsided ratio of kills to opponent kills (1.32). Also, Rice has outfoxed opponents this season in all team categories, including attack, set, serve, receptions, defense and blocking. Moreover, the team leaders are diversified: among statistics like kills, digs, assists, blocks and services aces, the team leader in each category is different.

According to head coach Genny Volpe, the Owls’ win over UTEP was unconvincing from an offensive standpoint.

“Offensively, this wasn’t our best performance, but we did some very positive things from the defensive side,” Volpe said.

Rice lost its first set against UTSA convincingly (12-25) but bounced back to win three consecutive sets. According to Volpe, the team fought back to win against the Roadrunners.

“We had to bounce back after a poor start that [UTSA] created for us with some tough serving,” Volpe said.

The Owls matchup against WKU was the second time the two teams have faced off at Tudor Fieldhouse this season, with the first matchup a five-set victory for the Hilltoppers, akin to Sunday’s outcome. Also, the teams faced off in the C-USA Championships final in 2016, in a match won in five sets by WKU. The final scoreline on Sunday read 17-25, 25-18, 27-29, 26-24, 9-15 in favor of WKU.

Volpe said the team should be proud of its fight to extend the match to five sets.

“That's what we've done all year is battle and fight, we're just never going to give up,” Volpe said. “I don't think I've ever seen anything like that in that sort of situation where you're down and if you don't find a way to kick into gear, you're done.”

Rice will discover if the team will compete in the NCAA Championships during the NCAA DI women’s volleyball championship selection show. The selection show will take place on Monday, Dec. 1 at 7:30 p.m.