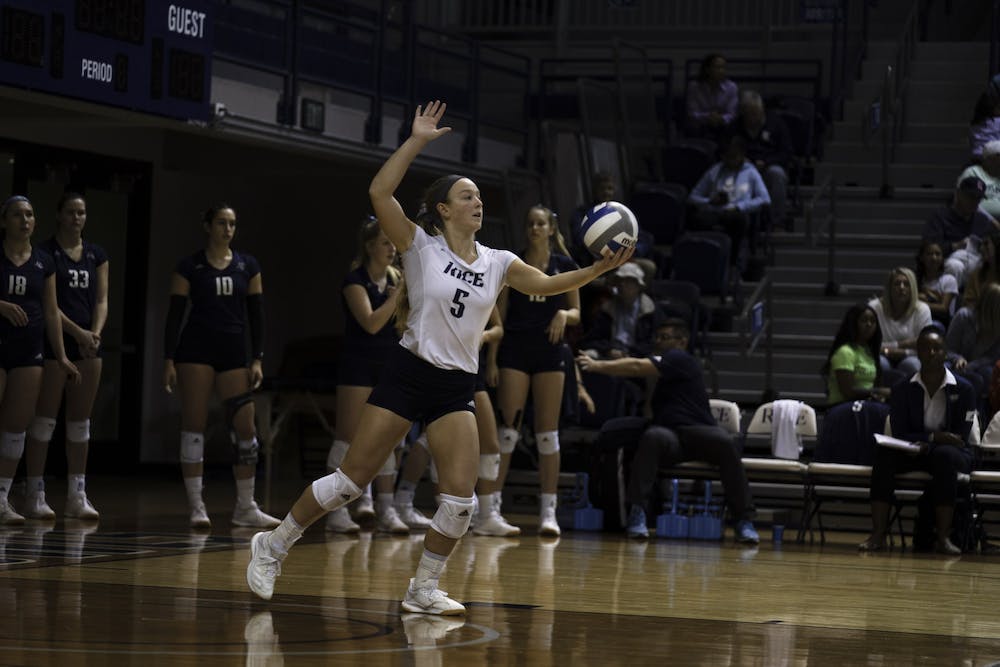 On Sunday, No. 17 Rice volleyball lost for the first time since Sept. 14, in a five-set loss against No. 22 Western Kentucky University. The loss to WKU also marked the end of the Owls’ 13-match winning streak.

Rice began its weekend slate with a defeat against  Florida Atlantic University on Friday. Against FAU, Rice found themselves down four points at 5-9 in the first set. Junior outside hitter Nicole Lennon said the team wasn’t nervous despite trailing early in the match.

“My team is really good at staying calm and composed,” Lennon said. “We’ve been down quite a few times this season and we’ve often rallied back to come and win the set.”

Despite the deficit, Rice fought back and secured a first-set win. Rice then secured the sweep after winning the second set and closing out the match with a 25-13 third-set victory. Lennon led Rice’s offensive attack with 15 kills, and she and senior libero Lee Ann Cunningham combined for 32 digs to lead the team defensively. According to Lennon, Cunningham’s defensive performance was exceptional.

“Not only did [Cunningham] get digs, but she nailed the digs and they were perfect,”  Lennon said.

Entering Friday’s match, Rice had gone to more than three sets in only one match since its last loss on Sept. 14 against Stephen F. Austin State University.

After the match on Friday, Volpe said Rice needed to remain consistent to perform well against WKU.

“[To win] we [should] stay not changing much about what we do,” Volpe said before the WKU game. “We just need to not allow Western Kentucky to not get on any runs because they have a pretty stout offense as well.”

On Sunday, Rice played Western Kentucky on Rice’s Senior Day, in front of of 1,899 fans.  The match was the first time in program history that both the Owls and their opponent ranked in the top 25. Rice started off the match uncharacteristically, losing the first two sets for the first time this season. According to Volpe, the Owls struggled to make early adjustments against WKU.

“We weren’t executing well in the first two sets, although Western [Kentucky] was,” Volpe said. “I felt like it took too long to make some adjustments defensively today.”

But Rice battled back in the third set, securing a 25-19 set victory to extend the match to a fourth set. Volpe said she wasn’t surprised that no team walked away with a straight-set win.

“We knew that today was going to be a battle and that it was probably going to go more than three sets for either team,” Volpe said.

The Owls carried their third-set momentum into the fourth set, jumping out to an early lead. Rice extended its lead to 19-12 on a play that led to a major increase in noise from the student section. Lennon completed a kill that nailed Western Kentucky’s libero in the face and quickly prompted the Rice Volleyball Twitter account to post a replay of the ball bouncing off the face of the Hilltoppers’ libero, while adding the hashtag “#SCtop10” in the subject of the post.

But after Rice finished off their fourth-set victory, the Hilltoppers responded with a 16-14 victory in the pivotal fifth set. According to Volpe, Rice should seek several areas for improvement following the match.

“It could have gone either way and we are just on the wrong side of it today,” Volpe said. “Western [Kentucky] definitely exposed some weaknesses that we need to work out heading into the last two matches of conference play.”

On the note of Senior Day, Volpe said each of the five seniors on the team has contributed to the program in a major way.

“They have all dealt with adversity in one shape or form,” Volpe said. “They have just left their mark going from a program that was really close to top-25 status as freshman to achieving top-20 in the nation and a lot of that has a ton to do with these seniors.”

Volpe also said the leadership of the five seniors on the team will be integral to the program’s future success.

“I think they have set strong examples for the younger players that will last a really long time,” Volpe said.

The Owls will look to continue adding to the resume of the five seniors in their final two conference games this season before the Conference USA quarterfinals begin at Tudor Fieldhouse on Nov. 22.