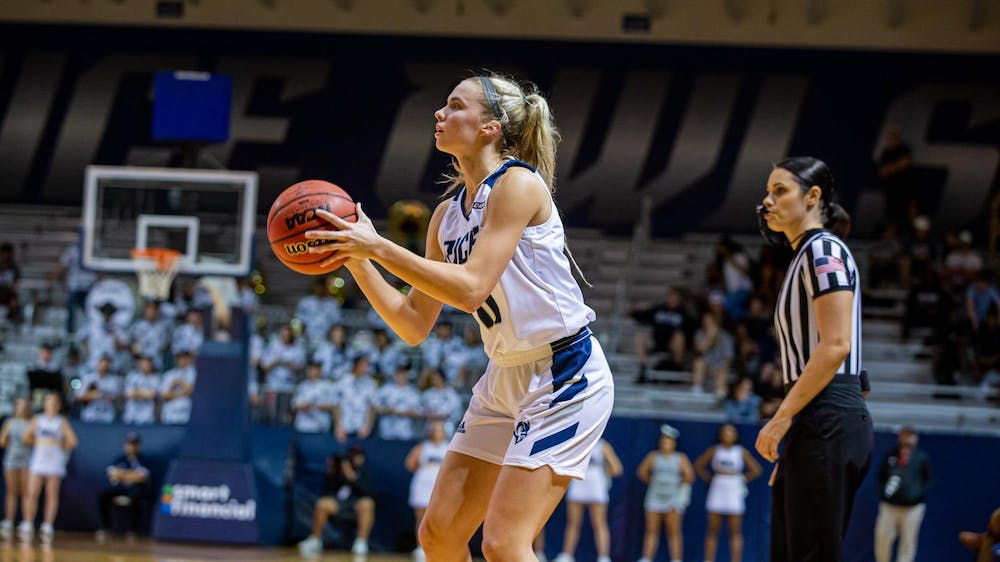 You may know sophomore guard Haylee Swayze from her role as a key contributor to Rice’s successful women’s basketball team, but she’s also a talented multi-sport athlete with passions that guide her life off the court.

Swayze’s basketball experience started at an early age, when she competed in the local youth sports league.  “I started young playing in the YMCA,” Swayze said. “My dad was my coach and it was always super fun.”

As Swayze grew into adolescence, she continued to play basketball while also excelling in several other sports. On the softball field at Purcell High School, Swayze helped lead her team to a 2017 Oklahoma state championship. Swayze also competed in cross-country and was a standout track athlete, winning five individual state championships: tw0 in the 300-meter hurdles, and one each in the 100-meter hurdles, 200-meter dash and 400-meter dash. In 2018, Swayze’s 55.68-second winning performance in the 400-meter state championship meet set an Oklahoma 3A high school record and was the fastest time across all divisions.

During her senior year, she was an All-State selection in all four sports. According to Swayze, choosing to pursue basketball over other sports at the collegiate level was not an easy decision, due to her love for different sports.

“I enjoyed playing all those sports in high school and one summer I sat down with my parents and decided to do travel basketball, travel softball and some track meets and just to find out which one I loved more,” Swayze said. “I fell in love with basketball and had some success and wanted to pursue it at the collegiate level.”

“[Rice was] the first school to start recruiting me and I kind of pushed it on the backburner,” Swayze said. “I didn’t know much about it, but they were very consistent.”

Swayze said ultimately, Rice’s academic opportunities and successful basketball program proved to be too much to pass up. After averaging only 4.3 points per game as a freshman last year, Swayze re-introduced herself to Rice fans this season by scoring 22 points in the team’s season opener against Nicholls State University. Her scoring output on 7-14 shooting helped guide the Owls a 71-47 win. Swayze said that she has developed as a basketball player during her time at Rice.

“Going from last season into this season I knew I had a lot to learn about the game still,” Swayze said. “I had to develop my skills offensively and defensively.”

According to Swayze, she strives to improve off the court as well. Swayze is a kinesiology major concentrating in health sciences, and was awarded the 2018-19 C-USA Commissioner’s Academic Medal for her academic achievements. In addition to her athletic and academic pursuits, Swayze also said her faith has been a guiding principle in her life. She is on the leadership team for the Fellowship of Christian Athletes, which is a Christian ministry with a chapter at Rice.

“Faith is a big part of my life so it is super cool to have that outside of basketball because [life] is bigger [than that],” Swayze said. “I’m not just a basketball player.”

This week, Swayze will return to her home state when the Owls face Oklahoma State University in Stillwater, Oklahoma on Nov. 23.