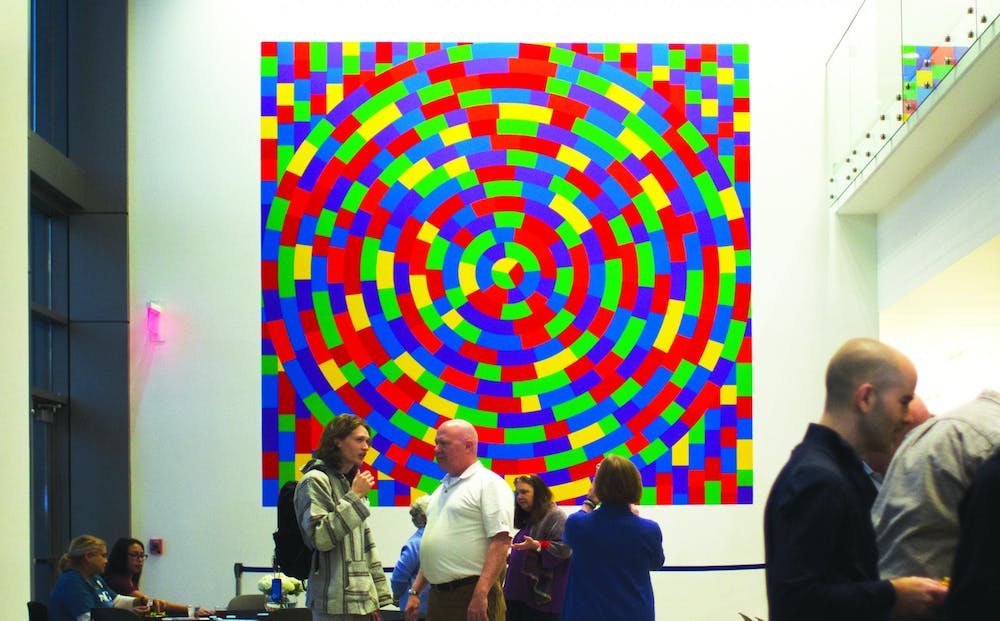 Two works by pioneer conceptual artist Solomon “Sol” LeWitt have found a home at the Glasscock School of Continuing Studies in partnership with Rice Public Art.

On Monday evening, members from the Rice community gathered at the Anderson-Clarke Center to “solebrate” the acquisition and completed installation of LeWitt’s “Wall Drawing #1115” and “Wall Drawing #869A.”

LeWitt, who passed away in 2007, did not install or create the artwork himself. Instead, his art is intended to be interpreted and created by others, who follow the conceptual artist’s vague instructions to develop unique manifestations of his ideas.

Alone, the vague clinical titles do not encapsulate the drawings’ explosive vibrancy. “Wall Drawing #1115” is a kaleidoscopic mosaic of brightly colored panels arranged in rings. The drawing adorns the south wall of the Dean’s Commons of the Anderson-Clarke Center, immediately catching the eye of entering visitors. After witnessing the awe with which guests gazed upon the hypnotic work, it’s almost impossible to imagine the wall being blank.

“Wall Drawing #869A,” installed in the second floor lobby, is more subdued with layers of thin, meandering lines of red, blue and yellow.

A crowd of alumni, donors and trustees, artists and students gathered in the Dean’s Commons Monday night to marvel at the works. President David Leebron spoke to the audience’s diversity in his opening remarks, emphasizing how the concurrent presence of seemingly disparate entities represented the university’s values. Leebron went on to underscore the vitality of art on campus and how the Glasscock School, which he cited as one of the most visited buildings on campus, is the perfect exhibition space for the drawings.

Alison Weaver, executive director of the Moody Center for the Arts, took the podium next. “Every great installation has a story,” Weaver began before chronicling the weeks-long process of the drawings’ installation. “Like a musical score, [LeWitt’s instructions] can be interpreted differently by different artists.”

“Wall Drawing #1115” was installed by four draftspeople over the course of a month after being permanently acquired by Rice Public Art from H. Russell Pitman (Hanszen College ’58). Gabriel Hurier, a lead installer at LeWitt Studio, oversaw a team of three local artists including David Krueger, head exhibit preparator at Rice’s Moody Center for the Arts, and Cat McCaully and Jacob Villalobos, who have both contributed to Moody exhibit installations in the past.

Cathy Maris, director of the Sol LeWitt project at the Glasscock School of Continuing Studies, showed a time lapse video which featured the draftspeople treating each panel of color seven times until finally the finished drawing radiated vibrant color.

As the first conceptual artwork in the Rice Public Art collection, “Wall Drawing #1115” invites the Rice Community to contemplate a new genre of art on campus.

The installation of “Wall Drawing #869A” was even more collaborative in its installation. According to Maris, the Glasscock School wanted to involve a wider range of Rice community members in the exhibit so the Paula Cooper Gallery agreed to loan #869A since it’s a “copied lines” drawing.

This type of drawing essentially makes it possible for anyone to participate — the lines didn’t even have to be straight. John Hogan, installations director for the LeWitt Estate, trained a team of installers who completed this “copied lines” drawing over three days from Nov. 4 to Nov. 6. A team of 36 people participated which included seven Glasscock students, two Glasscock studio art instructors, six Rice undergraduates from visual and dramatic arts and architecture, two VADA faculty and a mix of Rice alumni, Glasscock staff members and other stakeholders and community members.

Because this is the first time this wall drawing has been installed anywhere in the world, everyone who participated in the project will be included in the Sol LeWitt wall drawing “catalog raisonné,” a digital record of the more than 1,200 installations of LeWitt’s wall drawings.

Maris said that the contrast of the two drawings helps viewers understand the potential of LeWitt wall drawings.

“You go upstairs to see Wall Drawing #869A and are forced to reconsider the essence of a LeWitt wall drawing,” Maris said. “Is it a painting? A drawing? …  A precisely measured shape? A series of organic lines that unfold in unpredictable ways? In the end, a wall drawing can be all of these things.”

Wall drawings #1115 and #869A mark an extension of Rice’s longstanding relationship with LeWitt. The late artist was commissioned by Rice Gallery in 1997 to create the site-specific “Glossy and Flat Black Squares,” which was recreated in 2017 as the concluding exhibition of Rice Gallery which closed that same year.

“Sol figured out how to make art eternal. That was his genius,” said Kim Davenport, founding director of Rice Gallery, said.

In his 1967 “Paragraphs on Conceptual Art,” LeWitt wrote, “the idea or concept is the most important aspect of the work … the idea becomes a machine that makes the art.”

These words are intensely relevant to the acquisition of wall drawings #1115 and #869A, as the ideas of collaboration, education and accessibility propelled installation forward.

“The single most common word I’ve heard applied to LeWitt is generosity,” Maris said. “His artwork is grounded in a generous approach to making. He viewed his draftspeople as collaborators and trusted that they would honor his ideas and implement them with integrity. Rice is certainly a community that shares LeWitt’s celebration of ideas and his collaborative, inclusive spirit.”

You can view “Wall Drawing #1115” in the Dean’s Commons of the Anderson-Clarke Center at any time as it is a permanent piece in the Rice Public Art collection. “Wall Drawing #869A” will be on view on the second floor of the center for the next three years.