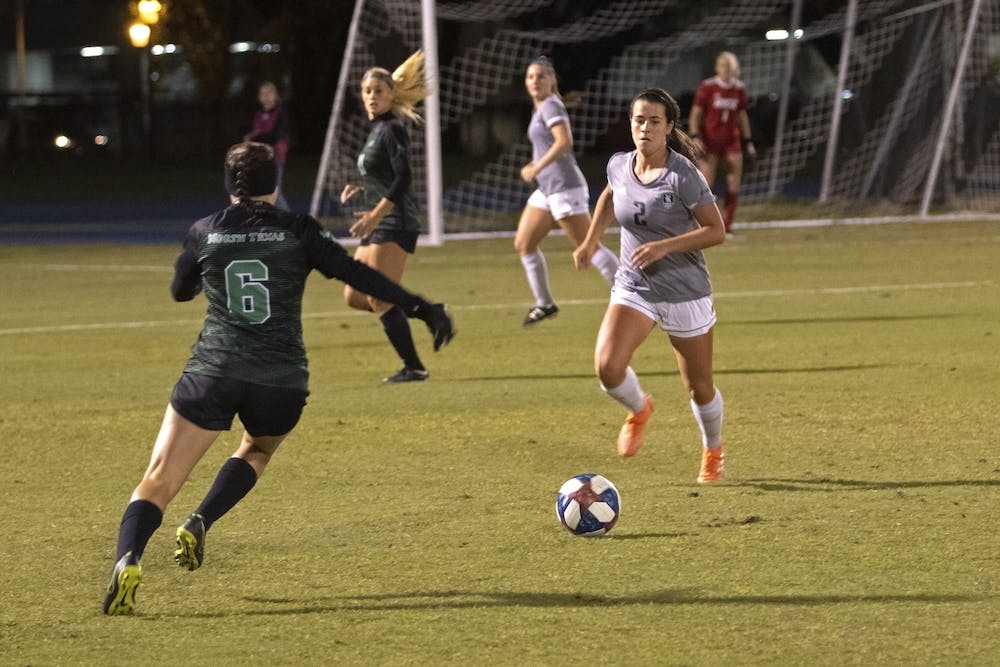 Rice soccer tied the University of North Texas 0-0 after two overtimes on Friday evening, claiming the No. 3 seed in the upcoming Conference USA Championship. Rice holds an overall season record of nine wins, five losses and three draws; in C-USA play, the Owls have six wins, one loss and three draws.

Rice’s stalemate with UNT provided each team a point in the C-USA standings. Because the prior No. 2 team, University of North Carolina, Charlotte, lost on Friday to Old Dominion University, both UNT and Rice jumped up one place in the C-USA standings after Friday’s match. UNT will be the No. 2 seed in the championship tournament.

The match was Senior Night for the Owls: The seniors on the team are forward Louise Stephens, midfielder Lianne Mananquil, midfielder Erin Mikeska, forward Haley Kostyshyn and goalkeeper Maya Hoyer; four of the seniors are from Will Rice College. This season, every senior for Rice has played in at least 13 games and seniors have contributed 61.5 percent of Rice’s goals.

Mikeska said she has enjoyed her time playing for Rice.

“It’s a really special time,” Mikeska said. “I think every senior, when it gets this far, they can’t believe it has gone so fast. They’re really cherishing the moment. I think that’s all any of us were trying to do tonight, just take it all in.”

Mananquil said she relishes playing as a senior, especially after suffering an ankle injury earlier in the season.

“It being my senior year, getting an injury like that was pretty devastating at first, but I’m happy to be back,” Mananquil said.

During the first half, UNT’s offensive attack was far more prolific, with the Mean Green attempting 13 shots to the Owls’ two. On the season, opponents are outshooting Rice 249-191. Still, UNT was unable to score a goal past sophomore goalkeeper Bella Killgore, and at halftime the score remained 0-0.

Hoyer subbed in as goalkeeper to begin the second half. Hoyer held UNT without a goal during the period, even when Mean Green forward Brooke Lampe hit the crossbar with a shot in the 88th minute of the match. Rice had an opportunity to score in the 90th minute of the match when Kostyshyn fired a shot on goal, but the shot was saved by UNT goalkeeper Kelsey Brann. Kostyshyn said she was disappointed that she didn’t score the goal.

“I definitely wanted to score more than anything,” Kostyshyn said. “Just being in that position was really important at that time. Obviously it didn’t go our way. I just had to try my best.”

Neither team was able to score during either of the two 10-minute overtime periods. Rice was unable to force a save from Brann in overtime.

Head coach Brian Lee said he believes the halftime adjustments made by Rice and UNT at halftime increased the likelihood of a draw.

“I thought, second half, both teams made some halftime adjustments that kind of evened the game out,” Lee said.

The match counts as Rice’s eighth clean sheet of the season. Lee said he was pleased with the play of Killgore and Hoyer at goalkeeper and Mikeska at holding midfielder, where she focuses primarily on aligning the Owls in solid defensive positions.

“It was a good game, in a good, continued rivalry,” Lee said. “I thought Maya [Hoyer] made a huge save late. It was an absolutely class save on probably the best chance of the game for either team. And I thought Erin Mikeska had a great game in the second half. She kind of changed her shape a little bit, and played a slightly different role that had a big say in how the flow of the game went.”

Rice and UNT will rematch in the C-USA Championship semifinals if Rice defeats Middle Tennessee State University and UNT beats the University of Texas, El Paso. Mikeska said in the case of a rematch, Rice should not make major tactical adjustments from the match on Friday.

“I don’t think we need to change anything,” Mikeska said. “I think we did a really good job tonight. We had a couple of really good breakaways where just half a second changes the whole game. I think we really finished the game with momentum so I’m sure we’ll go into the game with confidence if we have to play them again.”

Rice will face MTSU on Wednesday in the No. 3 vs. No. 6 seed matchup in the first round of the championship. The match will be played at 4:30 p.m. in Denton, Texas. MTSU has a record of five wins, four losses and one draw against C-USA opponents this season.