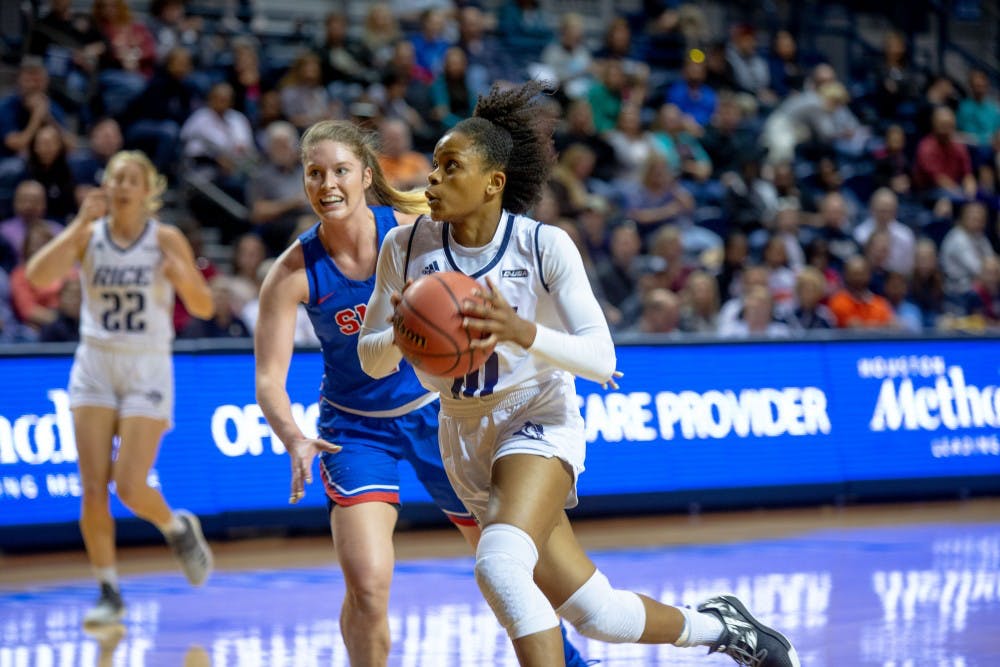 Last year, Rice women’s basketball had its most successful season in program history. The Owls won a program-record 28 games (including 21 in a row) and posted a perfect 16-0 record in Conference USA play, the first team in conference history to do so. Rice also achieved its first-ever top-25 ranking on its way to its first NCAA Tournament appearance since 2005. This year, Rice will look to build upon its previous season’s success while integrating its newcomers to a young team.

After losing their first-round matchup in a closely-fought battle to Marquette University last year, the Owls boast nine returners to the team, as well as five new faces. According to senior guard/forward Erica Ogwumike, Rice’s takeaways from last year’s tournament game were positive, despite the loss.

“I think it was a great experience that allowed us to visualize what it looks like when a team comes together for one collective goal: making each other better and focusing on the process,” Ogwumike said. “I believe that [after] having a majority of the team experience that firsthand, we have an innate motivation now to strive for excellence and to uplift our teammates as we do it. I don’t think anything negative came out of the NCAA experience.”

Much of the team’s core this year remains the same as last year’s squad. Of the primary rotation last year, the Owls have lost starting forward Nicole Iademarco, sixth woman and guard Lauren Grigsby and backup forward Shani Rainey, all graduated seniors. But four of the five starters from last year have returned, including guards Jasmine Smith and Sydne Wiggins, a sophomore and junior respectively, junior center Nancy Mulkey and Ogwumike. Tina Langley returns for her fifth season as Rice’s head coach after signing a five-year extension during the offseason.

Ogwumike and Mulkey were Rice’s top two scorers last year, averaging 16.5 and 13.9 points per game respectively. But the top-scoring returning Owl outside of those two was Wiggins, who averaged 6.9 points per game last season. According to Ogwumike, integrating the newcomers on the team will be crucial to success this year.

“We will certainly have to work and study more this year to combat what seems like a lack of experience,” Ogwumike said. “I think focusing on being prepared … will help fill those gaps. We definitely have to make an adamant effort to do that, but these freshmen and returners are already doing just that.”

There are five freshmen on the Owls’ roster this year. Guards Destiny Jackson and Katelyn Crosthwait supplement Rice’s backcourt, while forwards India Bellamy, Lauren Schwartz and Ashlee Austin will bolster the frontcourt rotation. According to Mulkey, the freshmen have a lot to learn but are quickly learning the ropes.

“Having five freshmen join our team this year has been unique … in the sense that we have so many offenses to learn in such a small amount of time and [throw] at the freshmen,” Mulkey said. “But the freshmen have done a great job with handling everything that Coach Langley has given them.”

Ogwumike is the only senior on the roster this year. According to her, that experience increases her profile as a team leader.

“I definitely am in a more defined leadership role this year,” Ogwumike said. “I think it’s great though because it pushes me every day because I can never just be thinking about myself … I think my job is to just inform so ultimately [I] can provide autonomy to those younger players and they can do the same when [I graduate]. It’s a neat position to be in this year.”

Rice will start its season with a pair of home games, first facing off against Nicholls State University on Tuesday, Nov. 5 at 7 p.m. before taking on the University of Arkansas, Little Rock on Saturday, Nov. 9 at 1 p.m. The Owls’ toughest test this season will likely be their Nov. 17 matchup against Texas A&M University, who was ranked No. 9 in ESPNW’s preseason top 25.

“I’m just looking forward to competing with my teammates and providing the wonderful Rice community with an exciting season,” Ogwumike said. “Rice is always such a powerhouse of an academic institution so it is such an honor to be one small factor in getting Rice recognized in women’s basketball as well.”