Rice Public Art ‘Off the Wall’ Initiative Kicks Off 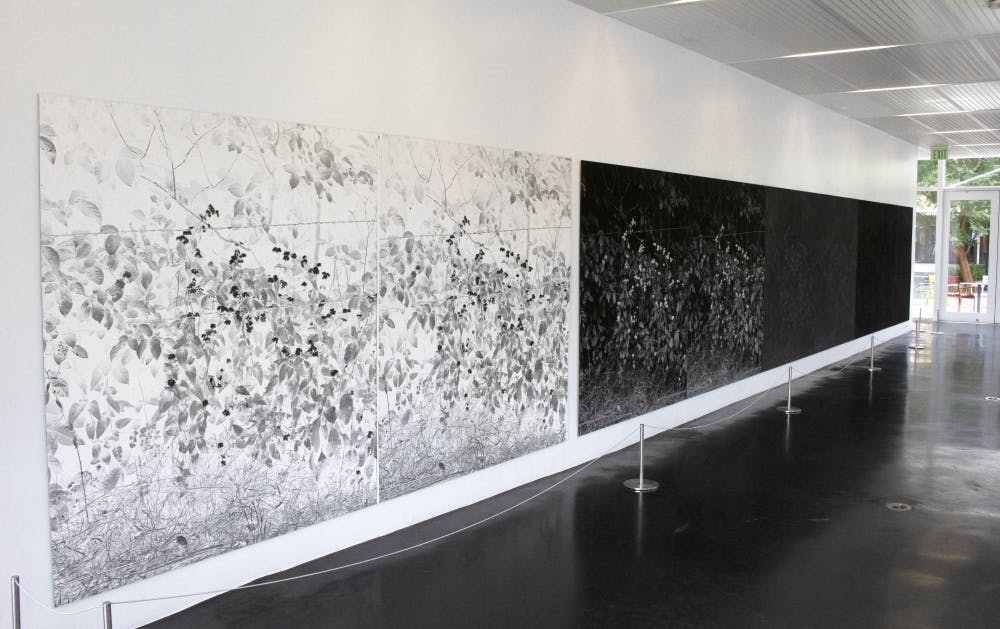 Through a collaboration between the Moody Center for the Arts and the Museum of Fine Arts, Houston, artist Harold Mendez brought his work “Field (Encounter)” to the Brochstein Pavilion. Four life-sized charcoal-brushed panels of branches and floral foliage now adorn the previously blank south wall.

Mendez is the first artist to be featured in Rice Public Art’s “Off the Wall” series. The series seeks to annually highlight the art of one recent graduate of MFAH’s Core Residency Program at the Glassell School of Art — a postgraduate residency for art critics and visual artists. During his residency, Mendez taught visual art at Rice as a Core Fellow.

According to the artwork’s caption, Mendez intended for “Field (Encounter)” to ignite a curiosity for what lies beyond the branches, tugging at viewers’ imaginations with the brush and barbed wire that surrounds all sides. As viewers consider the invitation to peer beyond the leaves, they should realize that they are the “body absent in the original composition.”

“Visitors are struck by the black-and-white imagery and the almost filmic progression across the long wall,” wrote Alison Weaver, executive director of the Moody Center. “The work slows the viewer down and invites her to engage with the image and its context.”

Korina Lu, a Duncan College sophomore who worked with Mendez on the project, said she felt this illusion of time slowing down.

“I remember that the day I was working here I had so many science assignments due,” Lu said. “I was very panicked and stressed out, but when I was working here, time stopped and I immersed myself into creating the art. The fact that it stops [your perception of] time is very interesting.”

Sourced from the Keystone Mast Collection, a collection of 350,000 photographs from the late-19th and 20th century, the image aligns with Mendez’s tradition of creating photographs that draw upon the “complex narratives of his Mexican and Colombian heritage,” according to the caption.

“The natural imagery brings the outside in, while the barbed wire invokes borders and political issues surrounding immigration,” wrote Weaver.

The foliage imagery of Mendez’s piece integrates the inner south wall of Brochstein with the outdoor scenery visible through its glass walls. The grayscale color choice blends seamlessly with the building’s color palette and with the black-and-white photographs already in view on the pavilion’s north wall.

As a place for lively meetups and spontaneous interactions, Brochstein’s function is improved by the piece. The “soft-gray tones” make the atmosphere of the pavilion more inviting, according to Duncan College senior Gillian Culkin, who worked on the project alongside Mendez and Lu.

“It goes along with that pattern of being modern, but as an outdoor scene, it is more natural,” Culkin said. “Brochstein with no people in it would be a very cold space, so [the piece] brings life to it.”

The piece has brought a creative perspective to Brochstein by strengthening Moody’s visibility and connection with a central hub of the campus, according to Weaver.

“One of the goals of the public art program is to offer innovative and meaningful experiences with works of art to the Rice community by intervening in public spaces,” Weaver wrote. “This wall offers a terrific opportunity to do just that.”

Culkin, who became involved with “Field (Encounter)” through the Moody Center, anticipates that the placement of this piece at the heart of campus will entice more students to visit the Moody, where the “Moonshot” exhibition was held last week.

“There are a lot of cool things at the Moody, but since it’s ‘far away’ students don’t generally go there,” Culkin said. “People go to Brochstein all the time and see this huge thing on the wall and wonder where it came from, associate it with the Moody and then they actually head over, so it’s sort of an outreach thing.”