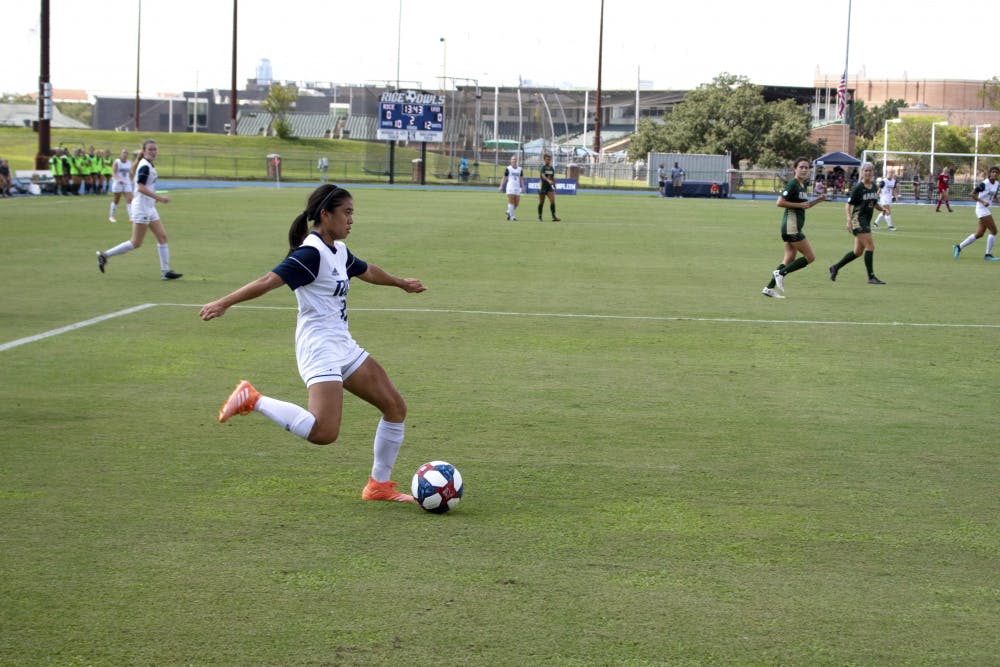 Senior forward Louise Stephens scored a dramatic, game-deciding goal from a corner kick and Rice soccer earned a 1-0 victory over Conference USA foe University of Alabama, Birmingham on Sunday afternoon at Holloway Field. With the win, the Owls now hold a record of six wins, four losses and one draw on the season. Rice remains undefeated in four matches against C-USA opposition.

Kostyshyn, Stephens, Schultz, Mikeska, Killgore, Page and Roelfsema have started in all 11 games for Rice this season. Head coach Brian Lee said he credits the team’s strength and conditioning regimens for enabling the players to stay healthy and fit, even when playing temperatures exceed 90 degrees.

“Really what the goal [of our training] is, physically, we want to be healthy, number one,” Lee said. “[We want to] avoid the quad and hamstring type injuries, those which are caused by muscle tightness.”

UAB took the first shot of the game in the sixth minute of the match, a header by Tori Gann which sailed wide of goal. However, most possessions involved no more than three or four short passes, followed by either an interception or a long pass played to the other team’s defensive back line.

Three minutes after UAB’s first shot attempt, Rice began to develop an offensive rhythm. Mananquil and Schultz played several one-touch passes, and after Kostyshyn placed a shot narrowly wide of goal, Stephens forced the first save of the match by firing a rising shot at Blazers goalkeeper Johanna Popp.

Only one more shot was played on goal prior to the first-half water break. But when the teams retook the field, UAB surged forward in attack. The Blazers played a short, high cross from inside the penalty box, provided a flick-on header and narrowly missed the resulting header over the crossbar.

Although five shots were played on goal during the first half — two by Rice and three by UAB — Killgore and Popp both maintained clean sheets going into halftime.

Senior goalkeeper Maya Hoyer, who substituted for Killgore during the second half, said she appreciates her season-long rotation with Killgore in front of goal.

“Whether or not [Killgore] and I are on the bench or we are playing, we support each other fully,” Hoyer said. “When I go in, whether the score is 0-0 or whether we are up 4-0, as long as we are playing our game, I know that we’ll come through.”

Mananquil developed the first attack for Rice in the second period. She cut inside and swung the ball forward to Kostyshyn, who played a lob pass toward the goalkeeper’s line to Schultz, who headed the ball back in front of goal — but no Rice player was there.

According to Stephens, Rice does not draw up set plays to assist its offensive attack.

“I think what we’ve been working on in practice is just trying to get service into the six, and creating as many dangerous balls as possible,” Stephens said. “[We plan to] keep working on our finishing and keep trying to connect in the final third.”

UAB’s second half involved several miscues on headed shot attempts. Although the Blazers outnumbered the Owls in shots on goal during both the first and second halves, none of UAB’s attempts made their way past Hoyer.

Rice finally gained its opportunity in the final five minutes of the match after playing for a corner kick. Each of the Owls’ first two attempts by Roelfsema on the right corner post were deflected out by UAB players. The second deflection resulted in a Rice corner kick from the left post.

There, Mananquil lobbed the ball with the inside of her right foot and the ball found the back of the net after Stephens chested it. According to Stephens, scoring the game-winning goal made her feel proud of the team.

“I think our team just loves a dramatic ending,” Stephens said. “But it feels really good to be able to pull it out at the end. I think it shows our toughness.”

Lee said he thinks his team has prepared for long, “even” matches.

“I just think we are fit and we’re fresh,” Lee said. “I think [the difference] shows in comparison to the other teams by the time we’re getting near the end.”

According to Lee, one basis of improvement for future games involves choosing quick, short passes in the attacking area of the field.

“We’re trying to shoot a little less,” Lee said. “We want our chances to be high quality and we are very good in combination in the final third. Once in a while, we shoot earlier than we probably need to, whereas if we get a two- or three-pass combination, we might get a really good chance.”