On the rise: A conversation with Armani White 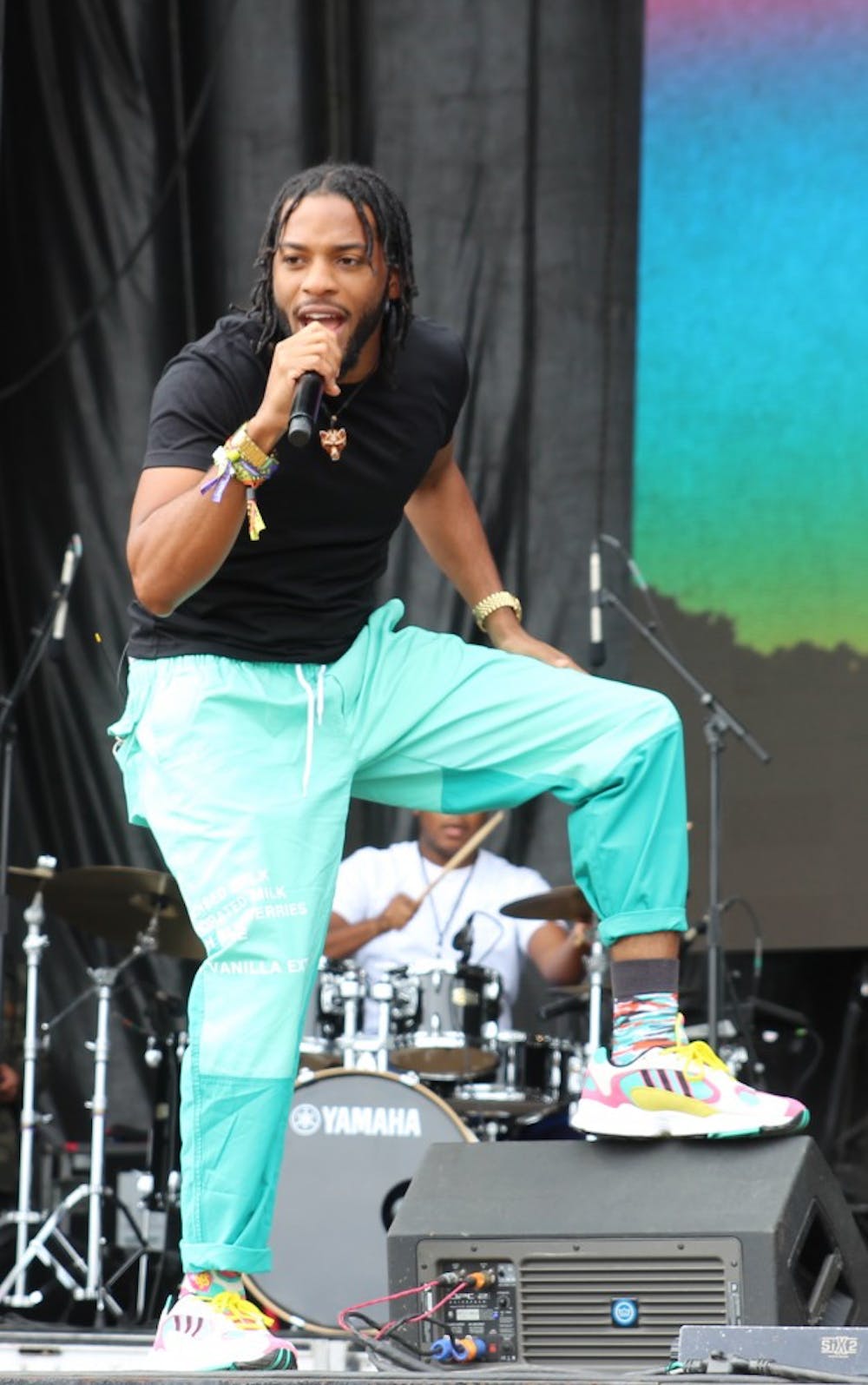 After enduring a freakishly cold first day of weekend two at Austin City Limits Music Festival, the prospect of having energy before noon was inconceivable — until Armani White hit the stage.

Festival goers passing the T-Mobile stage on Saturday morning stumbled upon a full-fledged hype fest complete with bags of fruit snacks being thrown out into the crowd by White and his bandmates. White was joined by drummer Bradley Pockets, vocalist Christian Eason and Jah the DJ, also known as Ohmyjah. From the infectiously happy chorus of his hit single “Onederful” to the buzzing bass and cutting lyricism of “Public School,” every single song electrified the bouncing 11:45 a.m. crowd.

White is a poster child of hip-hop artists on the rise. With tens of thousands of followers between the music streaming platforms SoundCloud and Spotify and exposure from publications like Pigeons & Planes, TIDAL and Billboard, White has broken into the hip-hop scene with the same unique, zealous individuality with which he performs.

ACL was only the latest in a string of recent high-profile performances. White performed at the 2018 Made in America music festival, 2018 BET Hip Hop Awards Cypher, 2019 South by Southwest and in support of Vince Staples’ “Smile You’re on Camera” tour.

With his whirlwind rise to fame behind him and plenty of ambition, White discusses his roots, his goals and the serendipity of it all.

K: Hello! It's very nice to meet you

AW: Hey, how are you? My name is Armani White, your name is?

K: My name is Katelyn.

AW: Do they know your name?

K: They know my name.

AW: Do they know my name?

K: I saw your set earlier, it was awesome. I brought my brother to it too; he had never heard you before and he loved it.

AW: That's great, did y'all catch the fruit snacks?

K: Yeah we did actually! When did that whole tradition of the fruit snack throwing start?

AW: So, we played a show at an art gallery in 2014 or something, one of my first early shows. And I didn't know if anyone was gonna come so I wrote on my Twitter, "Hey if anybody comes, I'll give you guys free fruit snacks." And I don't know why I just had a box of fruit snacks on me and so, when I got there we were playing a song, we were playing a set, we were two songs in and somebody was like "Where's the fruit snacks?!" And I was like aww, dang. So luckily, I grabbed some and we threw 'em out in the crowd and ever since then, it's just become bigger crowds, more fruit snacks — we got five more boxes so. It's been a thing for a while now and it's fun every time.

K: Is that an every show thing?

K: When was it that you decided you wanted to do music? And how did your family react to it?

AW: So, I heard a song called "Kill You" by Eminem. It's not a good song to tell your parents you want to make music [like], but from there, I told my dad and he was very curious to see if I would actually follow through with it. My mom was on the fence with it and not even because of how I was trying to make music but more so because she's very traditional. She finished college, she has a master's degree, she also went into the military so she's very like, "You have to do solid things that you know [are] gonna work." And I was like, “I know this [is] going to work, mom! Trust me!” And so we clashed on it for a while up until MTV dropped an article that was like "Top artists to watch for next year" and I was on that list and my mom instantly switched over, she was like "You know, I seen that MTV interview, when's your next show?" And so, yeah my mom is very accepting to it now so I think that's a good part of it.

K: I read your Billboard interview about how your niece helped you come up with the lyrics to "Onederful." In the interview, you said it was a "beautiful accident" and I thought that was very beautiful. So I wanted to ask, have any beautiful accidents happened lately, musically or otherwise?

K: So, the basic question: How has ACL been for you?

AW: It's been really fun. The crowd started out really small and as we went on, I want to say by like the second song, it was like a full crowd where some people knew who we were, some people who were like, "What is this and why do I love it so much." Either way it was a really cool experience.

AW: We've been touring all year this year and hopefully I can find a nice gap in the middle of 2020 or maybe the beginning of 2020 to just fall back — record music, stay home, enjoy family time. I haven't really — I've seen my mom maybe 20 times out of this total year so you know, really take some time to come by her house and spend some time with her, things like that. Hopefully that's what it looks like for the beginning, maybe like January. Then after that we're probably just going back on the road, dropping more music, we're coming out with a full-length project so we're dropping that, dropping more music on top of that. Just doing more shows, touring different places that I haven't been to yet.

K: If you could be any artist for a day, living or dead, who would you be?

K: Can you tell me about a dream you had recently if you can remember one?

AW: I had a dream that I was the owner of my own TV dinner company, I can't remember the name of it. It was like a Hot Pocket type of situation, but it was vegan because I just can't eat cheese.

K: Do you feel like Austin is male or female or somewhere in between?

AW: Austin is female. Austin is a White woman with dreadlocks. (laughter) I do think Austin is a woman, could be White or Black, but it's a woman with a tapestry in her room somewhere, preferably with some kind of scented candle and essential oil going up at the same time. I think Austin is a very eclectic city — what's the phrase?

AW: Yeah, “Keep Austin Weird.” I think that's very fitting for the city. It's just like you can walk down the street and see so many different flavors. I love Austin. And you guys have scooters! I love the scooters, they don't have those in Philly. I've definitely face-planted on one of them before but I still love them.

K: Last question — you mentioned Houston earlier and you said you haven't been there. May I take some words from you back to Houston?

AW: I love you guys, I'm coming. Houston has the most beautiful women I've ever seen! And I really want to see [the city] in person. I don't even want to play a show, I just want to come and experience it. I'm putting it on my bucket list: within the next six months I'll be in Houston for something. Something! Whatever it is.