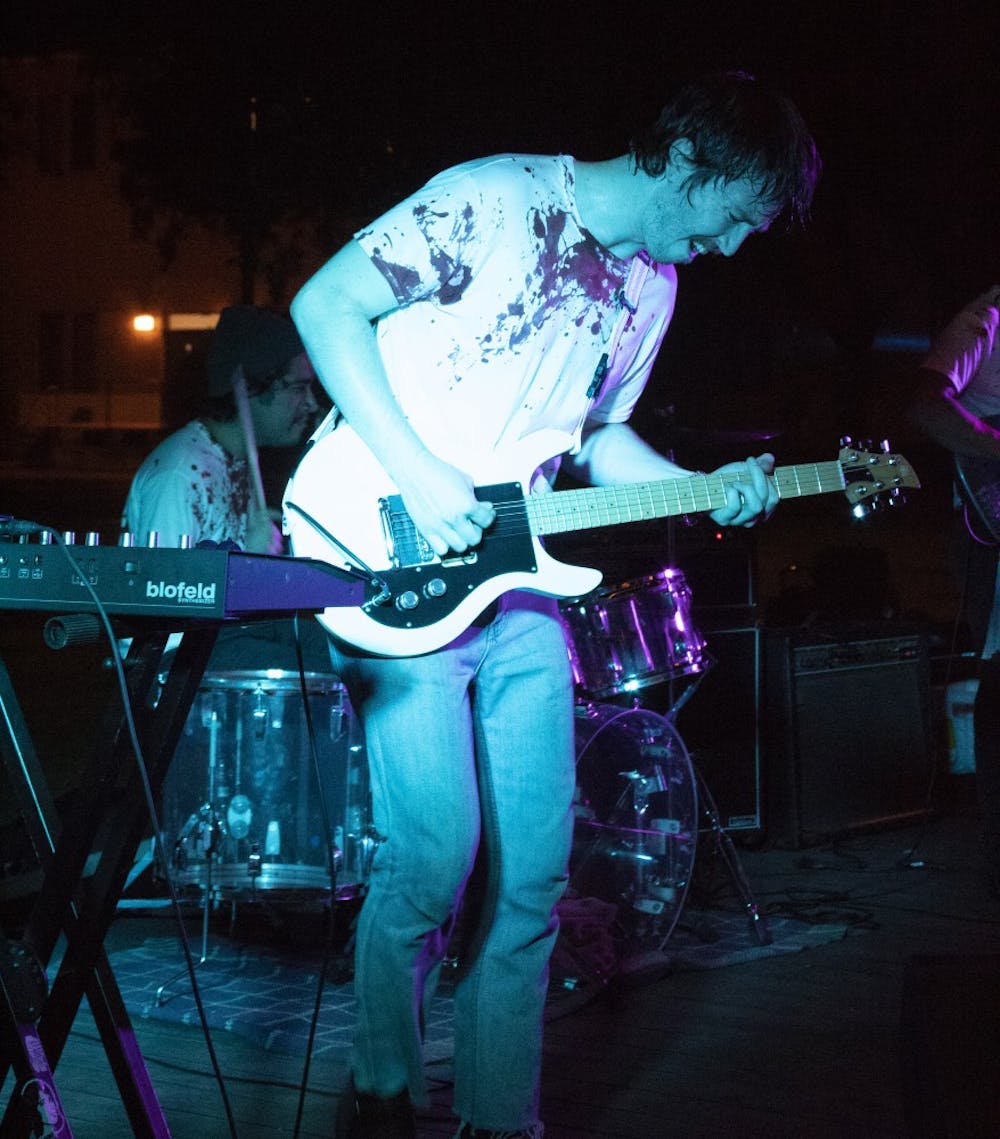 For its second annual Halloween Show, KTRU brought out a large crowd under the Valhalla lights for pizza, merchandise and concert ticket giveaways and live music from fresh Houston talent.

The concert featured musical performances that crossed multiple genres. From hip-hop act Kenner Wells to dreamy ’90s-style rock band Goodgirl to the fun garage rock of Wax Dream, everyone that turned out for KTRU’s music show found something new and inspiring to groove to.

Shelbi Armstrong, small concerts director at KTRU, scouted and reached out to local artists to perform in the show.

“The goal is to bring the Rice and Houston area community together and expose them to local artists and more eclectic music that they might not have heard about before,” Armstrong said.

According to Alice Liu, a Duncan College senior, her favorite aspect of the show was how distinct all three acts were.

“They all had very different energies,” she said. “Purely music-wise, I liked the second one, but the last one was really fun because everyone was dancing.”

The show’s opener, hip-hop artist Wells, started the night off at 7 p.m. to a crowd that hadn’t yet fully arrived. Nevertheless, his rapid flow didn’t dwindle for a moment, setting the upbeat energy for the night.

“I’ve grown up listening to literally every single different kind of music. Now I’m just trying to find a way to blend all of those and rap over the top of that,” he said.

According to Wells, he comes up with a lot of his lyrics on the job while waiting tables.

“The bad thing [about being a new artist] is that it’s very hard to make money,” he said. “There is a lot of competition. But I don’t worry about that too much because every time I get out on stage, it feels like that’s exactly where I’m supposed to be.”

Following Wells, the next act to take the stage was Goodgirl, a ’90s-inspired alternative rock band that nailed the Halloween theme in blood-spattered outfits.

Goodgirl’s dark yet sweetly laced melodies drew the crowd to the front of the Valhalla stage. Their greatest strength was an easy dichotomy of loud and fuzzy guitar offset by the dreaminess of lead singer Valentina Daboin’s vocals. Their music resonated passionate assertions (“I want it all right now”) toned with enough ethereal witchiness to sweep an entranced audience off its feet.

According to guitarist Nate Dietrich, the band’s sound is not tethered to genre because each member draws from diverse influences, including FEELS, Cherry Glazerr, Jessica Lea Mayfield, Grouper, Preoccupations and True Widow.

“What we’re doing now is exploring playing dark music that’s also pretty and has almost a melancholy feel,” he said.

Dietrich emphasized Goodgirl’s creative collaboration, which he said is what makes their music particularly special for him.

“It would not be possible without us as individuals, which I think is what a band is,” he said. “What’s the point of playing with other musicians if you’re not going to all have this hive mind kind of thing?”

For guitarist Gisselle Lizama, spontaneity is an important factor in every live performance.

“From the setlist to the songs to the way it’s arranged, everything that we do, we want to hit you with it, we want you to feel it,” Lizama said. “Whenever we practice, it’s dope because you hear a lot of good stuff, but that’s no guarantee until you play it.”

The Halloween Show concluded with its third and final act, Wax Dream. According to their Bandcamp page, “they have been cracking skulls, unpeeling brains and pouring themselves in all across Texas for the past two years.”

The band members refer to their music as garage rock, with a variety of other influences.

“We try to bring a certain amount of musicianship to an otherwise very straightforward genre,” bassist Connor Mitchell said.

Audience members who stuck around for the final act were treated to the carefree enjoyment brought by the band, who took to the stage completely barefoot. Their danceable blend of catchy melodies, loud guitars and psychedelic sounds ended the night on a high and sweaty note.

According to drummer Chris Collier, their approach to performing live is to be accessible to audiences outside the genre of psychedelic rock.

“We just try to have fun, and hopefully the crowd will connect and also have fun,” vocalist and guitarist Quinn Decker said. “But sometimes they don’t and we’re like, fuck it, we’ll just goof off.”