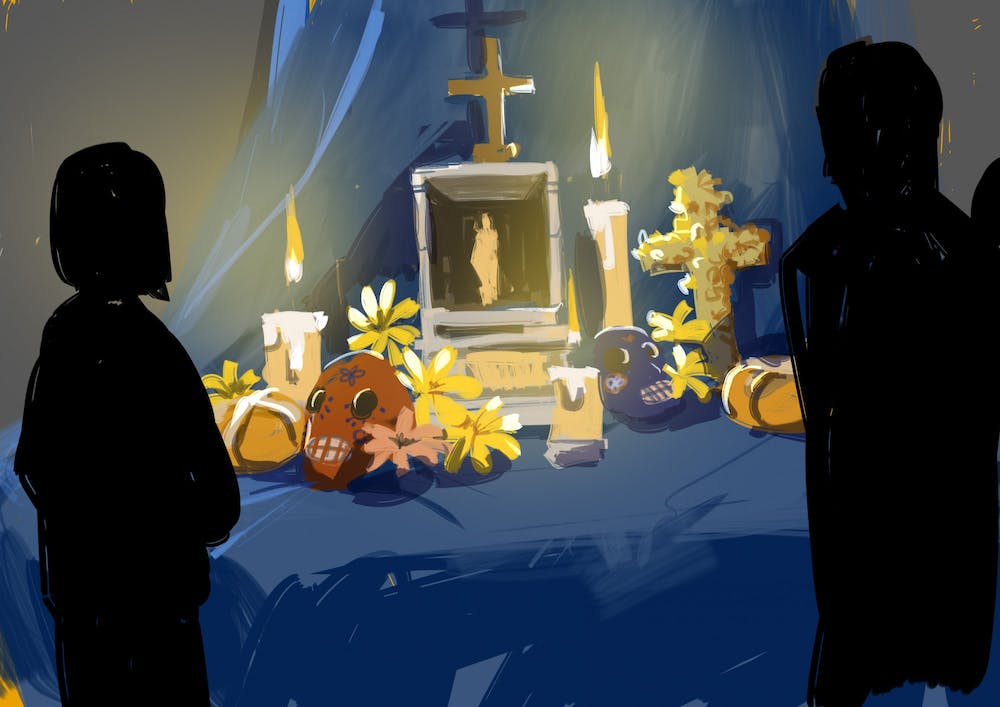 Across from Latinx folk art gallery Casa Ramirez, a large group of around 100 people gathered around on the evening of Saturday, Oct. 26 to watch Danza Azteca Taxacyolotl, a Houston Aztec-dance group. The smell of copal, an incense made of tree resin traditional to pre-Colombian Mesoamerica, was thick in the air. Families lined up holding crosses with pictures of their loved ones at the center, and the crowd followed the Aztec dancers and the beat of their drum down the street towards Casa Ramirez for the gallery’s annual Día de los Muertos community procession.

As I watched, I was instantly transported back hundreds of years, and it is easy to feel the ancient Aztec culture come alive.

Herrera explained that the dance his group performed originated near Mexico City. When the Spanish came, indigenous families hid the dance and practiced it only among themselves to avoid persecution. Eventually, the Catholic church incorporated the dance tradition into their religious festivals in Mexico, and the dance has been revived by migrants to the U.S. who have reintegrated it into their cultural tradition.

Herrera described the procession as a moment for people to reconnect to the indigenous roots of the holiday.

“It’s a mixture of the indigenous and the Spanish, and that’s what’s beautiful about it,” Herrera said. “Even through all the pain and suffering that colonization brought, we are still able to transform that negative energy into something positive.”

According to local resident Jay Francis, Casa Ramirez has been hosting Día de los Muertos events for almost thirty years, and he’s been going to them for almost as long.

While Francis is not Hispanic himself, he said that when his family immigrated to the U.S. from Poland, close family friends also left their hometown to move to Mexico, and that family connection made the Mexican culture a part of his personal development.“En mi corazón, soy Mexicano,” said Francis, which means, “In my heart, I am Mexican.”

The Latinx folk art gallery is owned by Macario and Chrissie Ramirez. According to their website, Casa Ramirez “promotes and celebrates the rich and vibrant Latino culture, especially that of Mexico, Texas and the Southwest, through related exhibits and shows on Latino cultural traditions and the sale of its art, folkart and crafts.” According to Chrissie Ramirez, every year the shop offers lessons on how to build altars, hosts a community Día de los Muertos Procession and showcases community altars in honor of the holiday.

Altars, or ofrendas, are an integral aspect of Día de los Muertos and a longstanding tradition for many Latinx families who wish to honor those who have passed. In addition to adorning altars with flowers and candles, those honoring the dead will also place their deceased loved one’s favorite foods and commemorative tokens from their life such as cigarettes, jewelry, silverware and numerous other mementos.

One of the community altars showcased this year was made by Judy Turner, a local resident. Turner said her altar was inspired by current events affecting women and said she wanted to pay tribute to friends and family with her altar. She shared with me that she has been building community altars at Casa Ramirez for many years; she began doing so after taking a Día de los Muertos altar-building workshop given by the owners. After that experience, she went to Mexico, where she had a touching experience with a man who was cleaning the grave of his eight-year-old sister who had passed after being hit while riding a bicycle. Turner recounted to me how impactful the practice is to her and how it paralleled her own family’s tradition of decorating their family plot for Memorial Day.

The Día de los Muertos procession at Casa Ramirez shows a few things; first, this shop is truly a cornerstone of the Hispanic community in the Heights. It is also a living testament to how open and inviting the shop’s proprietors have been in sharing their culture with Houstonians. At this procession, anyone can interact with ancient traditions alongside new ones. Everything is a mezcla, or a mixture.

What I found most touching was witnessing grandmothers share with their grandchildren the tradition of the altar and ofrendas, watching dancers carry on ancient indigenous traditions and everyone being able to celebrate Día de los Muertos together, regardless of their background.