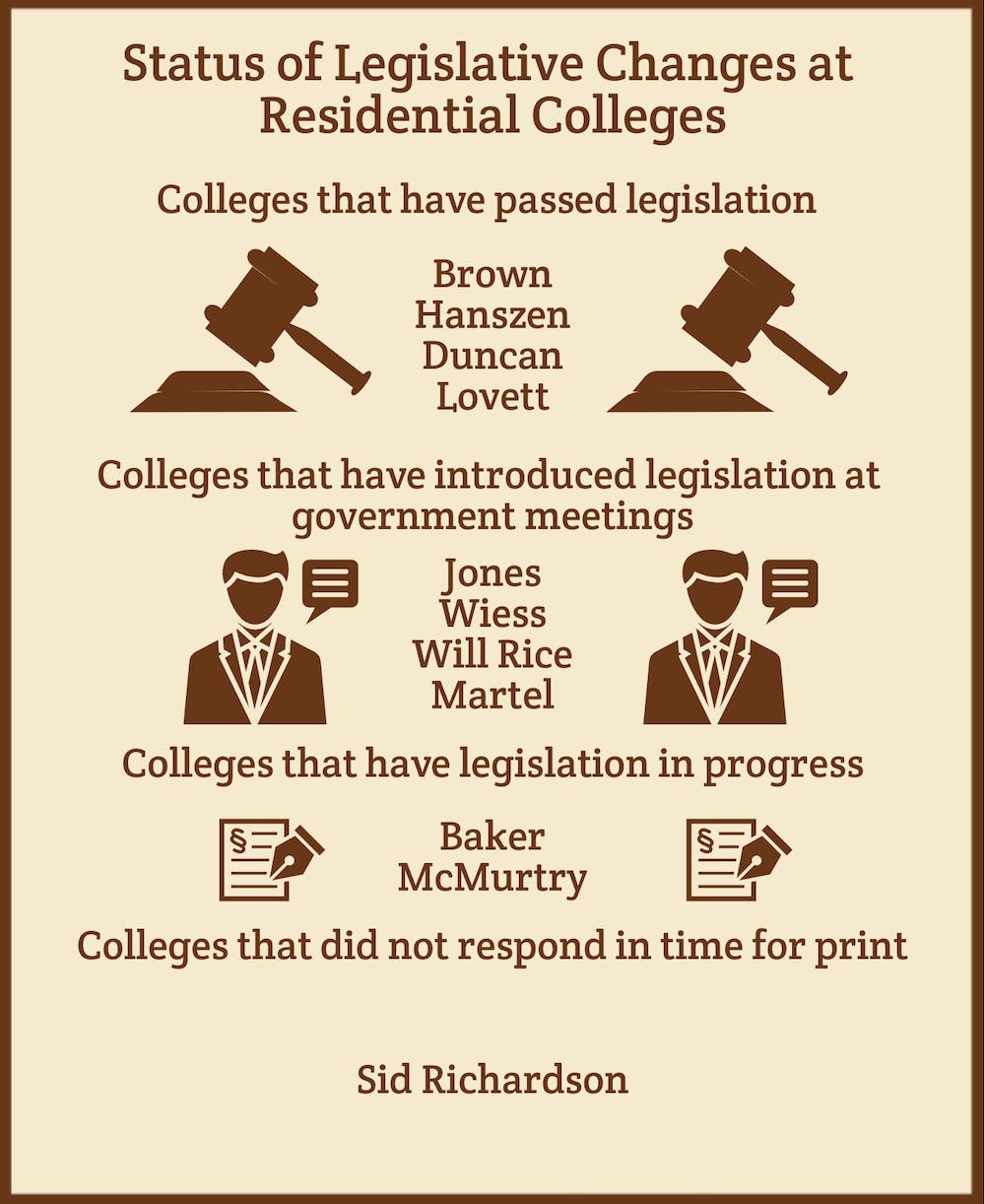 Several colleges have already added or are in the process of adding variations of a constitutional bylaw to create a formal process that prevents students on disciplinary probation from running for leadership positions, according to Hanszen College President Landon Mabe.

Students on disciplinary probation by Student Judicial Programs are already not allowed to run for any leadership positions in university-sponsored organizations, such as the Peer Academic Advising program, according to the Code of Student Conduct. However, a formal mechanism to enforce this has been missing at the residential college level, according to Mabe, a senior. Because Student Judicial Programs decisions are confidential, students serving as college election representatives do not have the ability to verify candidates’ eligibility.

According to Mabe, the Hanszen bylaw would ensure that students on probation would not be able to run for a position. Candidates would have to submit their intent to run to the college coordinator or magisters, who would then send the list of names to SJP to verify their eligibility. Brown College and Lovett College also use this system in their legislation.

The details of the proposed process vary from college to college, but the purpose of preventing students on probation from running for leadership positions is the same, according to Mabe.

Brown was the first to pass such legislation. Brown President Frances Williamson said Brown created a working group last year to write the bylaw, and this group worked with SJP and the Title IX office during the drafting process.

According to Williamson, Brown’s bylaw passed Sept. 24 at the biweekly cabinet meeting.

“We were happy to work with Brown as they drafted accurate and thoughtful language regarding student leadership eligibility,” Emily Garza, director of SJP, said. “If other colleges are considering adopting similar bylaws, I would encourage them to reach out to our office to ensure that their actions are consistent with the Code of Student Conduct and any other policies that might speak to this issue.”

Wiess College President Tim Thomas II said that the legislation was introduced at their cabinet meeting two weeks ago, following Brown’s development of the legislation.

“We have a part of [our] constitution that says students aren’t allowed to be on probation, but nothing in the bylaws that says this gets verified by SJP, which is what will be added,” Thomas, a junior, said.

Mabe said that all colleges are working to implement a form of this bylaw, if the college has not already.

Mabe said the changes arose out of a wider campus conversation about having perpetrators of sexual assault in leadership positions.

“We started looking into this change at the behest of students who were vocal about barring students from running for office who were found in violation of Rice’s sexual misconduct policy,” Mabe said.

“We often have various staff members from different departments on campus contact our office and ask if a particular student would be eligible to hold a certain position in an organization that is affiliated with that office [or department],” Garza said. “If the student is on disciplinary probation, then our answer to that staff member would be that the student is ineligible.”